See the most highlight attractions in Pingyao and surrounding in 2 days. Have an informative trip with your personal tour guide.

Price Per Person in US Dollars

Your private guide will be on time, holding a sign with your name on it and waiting for you at the exit of the train station. A comfortable private car (non-smoking) and experienced driver will transfer you to your hotel in the ancient town.

After check-in, you will start the half-day trip in China's best preserved ancient walled town — be ready to experience the shock of the rich culture.

The Rishengchang Former Bank is the site of the first draft bank in China. Your tour guide will explain how the bank operated, and it will be interesting to see what banking used to be like 150 years ago.

Under the environment of social unrest in the poor Qing Dynasty (1644–1911), the protection of the tangible currency was extremely important; therefore, escort companies appeared. Pingyao was the birthplace of Xing Yi Quan (shape and impression boxing, which is a kind of Chinese kung fu). The Armed Escort Company Museum shows how this special business was formed and how it was run, and also introduces the top 10 escort companies and top 10 guards — they were all kung fu masters.

After seeing the highlights of the ancient town, it is great to go up high and have a view of the roofs of the ancient buildings. You will go up to the Ancient City Wall at dusk, and have a glimpse of the town before darkness arrives.

Have dinner in the Mingqing Street area, which is the most prosperous area in the ancient town. The lanterns are all on at night, and it is very lively there in the evening.

Good to Know:
High-speed trains from Beijing and Xi’an will arrive in Pingyao at noon or in the late afternoon. Depending on your arrival time, your tour guide might adjust the visiting order of the attractions. Your travel advisor will also give you suggestions.

The Shuanglin Temple is about 10 minutes driving distance from the ancient town, today we will start from it. It has over 2,000 colored mud sculptures, and considered to be the “unrestored glory” of Pingyao.

Then you will drive in a southerly direction for one hour to the Wang Family Courtyard. Lunch will be arranged in a local restaurant on the way — your tour guide will assist you with reading the menu and ordering the dishes, and you will taste the most authentic local food.

The Wang’s Family Compound has a nickname — the Forbidden City in Folk. Different from the famous Qiao’s Family Compound, the Wang family was an official family, which had a higher social status. The family’s generations lasted for over 300 years and built the compound that is approximately 250,000 square meters in size, among which 45,000 square meters (one fifth) is open to tourists. There are 123 courtyards and 1,118 rooms. You will spend about two hours there.

After the visit to the Wang’s Family Compound, your guide and driver will take you to the train station and say goodbye.

An optional extra is to spend an half day exploring Zhangbi Ancient Village. Zhangbi Ancient Village, or Zhangbi Ancient Castle, is located approximately 1½ hours' drive from Pingyao Ancient Town. With an area of approximately 12 square miles, it was initially established as part of a military defense system. Its underground tunnel was scientifically constructed according to ancient Chinese astrology. Temples and old buildings are dotted around the village.
If your time permits, it is suggested to visit the Zhangbi Ancient Village and the Mian Mountain in a full day.
Mian Mountain is the birthplace of national cultural heritage. The mountain is noted for its natural and cultural scenes, especially for its cultural relics, including Cold Food culture, Buddhist culture, Taoist culture and health preservation culture. Covering an area of 75 square kilometers, the mountain is a national scenic spot with 14 tourist areas and 400 attractions. It is worth visiting in any season. Visitors are able to participate in local traditional activities and watch folk performances.

Pingyao is a small destination that suitable for a weekend trip. Benefited from the high-speed train, it’s convenient to take a bullet train directly from Beijing/Xian. Tell us your travel date, and we are happy to book the trains for you! . 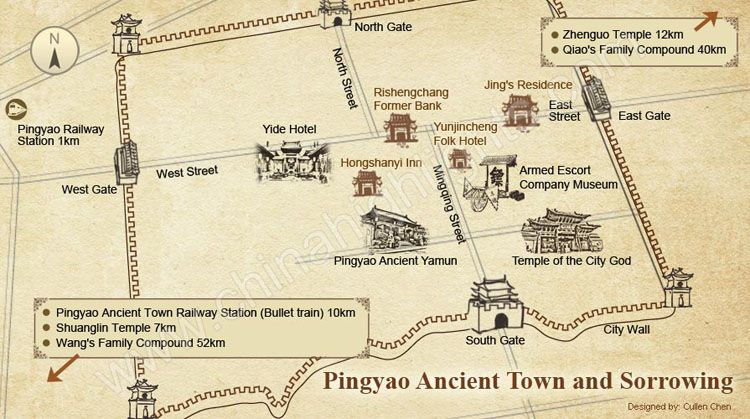 Most hotels and hostels in the ancient town are in traditional Chinese style, you will see antique courtyard and wooden furniture, and even have a chance to experience sleeping on a “kang”-- heatable brick bed that popular in North China. Extra quilt can be required to soften the bed.

Our 1 to 1 private travel advisors will give you professional suggestions, you can alter the itinerary, extend or shorten it to suit your price, interest and schedule. Feel free to tell us your requirements, and we are happy to help you arrange with our professional knowledge and experience.

We now offer 3 payment methods: PayPal, credit card authorization via fax and wire transfer. PayPal is recommended for its safety and efficiency. You can pay USA dollars, Australian dollars, European dollars and Great Britain Pound directly with your credit card or debit card, even if you don't have PayPal account.