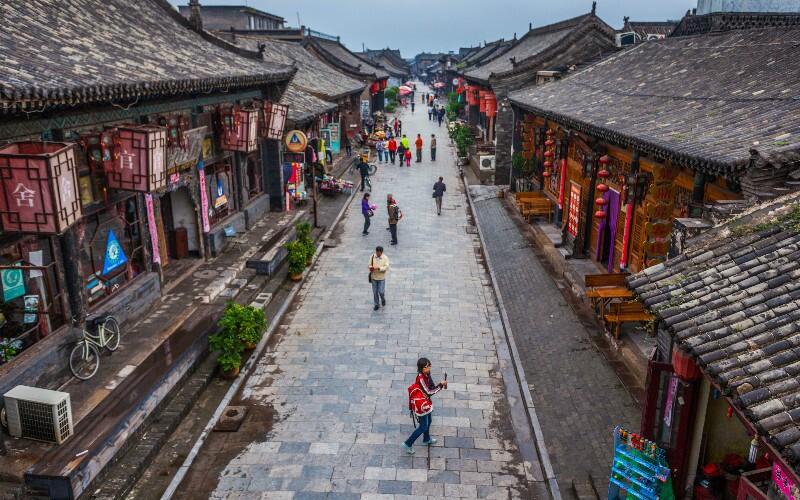 Pingyao Travel Guide - How to Plan a Trip to Pingyao

The ancient town of Pingyao is an outstanding example of a Han Chinese city of the Ming and Qing Dynasties. Together with the ancient city of Lijiang in Yunnan, the ancient city of Langzhong in Sichuan, and the ancient city of Shexian in Anhui, Pingyao Ancient Town is known as one of the "Four Best Preserved Ancient Cities" in China. Pingyao was added to the UNESCO's World Heritage List on December 31st, 1997.

5 Top Things to Do in Pingyao

Rishengchang Draft Bank is in the prosperous area of West Street, the "first financial street of the Qing Dynasty" in the ancient city of Pingyao. It was founded in 1823 and it became the first bank chain in China. From that time on, its business outlets opened in almost all areas of China. Now, Rishengchang has become a museum of Chinese banking, showing the glorious history of Chinese ancient banking.

3. Shop around Ming-Qing Street — the Wall Street of China

South Street, also known as ‘Ming-and-Qing-Dynasties Ancient Street’, is the central axis of Pingyao Ancient City. During the Ming and Qing dynasties (1367–1912), South Street controlled more than half of the financial institutions in China and was known as the ‘China’s Wall Street’ of that period. Now it is still the most prosperous place in Pingyao.

Pingyao’s ancient city wall, about 6 kilometers (4 miles) long, is one of the best-preserved city walls in China. If you want to take photos from the wall, it is recommended to go in the evening. The view of the old houses at the sunset is amazing.

Wang’s courtyard, about 35 km (22 miles) from Pingyao Town, was built in the Ming and Qing dynasties, and its prominence lasted for more than 300 years. It includes five lanes, six castles, and one street, with a total area of 25 hectares (about 10 city blocks). Wang's courtyard is a big medieval building complex and it is known as an architectural art museum with traditional cultural characteristics.

Pingyao County has a temperate continental semi-arid monsoon climate with four distinct seasons. The hottest month in the year is July, and the daily average temperature range is 20–31°C (68–88°F). The coldest month is January with an average daily range of -12–2°C (11–35°C). Its annual average precipitation is a low 415 mm (16”), mainly falling from July to September.

May to October is the best time to visit Pingyao, when the temperature is comfortable, i.e. not freezing (if you don’t mind the cold, the off season has few crowds and lower prices).

Pingyao features on The Five Best Places to Visit in China’s Cool September.

Two important Pingyao festivals are held during the warmer months:

Booking hotels etc. is always tight during the photography festival. Contact us early to book a Photography Festival trip.

Pingyao Crouching Tiger Hidden Dragon International Film Festival is held yearly in the middle of October. During the festival, you can appreciate excellent globally-recognized film works in Pingyao Festival Palace.

When would you like to travel to Pingyao? Please let us know and we will tailor a Pingyao trip to your individual requirements.

How to Get to Pingyao Ancient City

There is no airport in Pingyao, but you can fly to the nearest airport, Taiyuan Wusu International Airport. The airport is about 100 km (60 miles) or 2 hours’ driving from Pingyao Ancient City. You can visit the Qiao Family Compound on the way when driving from Taiyuan to Pingyao. We would like to arrange the private transfer for you from Taiyuan airport to Pingyao

Contact us to effortlessly sort out your Pingyao journey.

Where to Stay in Pingyao

Hotel accommodation in Pingyao County is divided into two types: inside and outside the ancient city. The hotels inside the “city” are typically folk inns with Ming/Qing-dynasty styles. Those outside Pingyao Ancient City are mainly of modern hotel chains like “Express” hotels.

Usually, we recommend hotels inside Pingyao Ancient City, which are nearer to the attractions and more convenient for shopping. We usually use these hotels:

The Story of Pingyao's Name

Pingyao was called Ancient Tao before the dynasties of Qin (221–206 BC) and Han (206 BC – 220 AD). According to ‘The Records of Pingyao County’, it had been the location of manor of Yao, who was the king of a union of tribes in ancient China.

In the Spring and Autumn Period (771–476 BC), Ancient Tao belonged to the Jin Kingdom, and later to the Zhao Kingdom. The county system replaced the manor system when the First Emperor of Qin unified China in 221 BC. Ancient Tao was then set as a county town and its name was changed to Pingtao.

In the early Northern Wei Dynasty (220–280 AD), Pingtao was renamed Pingyao to avoid the pronunciation “Tao”, because the emperor of the time was named Tuoba Tao. According to ancient rules, the name of an emperor, high official, head of a family, or elder of a clan was regarded as taboo by his subjects or juniors.

The History of Pingyao's City Wall

According to historical records, in the Western Zhou Dynasty (1045–256 BC), the King of Xuan dispatched his general Yin Jiefu to fight invaders of other kingdoms. General Yin stationed his troops in Ancient Tao and constructed a defensive wall there.

It wasn’t until the early Ming Dynasty (1368–1644), from the year 1370, that the new government enlarged and reconstructed the city wall to provide greater space for military purposes. In the following 500 years of the Ming and Qing (1644–1912) dynasties, the wall was reconstructed and repaired 26 times or more, but its basic style and size remained without many changes.

The magnificent wall has been standing there for over 600 years through the flames of war and natural weathering. Glints and flashes of swords and spears as well as flames and explosions of war all have become things of the past. The military function of the strong and high city wall has become redundant.

Now, the old wall presents to later generations a reminder of the changing dynasties and the events that occurred in the past three thousand years.

For a top-quality experience, whether you are a photographer, history enthusiast, or any type of traveler, we can tailor-make a hassle-free China tour including Pingyao Ancient City for you. Tell us your requirements and we will create a tour specially for you.

Maybe start with some inspiration from these recommended tours: