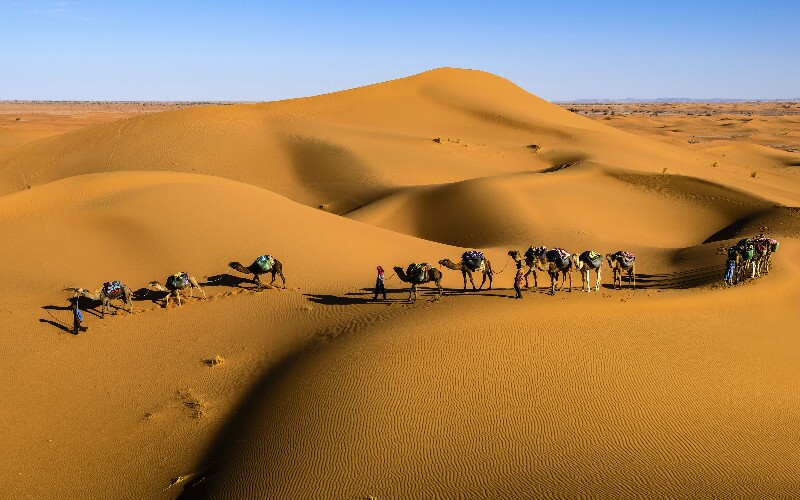 China has a vast land. There are not only magnificent rivers, lakes, mountains and forests, but also boundless deserts.

The desert is a good place for relaxation and enjoyment. In the desert, there are beautiful sunrises and sunsets, a starry sky, and exciting desert activities.

The following is an introduction of the top five most beautiful deserts in China for you. 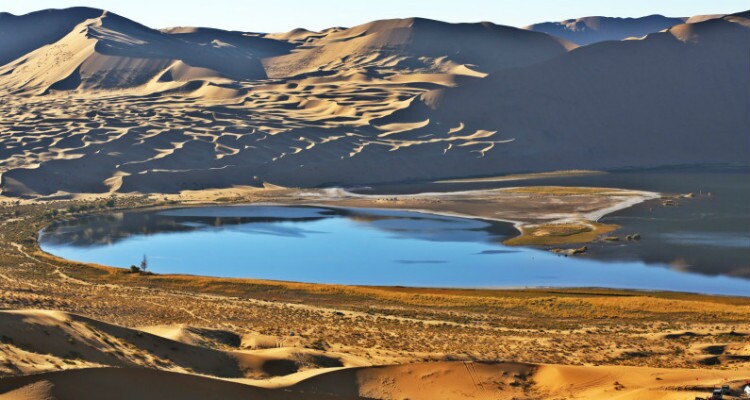 "Mount Everest of the Desert"

The sand dunes present a marvelous spectacle, like a vast sea with huge waves and high ancient pagodas. Badain Jaran Desert is the hometown of the highest sand dunes in China, even in the world, with the relative height being 200 to 500 meters.

"The World Kingdom of Singing Sands"

Singing Sand Mountain, as high as 200 meters, enjoys the reputation of being "the World Kingdom of Singing Sands". The peaks are steep, and the sand ridges are as sharp as knife-edges, being randomly scattered. The sound made when the sand falls roars over the area within several kilometers.

The desert is dotted with as many as 113 lakes, of which 74 are lakes filled with water all year round and 12 are freshwater lakes. The total area of lakes is 32.67 square meters. Filled with reeds, birds and fish, the lakes are reputed as being "the South of the Northern Desert Areas".

“Living Fossil of the Art World”

In the eastern and south-western edges of the desert, the vast Gobi stretches beyond the horizon. The landscape of oddly shaped weathered stone forests, wind eroded mushroom stones, honeycomb stones, wind eroded stone pillars and the Grand Canyon is breathtaking. A vivid record of hunting and ranching, the rock paintings of Mandela Mountain are known as the "living fossil of the art world".

In addition to the desert landscape, there are various things to do in Inner Mongolia such as visit the beautiful grasslands, take part in Nadam Fair (usually falls on middle of July in summer and December 23th in winter), and admire the splendid golden Euphrates poplar forests in Ejina Qi. 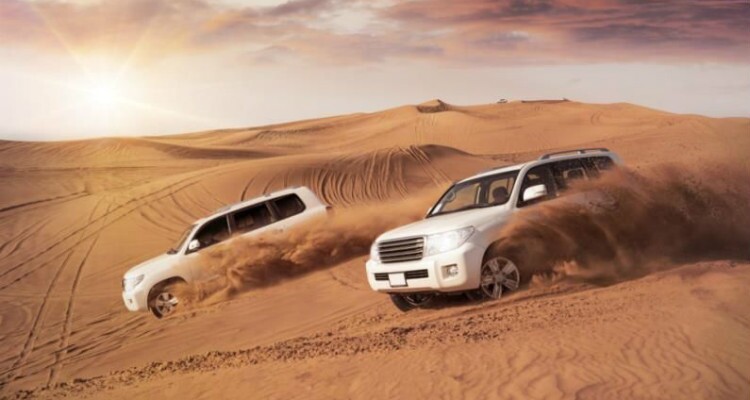 Shapotou Desert is located at the north shore of the Yellow River and at the southern edge of the Tengger Desert, 20 kilometers west of Zhongwei City.

During the regime of Qian Long, a king in the Qing Dynasty, a huge sand bank of 2,000 meters wide and about 100 meters high came into being on the river bank, thus getting its name of "Shatuotou", later called "Shapotou".

The 100-meter Shapo, namely sand slope usually has a 60-degree slope. When it is sunny and the temperature rises, a person sliding down the Shapo would give rise to a roar "hum-hum-hum" as loud and clear as a ringing bell. As a result, it is praised as the "Shapo Ringing Bell", one of the four singing sands in China.

When you stand at the foot of the Shapo and look up, you will see the sand flowing like a waterfall, and feel the enjoyment of hearing a ringing bell and the care freeness of riding the sand, like falling from heaven. 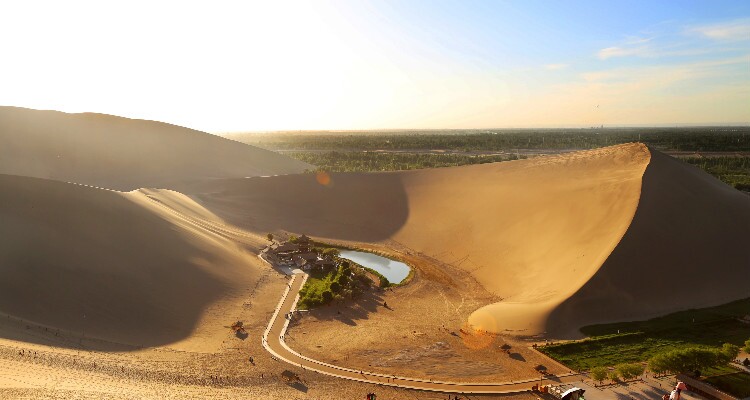 Dunhuang is one of the famous cities along the ancient "Silk Road". The Singing Sand Dunes are five kilometers away from the southern city and are famous for producing sound when the sand moves.

The mountains resulted from sand accumulation. The sand has five colors, namely red, yellow, green, white and black. The mountain range stretches about 40 kilometers from east to west, and 20 kilometers from south to north. The main peak is 1,715 meters above sea level. The sand falls several feet, but recovers exactly as it was, which is rarely seen in the world.

In a green basin surrounded by the Singing Sand Mountain range is a spring of clear water of about 300 meters long, 50 meters wide and 5 meters deep. The shape of the spring looks exactly like a crescent, hence its name of Crescent Moon Spring.

The spring is surrounded by the Singing Sand Mountain range on all sides but is not covered by them. It always remains rippling and clear. It never overflows even it rains for a long time. Nor does it dry up even if there has been a drought for a long time. The scenery is magnificent. The unique landform of the coexistence between the sand and the spring is indeed a "world wonder". 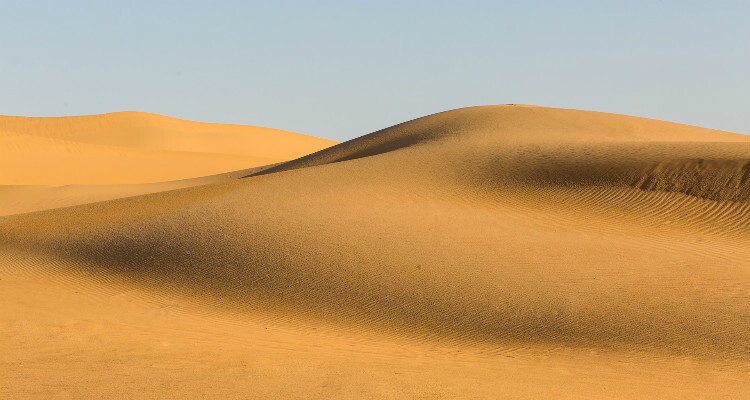 Taklimakan Desert is located in the center of Tarim Basin. It is 1,000 kilometers long from the east part to the west end, and 400 kilometers wide from the south to the north. The total area is 337, 600square kilometers. It is the largest desert within the territory of China. As a result, it is called "Taklimakan Desert".

In addition, it is also the second largest shifting sand desert in the world after Rub' al Khali Desert in the Arabian Peninsula. Taklimakan, which means "go in and you will never come out" in the Uygur language, is also known as "the Desert of Death".

The shifting sand dunes in Taklimakan Desert are of a vast size, with a height of 100 to 200 meters in general, and around 300 meters at most. In the interior of the desert, the sand dunes are of a great variety. Their shapes change unpredictably, ranging from towers to beehives, to feathers, to fish scales.

There are two huge sand dunes that are clearly-colored with red and white, also called Mount Shengmu. They took shape after the sedimentary rocks made up of red sandstone and white gypsum were chopped out. The wind eroded mushrooms in Mount Shengmu are spectacular. As high as about 5 meters, around 10 people can fit under the huge covers.

During the day, the sun blazes down, the silver sand dazzles, and the sand temperature reaches 70-80 degrees Celsius. Due to the strong evaporation, the plants on the surface are drifting. Often visitors can see a hazy mirage that appears from afar.

On the east of Taklimakan Desert there exists a huge bowl-shaped piece of land, known as the Turpan Basin. On its edges are ruined cities built around the year 200 BC, standing right on the ancient Silk Road. Until the 15th century, the trade route, about 6,400 kilometers long, was still extending between the Mediterranean countries and China. 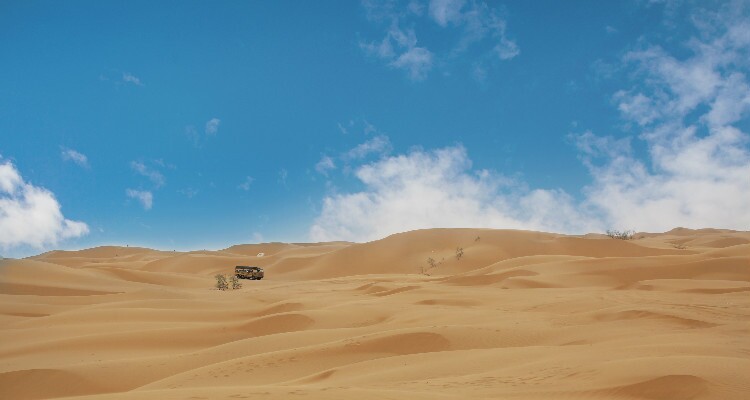 Gurbantunggut Desert is at the center of Dzungarian Basin of Xinjiang, to the east of Manas River and to the south of Ulungur River. It is China's second largest desert, but the largest fixed and semi-fixed desert. It has a total area of about 48,800 square kilometers, an elevation of 300-600 meters, and a sufficient source of water.

There, deserts are intermixed with oases, forming a unique natural and manmade landscape. On the one side are flora known as Populus diversifolia and Haloxylon ammondendron, Mongolian gazelles and ancient natural ecology; on the other side are tractors, electric wells, irrigation and modern oasis civilization. On the one hand there are stretching sand dunes, still sounds and rare life, while on the other hand there are green sceneries, songs and laughter, and vital scenes.

All our tours can be customized. If you are not interested in the above destinations or tours, you can contact us to tailor-make a  tour for you.

travel guide Top 6 Places to Visit in January in China