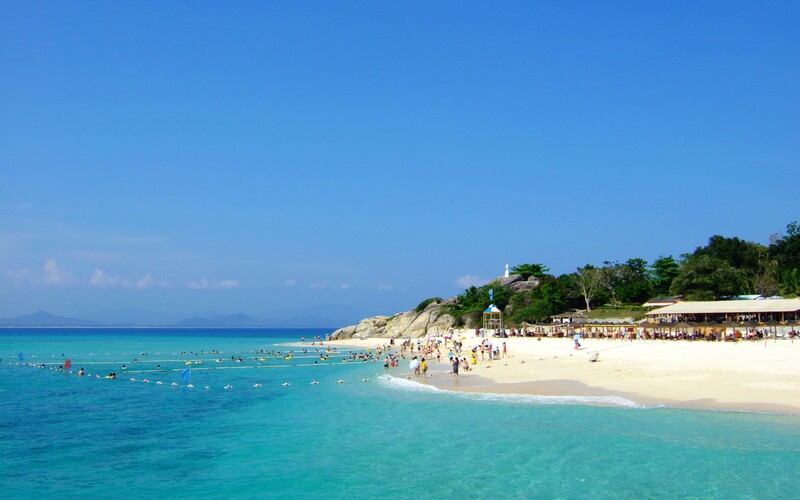 The Six Most Beautiful Islands in China

The following are a list of the six most beautiful islands in China besides Hainan Island and Taiwan Island. One of them (the Xisha Islands) has not opened to travelers yet. However, according to the latest news, it is said that the Xisha Islands will open to tourists in the near future, and then China Highlights will update you with related travel tips and tours of the Xisha Islands.

Also Read the most beautiful lakes in China.

The Xisha Islands are a group of islands under the administration of Hainan Province, consisting of 22 islets, 7 sandbars, and more than 10 submerged reefs, with a total land area of about 10 square kilometers. The largest island is Woody Island, where there are two museums: a Naval Museum and a Maritime Museum.

The Xisha Islands are situated about 180 nautical miles southeast from Hainan Island. They are surrounded by productive fishing grounds and potential oil and gas reserves. Due to the hot and humid climate, the average temperature of the islands is about 27°C (81°F), and the islands have abundant rainfall and frequent typhoons.

2. Weizhou Island, an Artwork Made by Water and Fire

Weizhou Island is China’s the youngest and largest volcanic island, covering an area of about 25 square kilometers. It is about 21 nautical miles south of Beihai City. There are about 2,000 households (about 160,000 people) living on the island, and more than 75% of them are Hakkas.

Natural landscapes made by marine abrasion, marine deposition, and karst add more attractions to this volcanic island. The south natural harbor caused by volcano in ancient times is the most unique part.

Best times to travel: April, May, and October are the best times to travel to Weizhou Island. During these months, the weather is mainly sunny without typhoon, the temperature is moderate, and the ultraviolet rays are not very strong. The period from June to August is very hot, and the island will be crowded because of the summer holiday. Tthe period from April to November is good for swimming in the sea.

3. Putuoshan Island, a Buddhist Holy Land on the Sea

Putuoshan Island is well-known for its profound Buddhist culture, as well as the clear sea water and beach, and peculiar-shaped rocks, old trees, and wide sea landscape. The most popular two temples on the island are Puji Temple and Fayu Temple. The best two beaches are Baibu Beach and Qianbu Beach, because of their fine sand.

Putuo Mountain is the highest peak of the island, rising about 288 meters. It is one of China’s four famous Buddhist Mountains (another three are Wutai Mountain in Shanxi Province, Mount Emei near Chengdu City, Mount Hua near Xi’an City). The island is about 100 nautical miles east from Zhoushan City.

4. The Penghu Islands, or Pescadores Islands

The Penghu Islands consist of 64 islands in the southeast of the Taiwan Strait, covering an area of about 127 square kilometers. The three highlights in the islands are the Pavilion of Avalokitesvara (观音亭), Shuncheng Gate (顺城门), and Confucian Temple (孔庙).

All the Penghu Islands are volcanic islands. The highest island is the Cat Islet (猫屿), rising about 79 meters above sea level. The largest three islands are Penghu Island (澎湖岛), Yuweng Island (渔翁岛), and Baisha Island (白沙岛).

The Penghu Islands are governed by Penghu County, which has a population of about 90,000. Ship transport and air transport are the only two ways linking Penghu County and other places, including Taiwan and the Chinese mainland.

Dayushan Island covers an area of about 21 square kilometers. The highest peak of the island is Hongjidong Hill, rising about 541 meters. There are two lakes in the island, with the altitude of about 200 meters. The two lakes are about one kilometer apart, and are surrounded by gentle hillsides covered with grasses. All of these gift the island a graceful grassland landscape.

Hiking and camping are the most popular activities on the island. The lakesides are great camping destinations with peaceful water and grassland scenery. Remember to bring mosquito repellent and not to swim in the sea, because of the dangerous currents.

You can visit and eat with the local families. Their main food is marine products. A holiday village and small hotels with basic conditions are also available on the island.

The Nanji Islands comprise 52 islands, and the main one is called Nanji Island. It is about 30 nautical miles from continental China. The population of the island is about 2,000.

There are more than 40 attractions on the islands, including peculiar rocks, beaches, temples, and the former residence of Song Meiling. Most of these attractions are located in Sanpanwei Village (三盘尾村). Sanpanwei Village is the essence of the Nanji Islands, and the recommended duration for a visit is about 3 hours. It is also a nice place to see the sunrise over the sea.

Leisure is the main theme of the island. Recommended things to do on the islands are appreciating the wide sea landscapes, fishing, hiking, tasting marine food, and experiencing local folk customs.