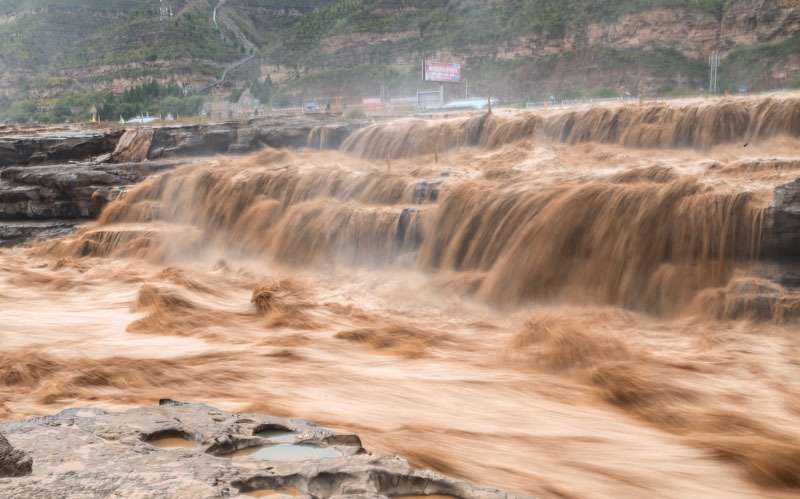 The Yellow River (Huang He in Mandarin or Huang Ho in defunct Wade-Giles or Hwang Ho) is the second longest river in China (after the Yangtze), and fifth longest in the world, with a length of 5,464 km (3,395 miles).

The Yellow River originates on the Qinghai-Tibet Plateau and flows through nine provinces from west to east, flowing into Bohai Sea. It is the "mother river of China": its basin was the center of Chinese politics, economy, and culture for over 2,000 years.

Quick Facts about the Yellow River

Where Is the Yellow River?

The source of the Yellow River is in the Bayankhara Mountain on the Qinghai-Tibet Plateau in Qinghai Province. It flows through Qinghai, Sichuan, Gansu, Ningxia, Inner Mongolia, Shaanxi, Shanxi, Henan, and Shandong (provincial level regions) from west to east, and finally flows into the Bohai Sea, (roughly) in the shape of the Chinese character of “几”.

Where the Name "Yellow River" Came From

The name "Yellow River" comes from the huge amounts of "yellow" loess sediment it carries, which are eroded when it flows through the Loess Plateau. It is the world's major river with the most excessive siltation.

Why Is the Yellow River Yellow?

The Yellow River is yellow because of the great amount of yellow silt suspended in the river. The yellow silt (loess) mainly comes from China’s Loess Plateau.

The destruction of forests has turned many grasslands and woodlands into deserts, with the result that the thick loess is exposed. Loess is very loose fine soil, and after long-term erosion by runoff and river water, sediment is carried into the Yellow River, turning its water yellow.

It can be said that this is the price of development from a hunter-gatherer civilization to a farming civilization with a growing population.

The average flow rate of the Yellow River is 1,800 cubic meters per second. Its biggest tributary is the Wei River, which flows past Xi'an.

The Upper Reaches of the Yellow River

The Yellow River’s upper reaches, about 3,500 km (2,000 mi), include the upland swamps and pastures of the Tibetan Plateau in Qinghai Province and gorges in foothill country up until it leaves the valleys for the Gobi Desert in Inner Mongolia.

In Qinghai Province, the Yellow River mostly flows over the “roof of the world” plateau of three or four kilometers (2 miles) high. By its banks are mostly lakes, marshes, and grassy meadows, and its water is relatively clear.

In the section from Qinghai to Ningxia, the Yellow River flows through steep valleys and cliffs. The river is fast flowing and treacherous. Most of the Huang He’s hydropower stations are built on this section of the river.

The Yellow River’s middle reaches are about 1,200 km (700 mi) long from Inner Mongolia to Zhengzhou, negotiating plains and hills on China's Loess Plateau region, where huge amounts of sediment are eroded and suspended.

There can be found the yellowest (the most sedimented) waterfall in the world — Hukou (‘Kettle’s Mouth’) Waterfall.

The Yellow River’s lower reaches, from Zhengzhou to the Bohai Sea, stretch about 800 km (500 mi). Due to sediment accumulation, the riverbed is several meters above the cities and farmlands around it, forming the world-famous "above ground river"!

The Yellow River is not just an iconic river of China, but also the symbol of the Chinese spirit: bearing burdens (its sedimentation), adaptation (its course changes), and perseverance (its continual flow).

The Yellow River is also called "China's Sorrow". Each year, over 1.6 billion tons of soil flow into the Yellow River, which causes the continual rise and shift of its riverbed. Before damming, it was extremely prone to flooding, and caused millions of deaths, including the deadliest disaster in human history.

What to See along the Yellow River?

Along the Yellow River, there are numerous historical and ancient attractions and stunning scenery.

Sanjiangyuan (‘Three Rivers’ Origins’) Natural Reserve is in southern Qinghai. The three rivers are the Yellow River, the Yangtze River, and the Lancang River (which becomes the Mekong in SE Asia).

It enjoys the moniker ‘China's Water Tower’ and a richness of landscapes including mountains, glaciers, lakes, and valleys. See 5-Day Northern Sichuan Tour.

Tangke Town lies on the border of Gansu and Sichuan provinces. There you can see the First Bend of Yellow River. The Yellow River is surrounded by a vast prairie.

Endless wetlands are dotted with beautiful lakes. An abundance of birds fly over the rose willows there. See 6-Day Xiahe, Langmusi, and Zhagana Tour.

The water upstream of the falls is 300 meters wide and is compressed to a width of 20–30 meters over a distance of less than 500 meters. The Yellow River pours 1,000 cubic meters per second over a steep cliff more than 20 meters (65 feet) high.

Qinghai Lake is China’s biggest lake and one of the most beautiful lakes. The pure blue lake is surrounded by fields of rape flowers in spring. Beyond are snow-capped mountains as far as you can see and white clouds in the sky. Qinghai Lake is also a sacred lake for Tibetans and Tibetan Buddhists. By traveling to Qinghai Lake, you can get close to the devoted Tibetans and appreciate Tibetan culture. See 8-Day Qinghai Lake, Zhangye, and Dunhuang Tour.

Shapotou in Zhongwei has "the first Yellow River ropeway" across the Yellow River and has the experience of sheepskin rafting — the oldest ferry method for crossing the river.

There are all kinds of exciting activities available, including sand sledding, camel trekking, dune buggying, and more. You can also explore further northwest into the Tengger Desert, the fourth largest desert in China.

What Troubles is the Yellow River Facing?

The first one is drought. With global warming leading to decrease in rainfall in the Yellow River Basin, and increasing water demands for irrigation, industry, etc., the Yellow River has been used up by its lower reaches since 1972, when it ran dry for the first time in recorded history. The longest dry period lasted 226 days in 1997.

The second one is pollution. The Yellow River has become so polluted in some reaches that it is unfit for agricultural and industrial use, because of the huge increase in factory and sewage discharges from China's fast-expanding cities.

China’s government is taking measures to deal with Yellow River pollution, such as setting limits on the volume of major pollutants discharged into rivers and lakes and controlling overuse of water resources.

Touring the Cities along the Yellow River

Along the Yellow River, there are many worthwhile attractions and many tourist cities, such as Lanzhou, Zhongwei, Yinchuan, Baotou, Yan'an, Luoyang, Zhengzhou, and Kaifeng. See these popular itineraries for inspiration:

Or contact us to create a trip based on your needs.