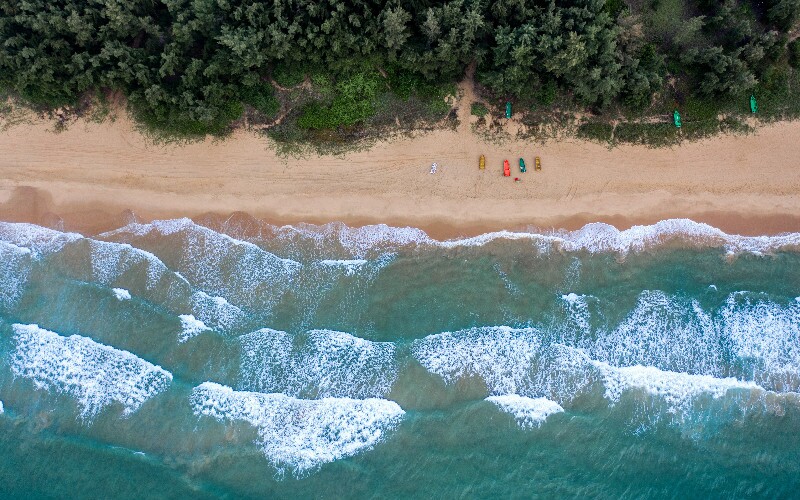 6 Most Beautiful Beaches in China

China's continental coastline extends for about 18,000 kilometers (11,000 miles), and there are lots of beautiful beaches for holidays. The most popular beaches around China we recommend include those at Sanya, Xiamen, Putuo Island, Beidaihe and Beihai.

Yalong Bay is the best beach in China. The sea is blue and the sand is soft. You are advised to go to the private beach of your hotel as the public beach is always crowded. Many international hotel groups have established top-end hotels in Yalong Bay.

Read more about How to Plan a Trip to Sanya

Located in Haitang Bay, Sanya, Wuzhizhou Island is the Maldives of China. The beautiful scenery all over the island includes "Plants World" and the colorful "Underwater World". You can dive into the sea and discover the underwater world. But be warned: if you want to dive, you'd better get there early as there is always a long line.

Two historical relics, namely the Matsu Temple and the Guanri Cliff, are the must-see spots.

Around 1 hour by driving from Beidaihe, you can reach the Laolongtou Great Wall Section. It is where the east end of the Great Wall of the Ming Dynasty meets the Bo Sea. It's part of the Shanhai Pass Great Wall defense system covering mountains, sea, plain, and town.

From Beijing to Beidaihe Scenic Area: about 3 hours by bullet train or by driving

Gulangyu Island is an island of leisure. It is an island of pianos — there are 600 pianos on the island, and a world architecture expo of interesting, well-kept buildings. Gulangyu Beach can show you the easy life. Slow down and take your time to feel the beauty of life. You can also go and see the historical sites around.

Tianya Haijiao (Heaven's Edge Sea's Corner) in Sanya, on South China's Hainan Island, is one of the most romantic and picturesque beaches in China. It is considered to be the southernmost tip of China. It is a must-see attraction for new Chinese couples because of old Chinese literature saying: "I will follow you to Tianya Haijiao", which means the couple will be together forever.

Be warned: this place may be very crowded all year round.

Read more about How to Plan a Trip to Sanya

Putuoshan Island not only has a rich religious culture, but also romantic beaches. It is honored as "the purest land in the world". Walking on the beach and picking up a shell, you can find tranquility in the sound of the sea. Hundred Step Beach and Thousand Step Beach are the two most famous beaches on Putuoshan Island.

Contact us to tailor make a Putuoshan tour from Shanghai or near around.