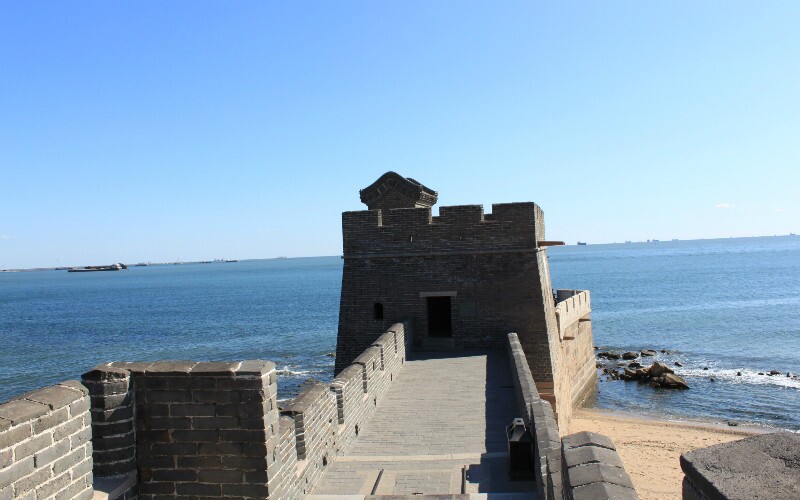 At Laolongtou the Great Wall meets the sea..

Laolongtou ('Old Dragon's Head') is where the east end of the Great Wall of the Ming Dynasty meets the Bo Sea. It's part of the Shanhai Pass Great Wall defense system covering mountains, sea, plain, and town.

The Great Wall at Laolongtou is like a huge dragon lying with its head on the beach and mouth in the sea. The square watchtower on the beach looks uncannily like a raised reptilian skull when viewed at a distance, along with the seaward wall extension, resembling a mouth, and the narrower landward wall resembling a neck. During the reign of Emperor Hongwu (1368–1398), in order to defend against the looting and harassment of China's Manchurian neighbors at the border, General Xu Da acted under orders to construct the Great Wall around Shanhai Pass, including Ninghai Fortress at Laolongtou.

In 1670, the 9th year of the reign of Kangxi, Chenghai Tower was rebuilt, and later visited by Qing emperors on pilgrimage to Mukden (Shenyang).

In 1900, when the Eight-Nation Alliance invaded China to defeat the Boxer Rebellion, the Laolongtou Great Wall fortifications were destroyed.

In 1985 the restoration of Laolongtou's Great Wall section began. After 8 years the past grandeur of Laolongtou was restored.

Laolongtou, along with the Jiaoshan mountain-top fort and the town fort (known as "First Pass Under Heaven"), defended Shanhai Pass Town.

When the Qing Dynasty Manchurians united the regions north and south of Shanhaiguan, the Great Wall at Laolongtou lost its function of military defense, and became a beautiful scenic spot for emperors, ministers, and men of letters to visit.

'Laolongtou Great Wall' is one of the "top 40 tourist areas in China" and listed as a National 5A Tourist Attraction. At Laolongtou, visitors may be faced with roaring waves or foggy sea sights.

After ascending Chenghai Tower, visitors can have a panoramic view of the Laolongtou fortifications. Entering Sea Stone Wall is actually about 10 meters (33') in height and 22 meters (72') long, but over half of its body lies below sea level at high tide. The original wall collapsed, but granite rocks of the original can still be seen at low tide.

'Entering Sea Stone Wall' was built using giant strip-shaped granite blocks averaging 2 to 3 tonnes. The foundation of stone city in the sea was made using many iron piles and then filled with rocks. Later, Nanhaikou Tower and Chenghai Tower were added to Ninghai Fortress, making Laolongtou a strong fortress capping off the Shanhai Pass defences.

Jinglu Beacon Tower is the first enemy warning post on the east of the Ming Dynasty Great Wall (not counting the loop round the Bo Sea to North Korea).

Jinglu Beacon Tower was made of stone blocks, 15 meters (50') high and 10 meters (33') square, with two doors, one north (landwards) and one south (seawards). The battlements on all sides are 1.72 meters in height.

Nanhaikou Pass Tower (南海口关 Nánhǎikǒu Guān /nan-hi-koh gwan/ 'South Estuary Pass') was built by Sun Chengzong, a grand secretary and government commander-in-chief in charge of the Ji and Liao regions, in the second year of Tianqi (1621). Sun established Longwu Battalion there, where he trained naval forces.

In the 22nd year of the reign of Daoguang (1840), in the Qing Dynasty, a canon mounting was built on top.

Chenghai Tower is at the zenith of the Laolongtou seaside fortifications, and it is an optimal place to appreciate the sea view. Kangxi and Qianlong, emperors of the Qing Dynasty, ascended the tower many times when they went back to Mukden (Shenyang) to worship their ancestors. The magnificent views of the sea inspired them to write poems.

The plaque "Chenghai Tower" hanging on the front of Chenghai Tower was a work of Emperor Qianlong. The whole tower is made of wood. The tower's east and west walls are inset with stone tablets of poems written by emperors and literati in the Qing Dynasty.

Ninghai Fortress (宁海城) was built in the early Ming Dynasty, before the other Laolongtou fortifcations. The fort wall was about 900 meters in circumference, 5 meters high, and 4.5 meters thick. On the west and north gates, there were corniced watchtowers with five ridges.

In the 12th year of the reign of Wanli (1584), Chief Executor Wang Bangjun restored the temple. The temple was destroyed during the invasion of the Eight-Nation Alliance in 1900.

In 1988 the restoration of the temple began, echoing Laolongtou around 350 meters (400 yards) northeast, it also stretches across the beach and into the sea.

Sea God Temple is made up a memorial archway, a three-hole stone bridge, a drum tower and bell tower, the Sea God Palace, the Queen of Heaven (Tianhou) Palace, and Sea-Viewing Pavilion at its seaward end.

Being by the sea in North China, Laolongtou is not too hot in the summer, its most popular season, but winters are cold with snow possible.

The Great Wall at Laolongtou is well-restored, and therefore walking conditions pose no risks.

How to Get to Laolongtou

From Qinhuangdao Shanhaiguan Airport to Laolongtou is about 10 kilometers (15 minutes and about 25 yuan by taxi).

China Highlights' private transfer service is the most convenient way for you to get to Laolongtou. We use high-quality air-conditioned private transport with an experienced driver and an English-speaking tour guide to take the hassle out of getting to the wall. See the tour options below.

Laolongtou is about 5 km south from Shanhaiguan Town. In the vicinity there are hotels with various star levels and restaurants of all kinds, which provide convenience for visitors to this popular seaside area.

Dress for walking and dress for the weather. Choose comfortable footwear with good grip and support for the feet. Wear/bring sun protection in the summer and dress for sub-zero temperatures in the winter.

If you want to visit Laolongtou to see the majestic appearance of its Great Wall fortress, China Highlights can help you. Contact us with your interests and requirements, including anywhere else you'd like to visit, and we will tailor-make your China tour. Shanhaiguan is the "First Pass Under Heaven." In this world famous Great Wall town, about 5 km (3 mi) north of Laolongtou, its Great Wall fortress architecture has magnificent beauty and grand stateliness.

Jiumenkou was probably the second most vulnerable pass, just 10 km north of Shanhai Pass. There you can see a restored Great Wall section than crosses a river. There is original Great Wall on one side of the river.

Beidaihe is North China's favorite seaside resort (one China's 44 key tourist areas). It is about 35 km (22 mi) west of Laolongtou.

Yansai Lake: Yansai Lake is a scenic reservoir area in the gorge below Jiaoshan ('Horn Mountain'), north of Shanhaiguan.