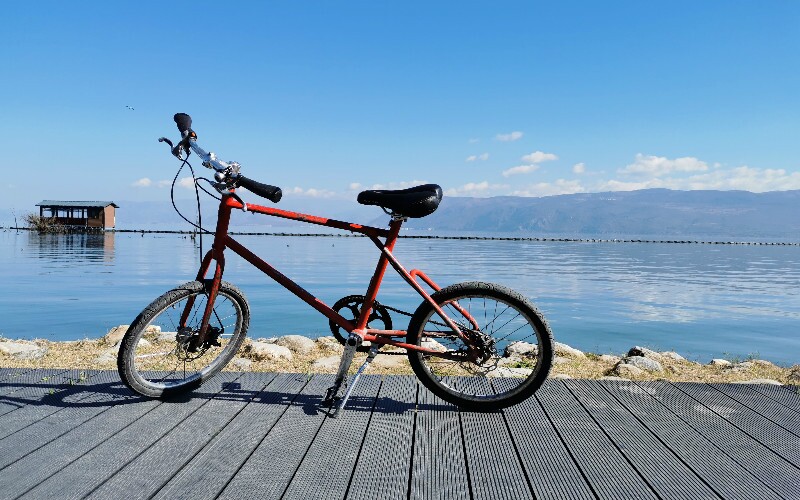 Traveling around Lake Erhai by bike might be fun if you go slowly, the conditions are right, major construction doesn't block you way, and it doesn't rain. It is easier to ride from modern Dali (下关; Xiàguān) and go east, and the eastern side is said to be easier and more scenic than the western side. The routes north of Dali along the western side are hard. There are two parallel roads. One isn't safe because of the traffic, and the older one isn't in good condition, but you can take it if you go slowly. The western side has most of the population. The modern city of Dali (下关; Xiàguān) and Dali Old Town (古城; Gǔchéng) are respectively southwest and west of the lake. The three old pagodas that are about 1,000 years old are in the Ancient City area. About 20 kilometers north of the pagodas is the old Bai merchant's town of Xizhou that was once a town of intellectuals during WWII. The road is better on that side, and you can try to follow the routes close to the lake. Since the conditions change a lot from season to season, it might be best to plan your bike trips by talking to the guides and bike rental shops staff in the Ancient City of Dali. Biking around it is difficult. Here are two suggested routes for the western side and the eastern side of Erhai Lake, or you may want to try to ride around it.

First of all, you can rent a bike. Bicycles can be rented at many guesthouses and rental places around town. They cost between 20 to 40 RMB per day or about 3 to 6 USD per day. Bikes vary greatly in quality, so shop around for the best deal. The Chinese brands Merida (美丽达) and Giant are among the better kinds of bikes. The old town has three ancient pagodas. You can see the symmetrically aligned mountain peaks to the west. Lake Erhai is a few kilometers to the east. Some people try going up to Cangshan Mountain on their bikes. You can ride around in the criss-crossing streets. You can also ride a few kilometers north to the pagodas.

The other big Bai town of Xizhou is about 20 kilometers or 12 miles north of the Ancient City of Dali. You can see a lot of old houses, and the area is preserved from development. Xizhou has about 200 nationally protected private houses that date from the Qing Dynasty. The houses are among the best examples of traditional Qing architecture in China, and some of them are exquisitely decorated. By biking around this small town, you can gain a better understanding of the history of the ingenious Bai people and gain an appreciation of a culture that has been important in Chinese history.

Riding Routes of the Western Bank

The eastern shore is said to be easier to ride along. The main attractions are seeing the lake itself and taking boat rides. A favorite stop for tourist boats is Nanzhao Love Island. Nanzhao Love Island is a tiny island in large Erhai Lake near the village of Shuanglang (双廊). It is one of several islands and islets that dot the lake. It is also called Nanzhao Folk Island. Its Chinese name is Nanzhao Fenqing Dao. It was turned into a Nanzhao theme park and resort complex in 1999. Before that, it was called Yuji Island. In the theme park, you can enjoy the sights of the lake and the surrounding region from the heights on the  hill. There is also a small beach with white sand. The island is in the northeastern part of Lake Erhai. Along with the natural trees and the lake for scenery, there are specially built attractions and a small amusement park. Nanzhao Folk Island is tiny, but it is big enough to have a big hotel sitting on the crest of the hill, a dock, some villas, and a garden with trees. If you want to get away and relax in a villa or the hotel during your bike trip, it may be a place for you to stop and rest.

You can also catch boats for riding out on the lake at Erhai Dock. A lot of tourists really enjoy a boat trip. The whole journey along the eastern bank is 70 kilometers (43.5 miles). Go slowly and be careful.

Riding Routes of the Eastern Bank

The journey around Lake Erhai is about 128 kilometers or about 79.5 miles in total. People say doing the whole trip is tough in some parts due to bad road conditions. But if you have time, you can pick you way among the surrounding roads and paths and find your own way. You can choose different routes according your physical condition and time.

China Highlights can help you customize a biking tour around Dali, or just see our Dali tours.

If you tire of biking or the weather turns bad, you can catch buses back to Dali. They may put your bike on the bus or on top of your bus. Go prepared for rain since the weather is changeable. Take water and food too, especially if you go to the northern and northwestern sides of the lake where people are not as used to foreign tourists.