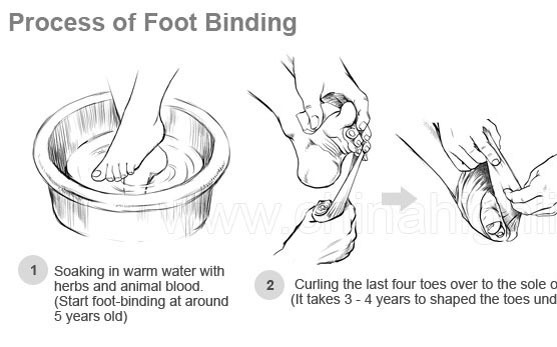 Foot binding was a Chinese custom of curling up young girls' feet to modify their shape. It was prevalent in imperial China.

1. What was foot binding?

Foot binding was the practice of tightly bandaging girls’ feet in cloth to alter their shape. Their bound feet were contorted to only a few inches in length and were called lotus feet. The smaller the better was the thinking.

Foot binding in China was similar to corsetry in Western countries. It was a practice for women to cater to the deformed aesthetic of the time, and it seriously affected women's health.

2. How did foot binding start?

It is said that the first recorded foot binding started from the Five Dynasties and Ten States Period in the 10th century, and it became prevalent in the Song Dynasty era (960–1279).

According to an account, an emperor's favorite concubine danced on a gilded lotus flower with bound feet, which gained the emperor's favor. Then other concubines imitated her, making the practice popular, spreading from the royal court to the whole country. It was thought to be a sign of beauty.

Foot binding began among the Han people. Generally, it was practiced among rich girls. That was mainly because the rich had servants to serve them, since they could hardly walk with bound feet.

3. What was the purpose of foot binding?

Women bound their feet in pursuit of so-called beauty and a good marriage. In ancient China, people took slightness as a symbol of beauty, as well as a ‘cherry mouth’, oval face, and slender waist. Thus, bound feet were considered to be attractive in ancient times due to their small size.

With bound feet, a woman's beauty was enhanced and her movement was daintier, which gained the support of both men and women for the practice.

Foot binding also showed a girl's status. Women who had bound feet had a higher status than average women, and they were more likely to marry a man of prestige.

Many girls born in poor families also bound their feet in order to find husbands and live a better life.

The advocation of foot binding was also an expression of the restrictions on women in feudal society. It restricted women from going out, leaving them at home to serve the family. Thus, the status of men was enhanced.

Yes, the foot-binding process was very painful. Girls had to have their feet bound between the ages of 4 and 9 until their foot bones were set in their adulthood positions and the bandage could be unfastened. Some women’s feet would be wrapped tightly for a lifetime.

The process of foot binding mainly involved twisting the joints and the arches of the feet to the maximum extent. Sprains and dislocations were almost inevitable.

Infection was the most common problem with foot binding. As health care was poorly developed in imperial times, toes were easily infected and prone to sepsis.

5. How was foot binding done?

Here is the general process of foot binding:

6. Could women walk after foot binding?

Walking was possible after foot binding, but a long-distance walk was impracticable. As the functional structure of the feet was destroyed and altered, walking became very difficult and required support.

There was a certain type of shoes called 'arch shoes' (弓鞋 gōngxié /gong-sshyeah/) for women with bound feet. A pair of well-made ‘arch shoes’ had various embroideries both inside and outside the shoes. Rich women even added some accessories, such as bright pearls in the heels.

7. When did foot binding end and why?

In 1912, following the end of the Qing Dynasty and the imperial era, Sun Yat-sen outlawed foot binding, and it was not until then that foot binding, which had lasted for over 1,000 years, began to die out.

In the 19th century, many reform-minded Chinese intellectuals began to consider foot binding as a backwardness of China and advocated abolishing the practice. However, any movement to oppose it had failed.

In the Qing Dynasty era (1644–1912), the Manchu rulers strongly opposed the foot-binding of the Han people but it was difficult to stop the trend. Foot binding reached its peak in the Qing Dynasty.

However, when the Qing rulers found that foot binding was beneficial to their governance, they gave it free rein.

Attitudes changed after foot binding was outlawed in 1912, but some people still bound their feet secretly, mostly in poor villages in Shandong and Yunnan provinces.

After the founding of the People's Republic of China in 1949, foot binding was completely abolished, and today’s women don’t bind their feet.