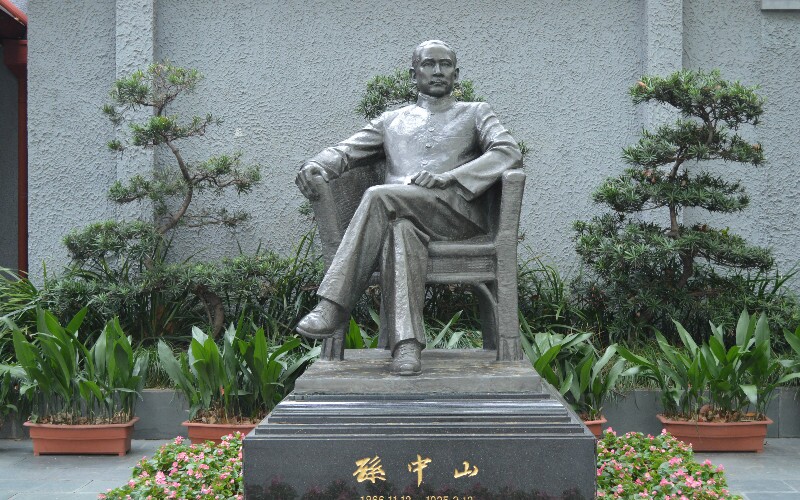 Chinese people generally revere Sun Yat-sen as the main leader who ended the Qing dynastic government. His goals put his life in danger, and he lived in exile for many years. By the time he died at age 53, he helped to shape both the culture and government of modern China.

He was born near Guangzhou in Guangdong Province in 1866. His original name was Sun Wen (孫文). Over the years he received a number of names. The name Sun Yat-sen (孫逸仙) is his Hong Kong Cantonese name.

His family were farmers, and as a kid, he helped with farm chores. An opportunity for social advancement came when he was sent to Hawaii at the age of 13.

He studied English, science, mathematics, and other topics at an Anglican missionary school called Iolani School. He did so well that the Hawaiian prince gave him a scholastic prize.

After finishing that school, he enrolled in Oahu College in Hawaii. He left Hawaii without graduating from the college, and returned to Guangzhou when he was 17.

During his time in Hawaii, his political ideals and world-view changed much. He grew to hate what he thought of as superstition and the anti-scientific attitudes of the Chinese rulers. He thought that the Qing Dynasty was tyrannical and took too much in taxes.

Back in his village, he wanted to be baptised, but his family and the village clan opposed this. Then, he attacked and damaged an idol in a temple, and he had to flee to Hong Kong.

He was baptised by a reverand, and became a Christian there in 1883 when he was 17. His baptismal name was Rixin (日新). People think that his Cantonese name derived from this name.

Then he enrolled in a Christian academy in Hong Kong in 1884 where he studied English. Then he studied medicine in Hong Kong and was certified as one of the first two medical doctors to graduate from his medical school in Hong Kong.

Though he was a doctor, political, social and religious change was the main goal of his life. Some of this work was accomplished on Hong Kong where he studied and lived during his twenties. From 1888 to 1894, he and his intellectual friends in Hong Kong started to lead government reform activities.

He set up a medical clinic in Macau. In 1894, he attempted to change the government by visiting a Qing official and writing a long petition. When this attempt failed, he started organizing a reform movement.

He helped organize an anti-Qing revolt in Guangdong in 1895. They failed, and he was known as a nemesis by the Qing government. He had to flee and go into exile.

He started traveling around the world to organize people and collect funding. He first lived in Japan where he received much sympathy and support from both Japanese and Chinese living in Japan.

In Japan, his supporters called him Nakayama, from which comes his Mandarin name Sun Zhongshan (孙中山).

In 1896, he was held captive by Qing agents in London in a highly publicized incident. When he was rescued, he was a British hero and started to receive much public and governmental support.

Political Success in the Later Years

By 1911, removing the Qing court became a popular goal. After a successful uprising in Wuhan, he was named the Provisional President of the Republic of China (29 December 1911 – 10 March 1912).

However, various territorial leaders opposed the new government, and he faced political opposition from within his government as well. Numerous battles and small wars were fought, and the Japanese army encroached from the north and east.

He never realized his goals, but his writings and philosophy inspired the population and later leaders. His philosophy was called the Three Principles of the People.

He died on March 12, 1925 in Beijing. Just before his death, he said: "I wish that after my death I could be buried at the foot of the Purple Mountain in Nanjing". His body was buried there in 1929 in a large and stately mausoleum.

You can learn more about his life and legacy by visiting memorials and museums set up in Nanjing, Guangzhou, Hong Kong and other cities in China. You can also trace the Sun Yat-sen Historical Trail in Central District in Hong Kong.