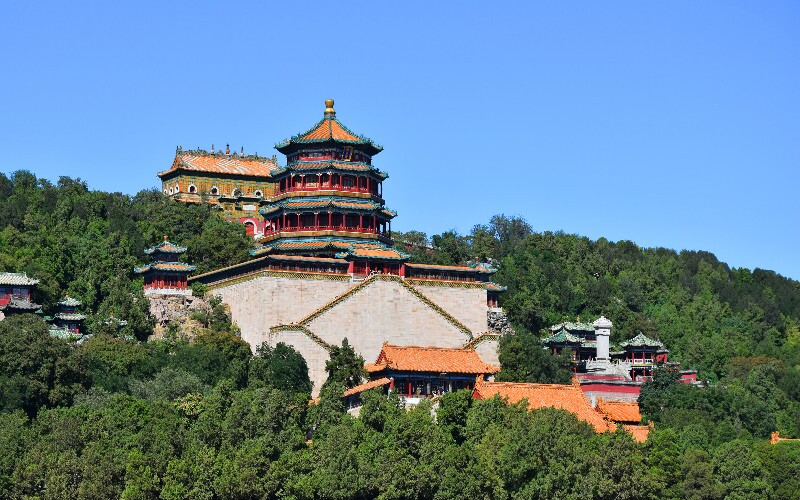 Cixi stands out as infamous in Qing Dynasty history (ruling 1861–1908). Past the smoke and screens, she lived as a powerful ruler behind two of the last emperors, and had a hand in imperial court policy in the last several decades of the Qing Dynasty.

Opinion on This Mysterious Ruler is Divided

People say that she ruled behind the screens somehow, and people around her died mysteriously. A lot of mystery surrounds her life. What is true or false about the myths and legends about her is perhaps impossible to determine.

Her life was hidden behind the screens, and she never really came out. Many people in the early 20th century after she was dead painted her as a monster responsible for the fall of the empire.

But some modern historians portray her as maybe ruling better than others in the royal court, and as a woman caught between rival factions.

When she was 16, she was sent to be a concubine. This means that she had sex with the emperor at his request. She was one of dozens or hundreds of concubines for Emperor Xianfeng early in the 19th century.

This was considered an honor for girls at that time. It meant she would live in the royal courts and have sex with the emperor along with maybe hundreds of other women. It also meant that her life was in Emperor Xianfeng's hands, and she might die at any time if he was displeased.

The Summer Palace, in which Dowager Cixi spent her whole life.

She quickly became one of the favorites of the Emperor. He had an Empress, his official "wife," but Cixi had a son by him.

In 1860, British and French troops attacked Beijing with a comparatively small force. Emperor Xianfeng fled with Cixi, and the army destroyed the Imperial Summer Palace.

It is said that when the Emperor Xianfeng heard of this, he fell into a depression, turned heavily to alcohol and drugs, and became seriously ill.

When he was dying in 1861, he named eight regents for his five year old son who was to be the emperor when he died. He also wanted Cixi (his son's mother) and his Empress to help his son. Being the boy emperor's mother gave her some real power in the court. She was about 26 years old then.

Cixi was an honorific name meaning 'Kind Joy' given to her when Emperor Xianfeng died and she became the regent with her young son as emperor. It is said that at birth, she was called Yu Lan or 'Little Orchid', however her true name remains unconfirmed.

She had come to power in a world where poisonings and assassinations were common. It was either kill or be killed. Somehow, for some reason, the Empress made Cixi a co-Empress. So she gained even more power. What followed after this were various plots and assassinations. Somehow, she ruled the empire from behind the screens during the reigns of two emperors.

An Era of Crises

When she started to reign in 1861, there was a major military crisis. The Taiping Rebellion seemed to be successful in holding a lot of important territory. They had an army of between one million to three million people at their height and some alliances with other rebel leaders.

After that, the empire went through one crisis after another. There were civil wars and foreign attacks, and the Qing Empire fell further behind the industrialized world. But it is said that she didn't much appreciate the need for modernization of industry.

In the late 1800s, there were a lot of economic troubles due to modernization and imports. A lot of people lost their traditional work because railroads replaced other means of transportation such as the ancient canal system. Modernized factories in the empire replaced some laborers, and many kinds of foreign imports such as imported clothes put local craftsmen and traditional factories out of business. So the poor died and faced starvation, and the population became poorer overall.

There were also several natural disasters in the late 1800s. The Yellow River flooded in 1898. Then, in 1900, there was a serious drought in most of North China.

The Manchu rulers were the hereditary rulers. The highest power in the royal court was under their control. The Manchu faction's general aim was to expel all the foreigners. Another faction of leaders thought there was a need for modernization.

Education in the Empire

Cixi gave non-Manchu people control of the southern part of the empire. One good policy decision was that she moved to support some small programs for industrialization and education. Young people were sent to other countries to study, and an academy for foreign learning that was staffed with foreigners was set up in Beijing.

But compared to the need, these reforms were small. It is said that when Western-educated people tried to make reforms or criticized the court, she grew defensive and viewed the educated people as a threat to her power.

She probably didn't understand how to set up a modern school system. At the end of the empire, most of the modern education in the empire was provided by missionaries.

Her nephew became the Guangxu Emperor in 1875. In 1894, the Qing navy was destroyed by the Japanese navy in the Sino-Japanese War. This was shocking because the Japanese showed the superiority of their armaments and tactics, but they were traditionally thought to be a backward people.

Reformers wanted to follow the example of the Japanese for economic and political change. The Guangxu Emperor announced many policy reforms in 1898, but a ruling faction opposed the changes. Cixi then had the Emperor put under arrest and imprisoned on a tiny island linked to the Forbidden City in Beijing. He wasn't killed, but his power was ended. Cixi ruled in his place until they both died in 1908.

The disasters and economic troubles increased the discontent of the people. Unemployed and poor people blamed their problems on the Qing Dynasty, foreigners and Christians. In 1900, the Boxer Rebellion started among the poor and unemployed. It was led by people who studied martial arts.

After this, the Empress Dowager made a remarkable reversal of policy. She started to invite foreigners to visit her in the Forbidden City, and she sent high officials to tour Japan and Europe to learn how to implement reform. She promoted a reformer named Yuan Shikai who became president after she died. In 1905, she abolished the Imperial Examination that was an important for selecting Confucian scholars to be officials in the Empire.

She died in 1908 one day after the Guangxu Emperor died, on November 15, 1908. Recently, tests on his remains showed that he had consumed a large amount of arsenic. People suspect that Cixi poisoned him, but no one knows for sure. On the day he died, a two year old boy named Puyi was named the new emperor. She died the next day. Some people suspect she was poisoned as well.

After she died, a man named Blackhouse who lived in Beijing wrote books about her life. His books and much false information that he gave to a newspaper correspondent colored the public's perception of Cixi for decades. Historians now believe that much of what he said about her was false.

Learn More About Cixi and Imperial Life in China