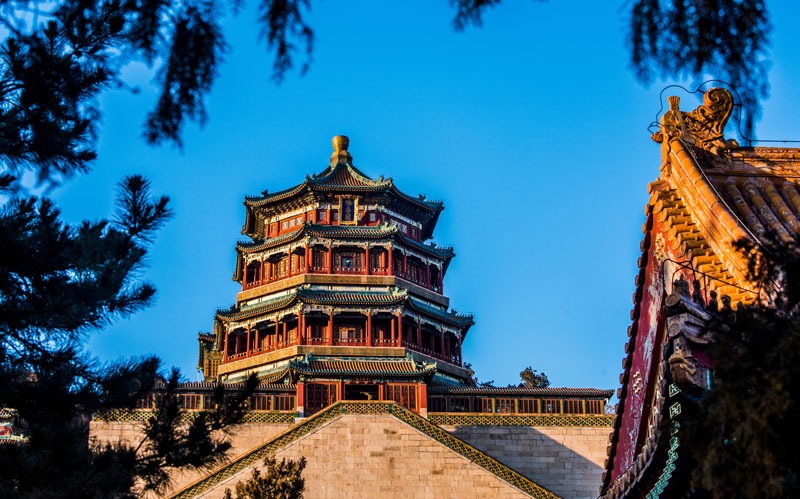 The Summer Palace (Yiheyuan), in northwest Beijing, is said to be the best-preserved imperial garden in the world, and the largest of its kind still in existence in China. It is only a short drive of 15 km (10 miles) from central Beijing, but it seems like another world.

Most people find they need to spend at least half a day there, as there's so much to see and enjoy.

Close to the Summer Palace, 3 kilometers (2 miles) southwest of it, there is another imperial garden called the Old Summer Palace. They are two different gardens.

Why Is the Summer Palace Famous?

The Summer Palace is known as the 'Imperial Garden Museum' in China as its purpose now is the preservation of national heritage material. It harmonizes plants and paths, water and land, architecture and horticulture, epitomizing the philosophy and practice of Chinese garden design.

The Summer Palace played a key role in the development of this Oriental cultural form, and perhaps represents its pinnacle.

A Summer Retreat for the Royal Family

The Summer Palace was used as a summer retreat by the Chinese royal family. During the hot Beijing summers, the imperial family preferred the beautiful gardens and airy pavilions of the Summer Palace to the walled-in Forbidden City. Dowager Empress Cixi took up permanent residence there for a time, giving rise to some wonderful tales of extravagance and excess.

The Summer Palace at Sunset

In the late Qing Dynasty, due to the weakening of national power, the garden was gradually abandoned.  In 1860, it was destroyed by British and French allied forces.

The Empress Dowager Cixi rebuilt the garden as her summer resort and changed its name to the Summer Palace (Yiheyuan), its present name.

In order to rebuild the Summer Palace, military expenditure was diverted, which contributed to the Qing government's defeat in the First Sino-Japanese War in 1895.

In 1900, it was destroyed by the Allied Forces of the Eight Powers during the defeat of the Boxer Rebellion, but it was rebuilt again in 1902.

In 1924, the Beijing municipal government took charge of administrating the Summer Palace and turned it into a public park.

Longevity Hill is in the north of the Summer Palace, accounting for about a quarter of the whole garden.

Most palaces and gardens were built along the north–south axis of Longevity Hill.

These palaces fall into several sections, each with its own distinct character, some meant for administration, some living, and others relaxation.

Kunming Lake takes up three quarters of the whole garden and is dotted with several small islands. These small islands also host some halls and pavilions.

Palaces, halls, pavilions, the long corridor, and the marble boat are the main things to see in the Summer Palace gardens.

It is the main building of the Summer Palace complex, built halfway up the front of Longevity Hill. Empress Dowager Cixi went there every month to worship Buddha.

This was the Summer Palace's main place for Empress Dowager Cixi to receive guests, host grand ceremonies, and celebrate her birthday. Like the Tower of Buddhist Incense, it is located on the central axis of the 'front hill' area.

Hall of Benevolence and Longevity (Renshoudian)

This was the main place for administering government affairs, receive greetings, and receive foreign envoys.

The paths beside the lake lead you under shady trees, or along the roofed colonnade known as the Long Corridor, with its magnificently painted ceilings. Bridges, boats, willows, lotus flowers, and other attractive landscaping make this a pleasant place to soak up the atmosphere and lovely views.

Facing Kunming Lake, it's 728 meters (2,388 feet) long. In 1992, it was recognized as the longest corridor in the world and listed in "The Book of Guinness World Records".

The Garden of Virtue and Harmony (Deheyuan)

The Garden of Virtue and Harmony

It is located on the peak of Longevity Hill. The outer layer of the building is decorated with exquisite yellow and green glazed tiles.

This hall was the living quarters of Emperor Guangxu (1871–1908). When Empress Dowager Cixi gained real power, Guangxu was confined there.

Hall of Joy and Longevity (Leshoutang)

This hall was the living quarters of Empress Dowager Cixi. Facing Kunming Lake, and leaning against Longevity Hill, reaching out to the Hall of Benevolence and Longevity in the east and the Long Corridor in the west, it is the best place for living and relaxation in the Summer Palace complex.

Suzhou Market Street recreates a selection of traditional riverside shops (as would have been found in Suzhou), many of which can only be reached by boat. The story goes that former Emperors, or their concubines, used to enjoy 'pretend-shopping', as normally everything was bought for them.

The Marble Boat, at the northern edge of the lake, is a decorative building that imitates a real boat. Erected in 1755, it is the only Western-style structure in the park, inlaid with colorful glass windows and wheels, and paved with colored bricks.

Kunming Lake, in the center of the park, takes up about 75% of the park. Boating on Kunming Lake is highly recommended. It takes about 10 minutes and gives a tranquil and relaxing break away from the crowds of tourists confined to the pathways. The boating fee is not included in the entrance fee.

The famous 17-hole bridge spans between Nanhu ('South Lake') Island and the east bank. The bridge is 150 meters (490 ft) long, and is curved like a long rainbow frame above the blue water.

Tips for Visiting the Summer Palace

Boating on the lake in the Summer Palace

Is the Summer Palace in the Forbidden City?

Why was the Summer Palace built?

The Summer Palace was originally built for Emperor Qianlong's mother to celebrate her 60th birthday. Later the Empress Dowager Cixi rebuilt it as her residence to live a peaceful life in her old age.

How big is the Summer Palace?

The Summer Palace takes up an area of 300 hectares (just over 1 square mile), four times the size of the Forbidden City. It's about the size of Central Park in New York or twice the size of Hyde Park in London.

Why was the Summer Palace destroyed?

Basically, as a show of strength (and greed) by European occupiers. The Summer Palace suffered two demolitions. Both were characteristic of wanton destruction and plundering during periods of conflict with European forces when China was at its weakest.

The first was a burning during the Anglo-French invasion in 1860 (the end of the Second Opium War. The second was during its occupation by the Eight-Nation Alliance of European nations in 1900. Although no buildings were burned this time, many artifacts were looted.

Why was it called Yiheyuan ('Nourishing Peace Garden')?

The Summer Palace's landscaped gardens, temples, and pavilions were designed to achieve harmony with nature, to soothe, and to please the eye. So, the Chinese name 'Nourishing Peace Garden' is apt.

Why is it called the Summer Palace?

'Nourishing Peace Garden' came to be known as the Summer Palace as it was where the emperors and the imperial family were based during the summer months from the late 18th century, and the many of the buildings in the garden are known as palaces.

Touring the Summer Palace with Us

The Summer Palace is a classic Chinese garden, rich in history and culture. English signage and introductions in the garden are limited, however. Traveling with a professional English-speaking guide is advisable. We are proud to offer our excellent guide service, and we are ready to tailor-make a tour especially for you.

Here is one of our most popular tour plans including the Summer Palace and we list other possible tour starting points: