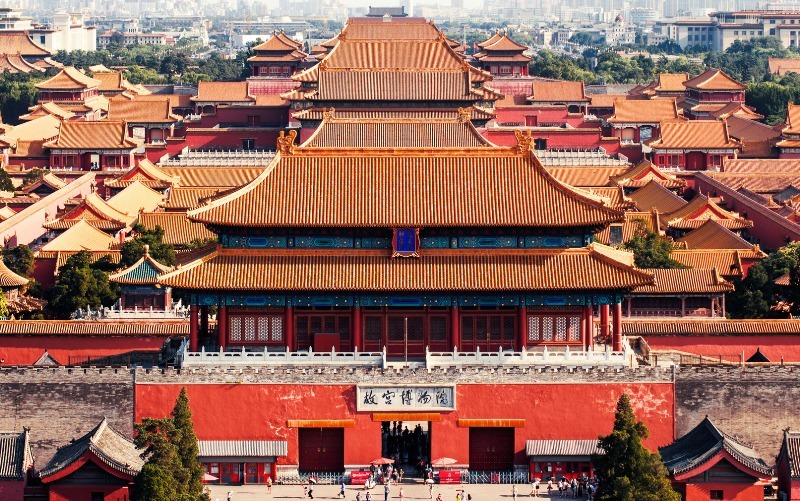 Fengshui is the core idea and soul of traditional Chinese architecture theories. It is also thought to be behind the rise and decline of a city, and to affect the health, wealth, and power of the court. It's a Chinese philosophical system of harmonizing with the surrounding environment.

What Gives a City Good Fengshui?

For a city, essentially good fengshui means shielding mountains, and an outlook over (navigable) water and fertile plains. These were basically the same ingredients for good military security, prosperity, and agricultural abundance. So, whether Fengshui is to be believed or not, it's no wonder these places did well.

The Forbidden City in Beijing.

Beijing has always been considered to be an ideal selection for the nation's capital according to Fengshui theory. It is at the northwest corner of the North China Plain, surrounded by mountains in the west and north, and facing the Bohai Sea to the southeast.

Beijing still retains the concentric layout and north-south axis of ancient imperial times, centered on the Forbidden City. It once had large areas of plain and low-built common residences, which made Beijing's fengshui even better. Learn more about Beijing.

Tekes' central road layout looks like a bagua diagram, with a central tower and roads radiating out in eight directions. Concentric octagons of roads divide the town into bagua-like sectors. Such diagrams are used for divining the fengshui of a place.

Tekes is one of China's best places to live. Its convenient road web avoids traffic jams with no traffic lights!

Tekes is the largest eight trigram town in the world, and an important historical landmark in the study of Fengshui. Its location is bounded by steep mountains to the north, a river to the south flows west to east, followed by fertile fields and more mountains to the south, and its valley looks out east to a valley-wide dammed lake — excellent fengshui.

If you're thinking of going to see Tekes, it's best to go via Urumqi.

The scenery of Kunming.

Kunming is situated on the northern shore of the Lake Dian and surrounded by mountains to the north, west, and east. That bodes well for fengshui.

Kunming's subtropical highland climate zone gives it pleasant weather throughout the year. It is never too cold in winter nor too hot in summer, and flowers bloom all year round, thus Kunming is known as "Spring City". Kunming is the ideal place for traveling and living. Learn more about Kunming.

The Terracotta Warriors and Horses in Xi'an.

China's longest serving ancient capital, Xi'an was the capital of 13 dynasties, and has very good fengshui.

Xi'an is located on the Guangzhong Plain, cradled by mountains in the east and south, with the Wei River to the north. It is the last large fertile valley on the western limit of the North China Plain, with timely wind and rain and pleasant climate, it is also known as the 'Kingdom of Heaven'. Learn more about Xi'an.

With a broken mountain range to the south and east, and the mighty Yangtze to the north and west, Nanjing is strategically situated in the southeast corner of the North China Plain. As a result it was easy to defend and difficult to attack from all sides.

Nanjing is blessed with high mountains, providing fresh water and a natural defensive barrier, deep navigable waters for shipping and defense, and vast fertile plains around for agriculture. Time and time again, its glory was restored from the rubble, though it suffered greatly from wars throughout its history.

The Nanjing area was considered a vital land by the ancient Han ethnic group, who have molded China's history. Learn more about Nanjing.

The Leshan Giant Buddha near Chengdu.

Serving as capital of the ancient State of the Shu (221–263) during the Three Kingdom Period, Chengdu is not in the least inferior to Beijing and Nanjing with respect to fengshui, though its extreme western location isolated it from much of China's turbulent history.

Its good fengshui comes from a shielding line of mountains to the southeast and the large Min River to the northwest, backed by the towering Tibetan ranges. It has a strategic location on the northwest fringe of the fertile Sichuan Basin.

Chengdu has enjoyed the reputation of being a "Heavenly Land of Plenty". It really deserves its name due to its producing numerous treasures, such as delicate Shu Brocades and Sichuan dishes (one of the top eight cuisines of China), numerous outstanding figures, and beautiful ladies. Learn more about Chengdu.

Luoyang, the ancient capital of nine dynasties, is another city with good fengshui in the North China Plain. Luoyang is located in a natural basin, surrounded by mountains on four sides, with the Yellow River to the north and the Luo River running through it. It is considered to be one of the cradles of Chinese civilization.

There is a Chinese saying: "Be born in Suzhou and Hangzhou, and buried in Mangshan." (Mangshan is an area nestling against the mountains north of Luoyang.) Luoyang (洛阳) and 'sunset' (落阳, symbolizing the emperor's death) sound the same and have almost the same characters.

Mangshan has the best fengshui of anywhere in the city; hence Mangshan is the first choice for grave sites for emperors, generals, and ministers of state. Twenty-four emperors were buried at Mangshan. Learn more about Luoyang.

The beautiful scenery of  West Lake in Hangzhou.

Hangzhou is at the southern end of the Grand Canal of China, which channels water to dry Beijing, and brought emperors south in search of warmth and relaxation. Hangzhou has the Tianmen Mountains to the west, the Hangjiahu Plain to the north and east, and the large Qiantang River to the south.

The Buddhist grottoes by 'Soul's Retreat' (Lingyin) Temple have even better fengshui, nestled in hills to the west, north, and south, and looking out east on tranquil West Lake.

An old Chinese proverb praising the beauty and prosperity of Hangzhou says,

"In heaven there is paradise, on earth there are Hangzhou and Suzhou."

Hangzhou not only has beautiful scenery, but with its tea-growing mountains it is a rare place in the flat Yangtze Delta area with good fengshui. That is why it was chosen as the capital of the Southern Song Dynasty (1127–1279). Learn more about Hangzhou.

With mountains cradling it, in the shape of the Big Dipper, lock-shaped Wenzhou was built by Guo Pu, the first man to write books on burial based on Fengshui theory. Due to lack of flat land, the Wenzhou conurbation has been forced to grow south on delta areas on the East China Sea coast.

Facing the Ou River to the north and the East China Sea to the east, and enclosed by mountains on all sides, Wenzhou City's shape is dictated by its topography. It has made full use of its excellent fengshui to avoid the flames of war, though it's relatively isolated compared with other cities.

If you want to see the merits of fengshui and visit these places for yourself, contact us and we can provide you help arranging a tour according to your requirements. We specialize in tailor-making China tours.