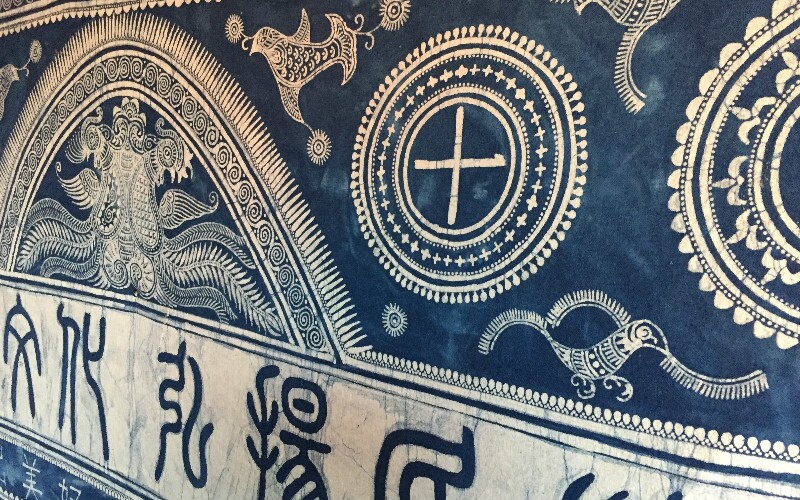 Wax printing, also known as batik, is one of the three ancient Chinese handicraft methods of producing dyed, multi-colored textiles via a process which prevents the dye from reaching certain (chosen) parts of the fabric (the other two dyeing methods, bandhnu and calico, are briefly outlined in the footnote below*). It is believed that wax printing existed in China as early as during the late Qin (BC 221-207) or early Han (BC 206 – CD 220) Dynasty, though widespread knowledge the existence of Chinese batik as a finished product first occurred during the Tang ( 618-907) Dynasty, when batik became yet another "Silk Road" commodity that was exported to Europe and elsewhere.

Wax printing, alternatively batik printing, is a mechanical dye-blocking method whereby hot (melted) wax is applied, often in the form of a geometric pattern or an artistic representation (anything from a flower to a human face), to a chosen part the fabric, then when the wax has dried sufficiently, the fabric is dyed in a cold-water vat of soluble dye. When the dyeing process is finished and the fabric has been allowed to dry completely, the fabric is then washed in hot water, which dissolves the wax, and the finished product is a piece of fabric with patterns, designs, images, etc., in a contrasting color to the dyed, or background, color.

People draw pictures on the white cloth to make patterns.

In general, though those who expound on the subject tend to present the case in a much more nuanced light than is justified, the methods of producing multi-colored textiles via one or more dyeing processes can be divided into two overarching categories: mechanical and chemical. All three of the ancient Chinese handicraft methods of producing dyed, multi-colored textiles fall into the former category.

The mechanical method of partial dyeing is essentially aimed at physically blocking, in some cases, only impeding or reducing, the dye's access to the targeted parts of the fabric, whereas the chemical (aka reactive) method is to use a chemical agent to temporarily render an insoluble dyeing agent soluble, so that it may be absorbed into the fibers of the targeted parts of the fabric, where, once dried (i.e., oxidized), the absorbed dye in this part of the fabric will return to its insoluble state, so that when one later dyes the entire piece of fabric in a vat containing a different colored dye, the insoluble dye prevents the second (soluble) dye from being absorbed into the fibers in those parts of the fabric where the insoluble dye has been absorbed.

Naturally, one can create multiple shades of these color patterns by dyeing more than once – using the same or a different (darker), color of dye – where more hot wax in the targeted area (not necessarily the same areas as in the first dyeing process) will preserve the existing color, while the rest of the fabric is impacted by the second (third, fourth, etc.) dyeing process.

Applying color via the wax printing method is, if not an art, at least a craft which requires a high degree of skill, not least because the hot wax must be applied in small amounts, quickly – otherwise the wax will cool and not be properly absorbed into the fibers of the fabric – and often deftly, otherwise the image's contours will lack sharpness. The nature of the design or image will dictate the type of "spatula" used: either broad or finely tapered.

The batik artist, in applying the hot wax that will prevent the dye from penetrating the fibers of the fabric in the targeted areas, thus produces a negative image (think of the image of a face), in the sense that the areas where the wax is applied represent reflective surfaces (think of the cheeks) while the areas where the wax is not applied represents shadowy surfaces (think of the recessed areas around the eyes). This requires not only a good grasp of how to draw an object (almost all batik was traditionally done in freehand, not with the help of design aids such as stencils or pre-drawn contours), but also of how to draw it "in reverse".

In China, it is believed that the art of wax printing was widespread, but this being a tradition that is passed on from generation to generation, it disappeared in many, if not most, communities in China as Chinese society evolved and batik was abandoned, for whatever reasons. Today there are only two communities, the Zhuang and the Miao ethnic groups, living in small enclaves in Guizhou, Guangxi, Sichuan and Yunnan Provinces, which have preserved the ancient tradition of batik, or wax printing. This comes as no surprise, as many oral traditions as well are preserved only in smaller ethnic communities. China Highlights' ethnic minority tours to Guizhou offer tourists a great chance to explore the ancient culture of the Miao and Dong ethnic people in Guizhou, including their centuries-old batik culture.

The Zhuang ethnic minority have a preference for dyed-blue fabric with white flower blossoms that seem to leap out of the cloth. The cloth is first bleached so as to render it pasty-white, allowed to dry thoroughly, then the hot wax is applied in the shape of a flower blossom. The rest is as described above. The basic batik method used by the Zhuang ethnic minority is also followed by the Miao, who similarly work with bleached white cloth, except that the Miao employ a wider variety of representational and non-representational images in their batik.

The Zhuang and the Miao not only make batik for their own use, but produce batik for sale. Tourists who visit these ethnic areas will find wax-print articles ranging from home decor items (curtains, cushions, tablecloths, wall hangings, etc.) to personal items such as handbags, dolls, and clothing.

* As indicated, all three of the ancient Chinese handicraft methods of producing dyed, multi-colored textiles belong to the mechanical as opposed to the chemical method. The bandhnu method achieves this by means of tying, twisting, knotting, pinching, etc. – and even stitching – the material together in the desired patterns, which are often flower-shaped, albeit, usually in a very non-exact manner (this is the method of batik that became popular in America during the "hippie" years, a method of batik which is also practiced throughout Africa, from whence – and contemporarily with the batik fad in the U.S. during the hippie years – also the Rastafari movement and the music of Bob Marley). The bound (tyed, knotted, etc.) parts of the fabric will hinder the dye in penetrating completely – or at all – depending on the tightness of the binding procedure. The Bai ethnic minority, located mainly within Yunnan Province, are avid practitioners of bandhnu.

The calico (or "spotted") method of textile printing is not unlike the art of woodblock printing, which, in China, is perhaps older than the art of wax printing, since it can be dated to the 3rd century BCE. Both achieve the end result by pressing the object (paper in the case of woodblock printing, fabric in the case of calico printing) between two surfaces, where the bottom surface has been carved away to hold the dye/ ink that will produce the desired image when the object is pressed between the two surfaces. One can of course achieve very exact – and very consistent – results by the calico method, since a pre-designed surface can be worked to perfection, as it were, and where nothing is left to the chance movement of the hand, as in the free-hand, wax printing method.