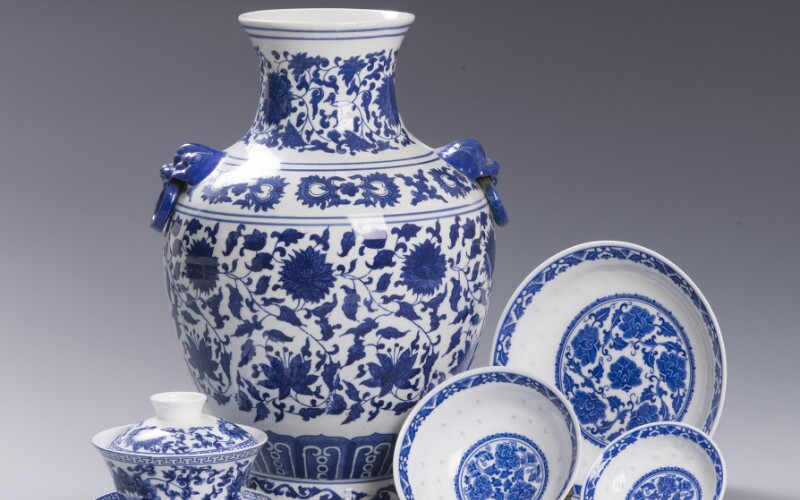 Blue and white porcelain, or Qinghua (/ching-hwaa/'blue flowers'), is the most widespread porcelain, and China's most famous china.

This underglaze ceramic, decorated with blue pigment, normally cobalt oxide, has been produced for over 1,000 years.

During the Ming era (1368–1644), blue and white porcelain became the mainstream porcelain, and then reached its peak during the reign of Emperor Kangxi (1661–1722) of the Qing Dynasty.

The Epitome of Blue and White Porcelain - Yuan Dynasty china The blue and white porcelain produced during the Yuan era was an excellent fusion of Chinese, Mongolian, Central Asian, and Persian civilizations.

The Yuan Dynasty was a special period for China and china. It was the first foreign-led dynasty in China. The fierce Mongolians not only captured an unprecedented territory, but also brought their ethnic culture, such as preference for the color white.

Islamic culture also had a far-reaching influence on the Mongolian empire, and blue was one of the favorite colors of Muslims, as it symbolizes "the treasure in the desert"- water.

Against this background, the Yuan Dynasty's porcelain industry shifted its focus to blue and white porcelain.

The Most Expensive Porcelain

In 12 July, 2005, an exceptionally rare and specially-themed blue and white Yuan era jar was sold for £15.7 million at Christie's in London. It became the most expensive Asian work of art.

Influences of blue and white porcelain For example, in the 2008 Beijing Olympic Games, a series of blue and white porcelain design uniforms were chosen for the medal ceremonies.

Influence on Other Countries With the coexistence of Chinese and Islamic styles from the 14th century, blue and white porcelain was popular in the Middle-East. This kind of ceramics was imitated and reproduced in the Ottoman Empire.

In Europe, thousands of miles from China, elegant, tough, and beautiful porcelain was considered a symbol of wealth. Porcelain was even used in palace decoration in Spain.

Discover More of Porcelain in China

The Palace Museum: It has lots of imperial porcelain housed within.

Shanghai Museum: The museum has over 120,000 precious historical relics, including Chinese ceramics.

Guanfu Museum in Beijing is one of the best private museums in China. The porcelain halls hold many precious antique Chinese porcelain works.