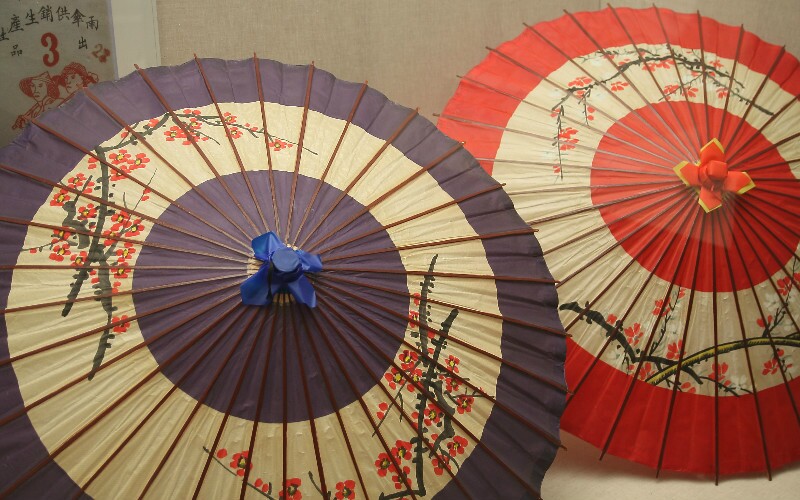 Apart from their most basic use as a shade, traditional paper umbrellas serve a multitude of purposes and are deeply ingrained in traditional Chinese culture. Originating in China, the paper umbrella has spread and developed across several Asian countries throughout the years, yet the colorfully decorated, almost gauze-like Chinese paper umbrella remains as quintessentially Chinese as chop sticks.

The Chinese Paper Umbrella in History

Although the collapsible Chinese paper umbrella is believed to have existed in China since before the beginning of the Christian era, the first historical reference to the Chinese paper umbrella stems from the 21 CE mention of a paper umbrella made for the 4-wheeled "chariot" of Emperor Wang Mang (a royal official who usurped the throne of the Han Dynasty for a short period – generally referred to as the Wang Mang interregnum – creating the short-lived Xin (CE 9-24) Dynasty).

According to the written references of a high-ranking military officer, Fu Qian, who served during the Three Kingdoms (CE 220-280) Period, Emperor Wang Mang's paper umbrella had articulated joints which allowed the umbrella to be extended and retracted, though the description does not lead one to assume that the umbrella was collapsible in the sense that we know it. However, we still have every reason to believe that the "technology" for a collapsible umbrella existed during the lifetime of Wang Mang. Evidence of this can be seen in a collapsible umbrella excavated from the burial site of Wang Mang's son, Wang Guang, in what is present-day Korea. Through the use of carbon dating, archaeological finds suggest the existence of special, articulated joints made of brass with a locking device that could be used in a host of applications, including in the construction of a collapsible umbrella, all the way back to the 6th century BCE.

Perhaps the most iconic display of the Chinese paper umbrella in ancient Chinese history can be found in Emperor Qin’s Tomb (Emperor Qin, the founder of the Qin Dynasty (BC 221-207) and the first Chinese ruler to declare himself an emperor). Better known as the site of the world-famous Terracotta Army, one can find elaborate bronze chariots equipped umbrellas that fit into tubes attached to their side. Even though this umbrella is not collapsible, nor can we be certain that the original was made of paper, silk, or some other material, we are still able to clearly witness the umbrella’s significance in Chinese history.

The Making of Chinese Paper Umbrellas

The quintessentially Chinese umbrella is made of one of two types of material: silk or paper. Silk umbrellas are the most expensive and regarded as the most exquisite, but also the most difficult to fashion and to maintain. Paper umbrellas are easier to fashion, they can be treated with oil to make them impermeable, or water resistant, and they lend themselves admirably to artistic decoration. Most paper umbrellas produced today are made impermeable with glutinous tung oil (aka Chinawood oil, from the euphorbiaceous tree, Aleurites fordii, found throughout central Asia). The main areas of production of impermeable Chinese paper umbrellas are Fujian and Hunan Provinces.

The construction process of the fixed umbrella involves 5 parts: the head, the handle, the ribs, the paper shade and the artistic embellishment (a collapsible umbrella naturally involves a 6th part: articulated joints). The production of each part requires great skill, since all 5 parts must assemble to a perfectly formed umbrella. Though each part of the 5-part umbrella is important, the three most demanding parts to produce are the ribs, the paper shade and its artistic embellishment.

The ribs must be made of a material that is both strong and pliable, with the most common material being bamboo. The bamboo to be used must be at least 5 years old - otherwise the resins in the bamboo, that permit strength combined with flexibility, will not have been developed. The alternative material used in the construction of umbrella ribs is the bark of the mulberry tree.

The paper shade itself is made of a special, tissue-thin fibrous paper that is very strong and tear-resistant. The thin paper is first impregnated in a bath of tung oil, rendering the paper highly translucent – almost transparent. Once impregnated with the glutinous tung oil and allowed to dry, the paper shade is finally ready to be decorated.

The decorations vary from solid colors to drawings of flowers, birds, blossoms, landscapes, etc., as well as calligraphic characters. Being one of the highlights of the Chinese paper umbrella, much work is invested in the artistic embellishment of the paper shade. Besides being water resistant, the paper shade also needs to be built withstand the ravages of wind and rain, just as its decorations will resist the tendency to fade over time.

Interested in learning more about the Chinese paper umbrella during your trip?

If you’re interested in finding out more about the origins and the making of the Chinese umbrella, why not join us on our 2-Day Hangzhou Highlights and Culture Experience where you even can try your hand at painting your very own paper umbrella?