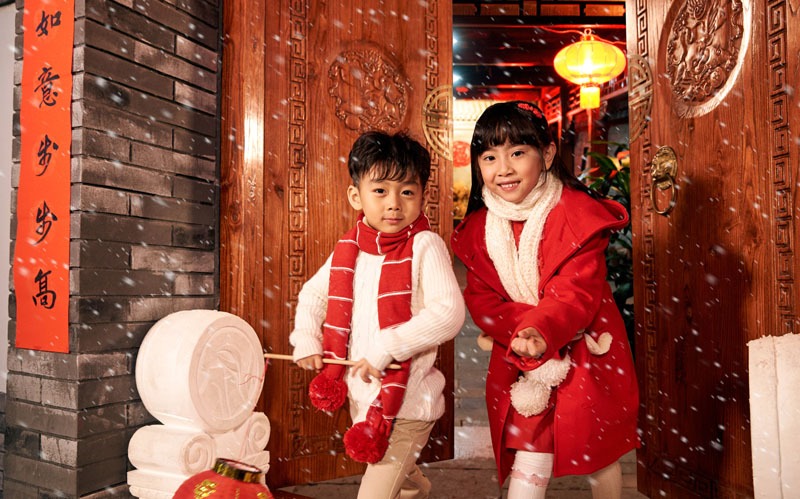 How Chinese New Year Is Celebrated in Northern and Southern China

Over China's vast territory, people in different areas have their own ways to celebrate Chinese New Year (Spring Festival), China's most important traditional festival. Especially between China's north and south, there are many differences in celebrating the festival. Here are the main six...

In northern China, people usually eat dumplings on Chinese New Year's Eve. Dumplings look (a bit) like the boat-shaped silver ingots of ancient China, and so symbolize (wishes for) wealth.

For luck, people put sugar in dumplings. That way, they believe life in the next year will be as sweet as sugar.

Some put a coin in one dumpling. It's said that the one who eats the dumpling with a coin in will get rich in the coming New Year.

'Soup balls' (tangyuan) are eaten in the south on New Year's Eve.

Southerners also eat hotpot and fish. When hotpot is boiling, the steam makes people feel warm and cozy. 'Fish' (yú) is a homophone of 'surplus', which southerners hope invokes a surplus of luck and wealth in the coming year, with the eating.

In northern China, melon seeds, walnuts and peanuts are the most common snacks during Chinese New Year. No matter whom you go to visit, these are the first things that you see when entering the house. It's usual to sit down to chat and eat melon seeds.

Click to see The Top 7 Snacks You Should Eat during Chinese New Year.

Family members get together and sit around the heater, chatting while watching the TV show, and waiting for the coming of midnight, when the old year is dismissed and the new year is welcomed in.

In the south far fewer people watch the Chinese New Year Gala. They eat and drink late into the night, sometimes stay up all night chatting with family members, and go to sleep when they please. Generally speaking, southerners are freer, and less bound by convention.

Apart from visiting and greeting friends and relatives at New Year, which happens all over China, there are many differences in activities between northern and southern China.

In Northeast China, on Chinese New Year's Eve, family members get together and wait for the coming of the new year by playing poker or mahjong.

In Beijing, many temple fairs are held from the first day of the New Year. People go there with family members or friends to see folk performances and taste various snacks.

In the south, there are lantern displays, for example in Shanghai's City God Temple.

In Guangzhou, flower fairs for Chinese New Year can be seen in bustling city lots and cultural spots. All kinds of wonderful flower fair activities are held. People go there to buy flowers or potted plants for relatives and friends to express their New Year best wishes.

Click to see How Chinese People Do to Celebrate Chinese New Year.

New Year decorating is a must in both northern and southern China. On Chinese New Year's Eve, people have a thorough "spring clean". Then they put up door gods, spring couplets, New Year paintings, and hang out lanterns.

In northern China, people put up paper cuttings with various beautiful patterns symbolizing the happiness of the coming year on windows.

In the south, people no longer put up paper cuttings for CNY. They do this only on weddings. Instead, they display a potted golden kumquat tree bearing fruit. The brilliant color of the kumquat jubilantly symbolizes good luck and prosperity. They also display flowers such as daffodils and butterfly orchids.

See more information about How to Decorate for Chinese New Year.

Both in northern and southern China, people have the custom of worshiping ancestors during Chinese New Year, through which they pray for blessings for their families. But they do this in different ways.

In the north, ancestor worship is simple compared with that in the south. They only worship ancestors in their own home. On the eve of Chinese New Year, family males put tributes on altars, burn incense, and 'paper money' and set off firecrackers.

On New Year's Day, northerners are busy with paying New Year calls and extending greetings to their local elders from the early morning.

In the south, ancestor worship is ceremonious. On New Year's Day, some families worship in memorial temples, where they place tributes to ancestors and set off firecrackers. The longer firecracker is the better, because it represents the family's posterity.

A minority of southerners climb to mountain graves to worship their ancestors on New Year's Day.

Travel with Us and Experience More Chinese New Year Customs

If you want to experience Chinese culture during the Chinese New Year period, China Highlights' tours offer you the opportunity to celebrate a traditional Chinese New Year with a local family. See our most recommended tours below: