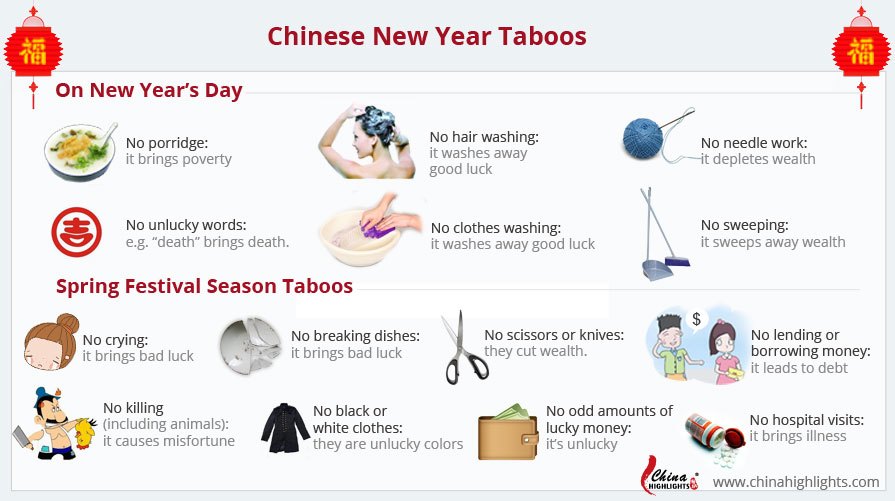 Chinese New Year Taboos and Superstitions: 18 Things You Should Not Do

Chinese people believe that, as the Spring Festival is the start of a new year, what you do then will affect your luck in the coming year. There are many Chinese New Year traditions about dos and don'ts.

Find out the top 18 things you should not do. Some are taboos on the first day of the Chinese New Year and some are superstitions for the whole New Year Festival season (from the 1st to 15th of the Lunar New Year).

It is taboo for a person to brew herbal medicine or take medicine on the first day of the lunar year, otherwise, it is believed he or she will get ill for a whole year.

In some places, after the bell announcing the New Year at midnight New Year's Day, sickly people break their gallipots (medicine pots) in the belief that this custom will drive the illness away in the coming year.

2. Don't sweep or take out garbage.

The act of sweeping on this day is associated with sweeping wealth away. Taking out garbage symbolizes dumping out the good luck or good fortune from the house.

Nobody wants to hear words with negative meanings during the Lunar New Year period. Avoid saying words related to death, sickness, poverty, ghosts, etc. People replace them with euphemisms if they need to talk about such topics, for example saying"somebody is gone" instead of "somebody died".

Porridge should not be eaten, because it is considered that only poor people have porridge for breakfast, and people don't want to start the year "poor" as this is a bad omen.

Besides, meat should not be eaten at this breakfast out of respect for the (Buddhist) gods (who are believed to be against killing of animals), as all gods are expected to be out meeting and wishing a happy New Year to each other.

Click to see What to Eat at Chinese New Year to Bring Good Luck?

5. Avoid washing hair and getting a haircut.

Hair must not be washed on Chinese New Year's Day. In Mandarin, hair (发, fa) has the same pronunciation (and indeed is the same character) as fa in facai (发财), which means 'to become wealthy'. Therefore, it is seen as not a good thing to "wash one's fortune away" at the beginning of the New Year.
Avoid cutting hair on this day, as it is believed that it might bring misfortune to uncles.

It is increasingly popular, however, to have a haircut or get a new hairstyle before Chinese New Year for a new look (new 'wealth') in the coming year.

7. Needlework should not be done.

Needlework should not be done.

In the past, there was a lot of needlework for women. But they didn't do any needlework, even sewing on a button, from the first day to the fifth day of the first lunar month. Otherwise, they thought the coming year would be a "hard year" (with lots of sewing).

8. Don't use scissors or knives.

The blades of the scissors are thought to be like sharp lips when people quarrel. Using scissors on the first day of Chinese New Year is perceived as an invocation for quarrels with others in the coming year.

The use of knives is to be avoided for any accident, whether harming a person or tool, is thought to lead to inauspicious things and the depletion of wealth in the coming year.

9. No odd amounts of lucky money.

Don't give an odd amount of money in a red envelope. Chinese people like even numbers, with the traditional belief that good things always come in doubles. But also avoid unlucky numbers such as 4 and 40, as 4 sounds like death in Chinese. See more on how to give a red envelope.

Don't give certain gifts, like clocks, scissors, and pears, as they have a bad meaning in Chinese culture. Read more on what not to give at Chinese New Year.

Breaking symbolizes incompleteness and bad luck. Breaking a bowl, plate, glass, vase, or mirror during the Spring Festival is considered a bringer of bad fortune, monetary loss, or family breakup.

If something is broken accidentally, people usually use red paper to wrap up the fragments, and then say "Sui sui ping'an" which means 'all year round safe and sound'. In Mandarin, 碎 (sui, meaning 'broken') and 岁 (sui, meaning 'year') sound the same.

12. A married daughter is not allowed to visit the house of her parents on Chinese New Year's Day.

The cry of a child is believed to bring bad luck to the family, so parents do their best to keep children from crying by whatever means possible.

A visit to the hospital during this period is believed to bring illness to the person in question for the duration of the coming year; therefore visits to the hospital are avoided, except in cases of extreme emergency.

Money should not be lent on New Year's Day, and all debts have to be paid by New Year's Eve, and, if someone owes you money, do not go to his or her home to demand it. Anyone who does so it is said will be unlucky all the year.

Do not wear clothes that are damaged. If kids especially wear such clothes in the first lunar month, it is said to bring bad luck.

Red is a lucky color during Chinese New Year.

Do not wear white or black clothes as these two colors are associated with mourning traditionally.

Killing should be avoided from the 1st to 15th of the Lunar New Year as blood is considered an ill omen, which will cause misfortunes such as a knife wound, or a bloody disaster. People usually kill chickens, ducks, pigs, and fish before Chinese New Year or on Chinese New Year's Eve.