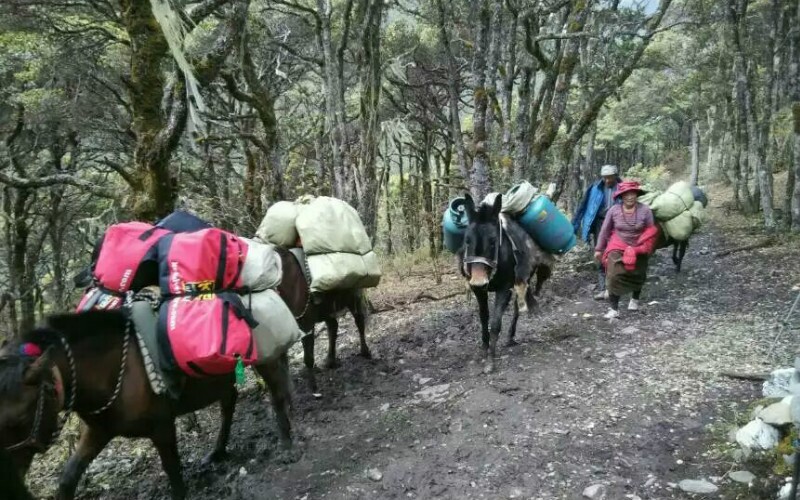 The Ancient Tea Horse Road (in China) was a trade route mainly through Yunnan, Sichuan, and Tibet. From the 6th century to the 20th century, people in Sichuan and Yunnan provinces traveled by foot and horseback with pack horses to exchange tea for horses with people in Tibet - and thus the pathway was called the Tea Horse Road.

Standing on the road, you can still clearly see the 70 cm-deep ruts in stone slabs caused by the stamping of horses' hooves over the centuries. And it seems they have numerous stories to tell.

Aged altars on the roadside are engraved with all sorts of religious scriptures and mottos.

The Ancient Tea Horse Road is one of the highest and most precipitous ancient roads in the world, which has carried and spread civilization and culture for centuries. The Ancient Tea Horse Road rivaled the Silk Road trade routes for importance, and as the longest ancient trade road in the world, at more than 10,000 kilometers in length, but was certainly toughest to travel. Few people in ancient times could finish the whole journey.

Across the dangerous hills and rivers of the Hengduan mountain range (spanning the west side of Sichuan and Yunnan provinces and the southeast of Tibet), invading the wild lands and forests of "the Rooftop of the World", a mysterious ancient road winds and wanders. It is one of the most heart-quaking roads on this planet.

Origins of the Tea Horse Road

The Tea Horse Road originated from 'tea-horse trade markets'(茶马互市), the traditional 'tea-for-horse' trade between Han and Tibetan people. It began with Tibetan interest in tea in the Tang Dynasty(618–907), During the Song Dynasty, some places in Sichuan, such as Mingshan, had a specialized government agency (茶马司) to manage and supervise the tea-horse trade.

The complete length of the Sichuan–Tibet road was over 4,000 kilometers, with a history of 1,300 years.

The Sichuan–Tibet Tea Horse Road stretched from Ya'an in Sichuan to Lhasa via Luding, Kangding, Batang, and Chamdo in Tibet, and extended to Nepal, Burma, and India.

In the Tang and Song (960–1279) dynasties, the Qinghai–Tibet Highway became a major alternative for transporting tea to Tibet from Sichuan and other more eastern areas, taking the less-steep long way round through Chengdu, Xi’an (then Chang’an) and the Silk Road.

During the Ming Dynasty (1368–1644), the Sichuan–Tibet Tea Horse Road was officially recognized, and this helped the commercial towns and cities along the road to expand, and promoted commerce between inland areas and Tibet.

The Yunnan–Tibet Tea Horse Road was similarly formed in the late 6th century. It began from Simao (a major tea-producing area) and led to Lhasa, crossing Pu'er in Xishuangbanna, Dali, Lijiang, and Shangri-La, and continuing to Nepal, Burma, and India. It was thus the critical trade route connecting Yunnan to Southern Asia. Each station along the road could represent the end or the start of a business. At that time, the biggest trading transfer station was Kangding in Sichuan.

Kangding was the place where traders from the West needed to change their means of transportation or where they just traded with local people. In 1696, the Emperor Kangxi of the Qing Dynasty approved of the 'tea-for-horse' trade in Kangding, which made the place become a major commercial center between inland areas and Tibet.

Through Kangding, domestic commodities, such as silk and tea, were sold to the West and, in return, goods from Southern Asia, Europe, and America flowed to inland areas of China.

Development of the Tea Horse Road

The rise of the tea-horse trade boosted the local economy and enriched the culture of western China, while at the same time promoting development of the road.

The Ancient Tea Horse Road was spectacular. For travelers, however, it was a dangerous and risky journey. Transportation was very difficult in the southwest because there were lots of high and precipitous mountains, climbable only by narrow zigzagging roads, and rapid rivers to cross. Wheeled or waterway transportation was nearly impossible.

Under such circumstances, pack horses were the only means of transportation and made the Ancient Tea Horse Road special. The road was created by humans with their feet and horses with their hooves.

The roads created by traders connected communities in neighboring valleys and villages, and became the communication links for southwest China. The stations where traders stopped to do business later became towns or cities. Today's Lijiang is a well-preserved ancient town, known as an important survivor from the Tea Horse Road.

Abandonment of the Tea Horse Road The Ancient Tea Horse Road has been deserted for decades. With the rapid development of modern roads in the late 20th century, the ancient pathways have been superseded by the Sichuan–Tibet Highway and other Tibetan roads.

Explore the Tea Horse Road on a China Tour

Traveling along the Ancient Tea Horse Road is returning to nature, a trip for harmony between humanity and the environment, a trip of spiritual refreshment for urban people, and a trip of adventure and discovery.

See our Yunnan Tours for ways of seeing the ruins of this ancient business route. Extend a Chengdu tour to Kangding. Or contact us with your ideas for how you want to explore the Ancient Tea Horse Road.