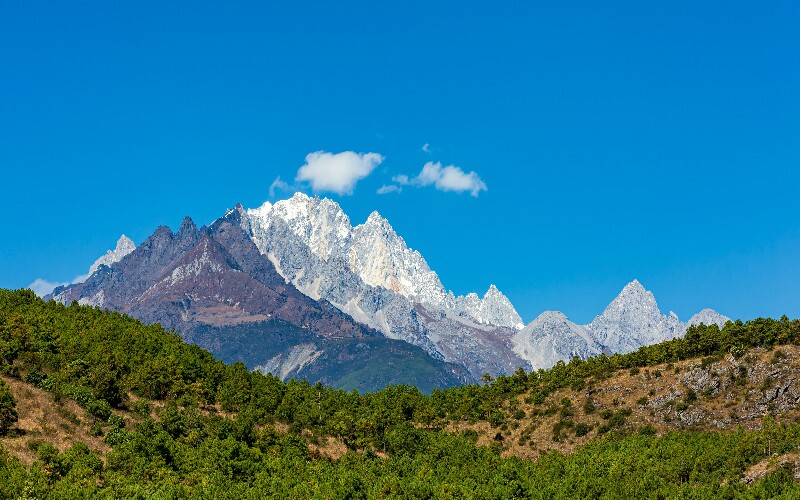 Lijiang attractions are dominated by the awesome scenery of places like Tiger Leaping Gorge and Jade Dragon Snow Mountain, but the ancient town of Lijiang itself is a window into China's past. With museums, temples, and ethnic minorities the tourist spots will certainly give you a cultural experience.

Lijiang is a great area for trekking, with mountains, lakes (like Lugu Lake), and the Yangtze in its thunderously gushing upper course. Our Lijiang tours take you to the ancient town surrounded by towering mountains and ensure you see the highlights.

Glaciers, canyons, waterfalls, and colorful azaleas blooming at different elevations, not to mention its snowy summits, make up the most beautiful scenery of the mountain. Its main peak, Shanzidou, 5,596 meters (18,359 feet) above sea level, has not yet been conquered.

Impression Lijiang is a magnificent outdoor singing and dancing performance demonstrating the traditions and lifestyle of the local ethnic people. The show is staged at 3,100 meters (10,100 feet) above sea level with Jade Dragon Snow Mountain as the breathtaking backdrop. To know more, see Impression Lijiang.

After turning a corner (its "first bend") in Stone Drum (Shigu) Town, the Jinsha River is still, wide, and gentle. Then it encounters the Jade Dragon Snow Mountain and Haba Snow Mountain ranges looming in front of it. However, it does not retreat, but breaks through a narrow channel and continues running north, thus forming the breathtaking Tiger Leaping Gorge.

Enjoying stunning scenery, Lugu Lake is known as "the mysterious oriental Kingdom of Women" for its unique Mosuo culture — Mosuo people have sometimes been described as the last matriarchal society in the world.

Baisha Village is the most primitive Naxi village. It is the earliest settlement of the Naxi people and the birthplace of Tusi, chief of the Mu clan.

Shuhe Ancient Town is one of the earliest settlements of the Naxi ancestors in Lijiang and also an important, well-preserved town on the Ancient Tea Horse Road, showing the Naxi's transition from agricultural civilization to commercial civilization. It is similar to Lijiang Ancient Town, but quieter.

9. First Bend of the Yangtze River

FIRST BEND OF THE YANGTZE RIVER

The Yangtze River surges down from the Qinghai-Tibet Plateau, enters Yunnan from Deqin County through Tibet, and then turned to the northeast due to the obstruction of the cliff in Stone Drum (Shigu) Town, forming a huge V-shaped turn for dozens of kilometers long. This is the "First Bend of the Yangtze River".

Check more information for the First Bend of the Yangtze River.

Get Your Ideal Lijiang Tour Here

All our Lijiang tours are fully-customizable. You could contact us with what you'd like us to do, including creating your own personalized tour from scratch.