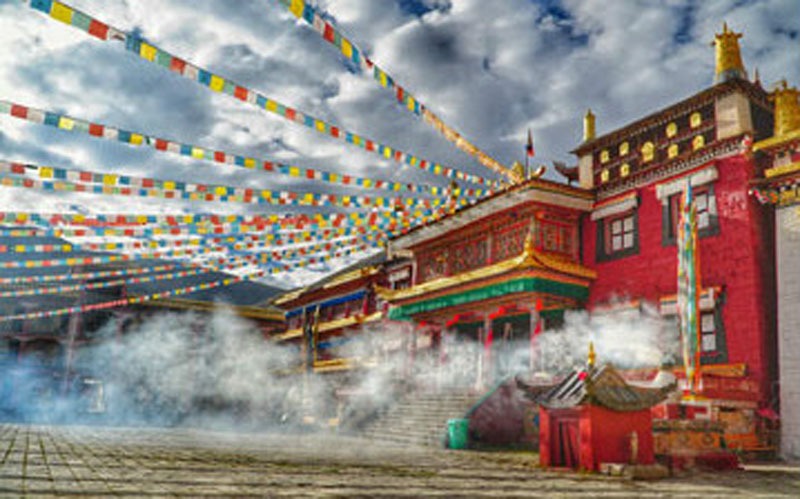 In the west of Sichuan province, set in a steep valley, Kangding used to be an important trade center between Chinese and Tibetans, lying as it did on the so-called Tea Horse Road: Tibetans from the west used to meet in Kangding to trade horses with tea porters from China.

The town today, with its fascinating blend of Chinese and Tibetan culture, still bears evidence of that shared history. In addition to Han Chinese and Tibetans who make up the majority of the population, there are also other minorities living in the town, including Hui, Qiang and Yi people.

It's worth spending a few days exploring the sights that Kangding and its surrounding area have to offer. If you're planning on heading further west to high-altitude attractions such as Seda, Gongga Shan or Tagong, it's highly advisable to first spend some time acclimatizing in Kangding, which lies at a more manageable 2,500m.

Paoma Mountain, whose highest peak is over 5,500m, lies just to the south of Kangding town. It is of spiritual importance to Tibetans, who hold a Festival on the mountain each year around May to commemorate the birthday of the Buddha.

The Walking Around the Mountain Festival attracts Tibetans from the surrounding area who set up camp on the mountain and participate in wrestling and horse racing (the name Paoma Shan literally means 'horse running mountain' in Chinese).

The mountain is also famous across China thanks to its mention in the Kangding Love Song, which was written in the 1990s (check out the lyrics in Tibetan, Chinese and English on a plaque in Kangding's town square).

The Paoma Monastery on the mountain is also worth visiting. It only takes a couple of hours to reach the monastery on foot, or you can take a cable car up. Note that there is a small admission fee that must be paid before you can enter the monastery grounds. It’s worth it though as the walk takes you past rows of Tibetan prayer flags fluttering in the wind, monasteries and the most magnificent views over the whole of Kangding.

The Jingang Monastery (or Dordrak Monastery, as it’s known to Tibetans) is perhaps the most well-known of the four Buddhist monasteries in Kangding, the others being Ngachu Monastery, Lhamo Tse and the Paoma Monastery.

Located in the south of the town near the start of the trail up Paoma Mountain, the monastery is some 400 years old. The prayer wheels, stupas and tankas as well as the ornate temple itself offer visitors plenty of photo opportunities.

A tranquil high-altitude meadow lies at the top of the mountain to the north of the town. You’ll often find ponies grazing here, and it’s a wonderful place to stop for a picnic.

To reach it, follow the trail past Zhilam Hostel, which leads you up past an electricity pylon, through a forest and under numerous Tibetan prayer flags. The walk takes about 2 hours and is pretty steep, so be sure to bring plenty of water with you.

Kangding (or Dartsendo in Tibetan) is the capital of Ganzi (or Garze) Tibetan Autonomous Prefecture.