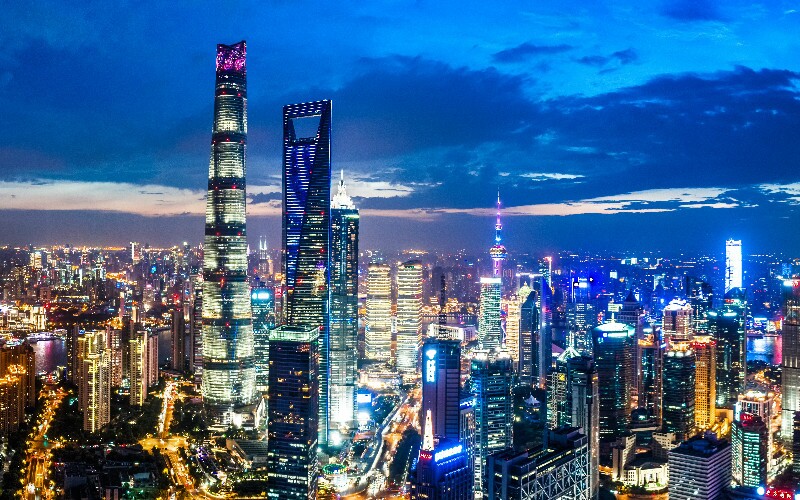 When it comes to China, you may think of the Great Wall, the Forbidden City, and the profound history. This time, however, we want to show you another side of China. This is a new China — a country arming itself with technology to be stronger, more modern, and brighter.

Here, we will introduce the top eight smart cities in China. From this introduction, you will learn more about China and may get some inspiration if you want to experience a new China while traveling in the country.

As the capital city, Beijing is pushing the pace of construction of a smart city. The city’s public services in Beijing for residents are becoming simpler and more convenient via the Beijing Citizen Social Service Card, a virtual card that integrates all kinds of information, such as identity documents, social security, health conditions, and education information.

Robots working in the AI hot pot restaurant in Beijing

The first AI hot pot restaurant has appeared in Beijing. From ordering to allocating to servicing to cleaning, the whole process is done by the smart unmanned system.

In the future, Beijing plans to build a smart museum project, which can reproduce famous exhibition halls of major museums in 360 degrees. Using a remote control, the user can switch between different museum scenes.

Shanghai has a one-stop public service platform for citizens — Citizen Cloud. At present, 104 public services have been provided on the platform, covering six categories. These include personal information, medical and health care, transportation, social security, community life, and tourism and leisure, with more than 7.6 million citizens registered on the platform. In the field of smart economy, cloud computing, big data, artificial intelligence, and other related industries are becoming the focus of development in Shanghai. If you are interested in Shanghai’s industrial development, you can check out the Top 5 Places for China Factory Tours. As an emerging city, Shenzhen has proved itself to be powerful with its 30 years of thriving development. In recent years, Shenzhen's digital economy and smart industry have always been in a leading position in China and even in the world. A large number of world-class high-tech enterprises, including DJI, Huawei, and Tencent, have been founded there.

Shenzhen's electronic information industry is very developed, which will be a good foundation for the construction of a smart city. It has the largest electronics market in the world, selling everything from the tiniest screws to a complete set of devices. Plus, with a large number of innovative professionals, Shenzhen is destined to be extraordinary. Experience a "cashless society" in Hangzhou

Hangzhou, the capital of Zhejiang Province, has the reputation of “up above, there is paradise; down here are Suzhou and Hangzhou”. It is also the home of Alibaba. Alibaba has grown from a company with only 18 employees to an international giant in 20 years, covering e-commerce, finances, cloud computing, and big data services. It has brought great changes to Hangzhou.

The terms “new retail” and “cashless society” are trends in Hangzhou. Unmanned supermarkets, unmanned restaurants, and mobile payments are part of daily life in Hangzhou. Mobile payments cover almost every aspect of life. Hangzhou is becoming a cashless city.

Alibaba’s AI (artificial intelligence) City Brain system has been adopted for Hangzhou’s city management. Real-time traffic conditions are monitored and the vehicles on the road are counted. The system can adjust traffic lights according to the volume of traffic.

In the future, the City Brain system will be applied to social governance, urban management, and security. Known as a mountain city, Chongqing is not superior in its geographical environment and objective conditions but, in recent years, the city has been making continuous efforts in various fields relating to the construction of a smart city. By the end of 2017, there were more than 120 industrial robot enterprises in Chongqing, with an output value of 7.98 billion yuan, at an increase of 33% year-on-year.

With the launch of the urban big data joint innovation center and the first national 5G test site, Chongqing will become an important innovation base for China's digital economy and smart industry in southwest China. Chengdu has become a leading city for China's digital economy. It is the first city in China to have a gigabit network. People in Chengdu can deal with various issues, including traffic, education, health, employment, and commercial services, through an application.

By 2020, Chengdu will form a unified, accurate, and reliable urban information resource system. Chengdu is regarded as being the smart city with the most investment value. Wuhan has fully tapped the potential of big data to build 71 application systems including urban management, medical care, pensions, education, community services, and traffic, which provide convenience for the citizens and allow for better management of the city. Guiyang, the capital of Guizhou Province, is not well-known to foreigners. Located in southwest China, Guiyang used to be an undeveloped city but now it has become known as the “Big Data Valley” in China.

The China International Big Data Industry Expo has been successfully held in Guiyang for four consecutive years since 2015. FAST (Five-hundred-meter Aperture Spherical radio Telescope), the world's largest aperture, has been built in Guizhou. Many high-tech enterprises have chosen to build their big data centers in Guizhou, such as Alibaba, Tencent, and Apple.

As a big tourism province, Guizhou will combine big data, artificial intelligence, and tourism in the future to build a “tourism brain”, improving tourists’ experiences and the management levels within the tourism industry. Guiyang is considered to be the most promising smart city.

Experience a New China with Us

Do you wonder what is happening in China? We have selected the most representative cities to help you discover a new China. With unique experiences and interesting scenarios, you will gain deeper insights into a new China.