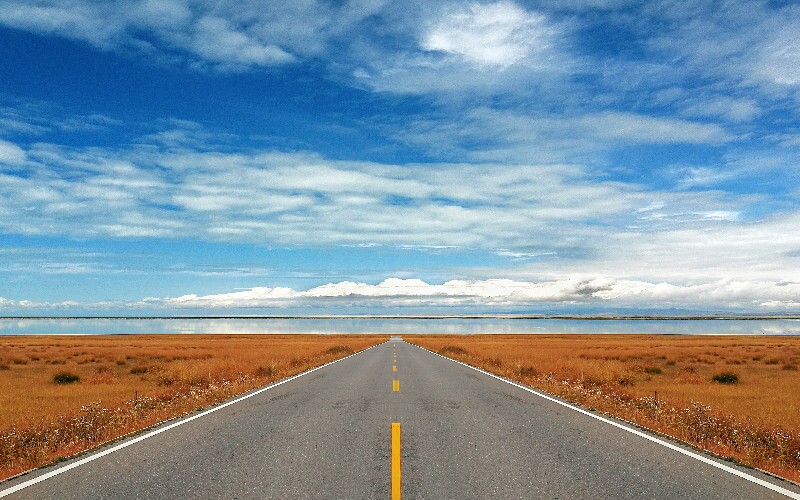 Traveling by Road in China 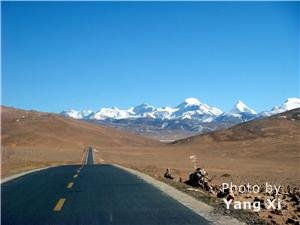 A highway in Tibet

Long distance bus travel isn't recommended for new visitors for various reasons. Trains or flights are better alternatives. However, you can get around almost anywhere by bus, and they can be the cheapest way to travel, so here are tips to help you navigate your way around and be safe along with suggested alternatives.

In the past 20 years, China built one of the world's best highway systems that covers most of the vast area except in the least populated regions such as Tibet, mountainous Qinghai, and most areas of Xinjiang. So bus travel is an option to most of the places tourists want to go to. The favorite tourist cities in Tibet and Xinjiang are linked by highways.

Extensive road system: In 2012, the total mileage of highways in China reached 2,633,060 miles (4,237,500 kilometers). Almost all towns and cities are accessible by highway, and buses can take you almost anywhere. The government is actually intensifying their highway construction effort in 2015.

Road quality: The quality of the highways and most roads is quite good, but be prepared for poor roads in remote areas such as Guizhou, Tibet and Xinjiang. So don't have high expectations about the travel facilities or comfort there.

Economy: Depending on what quality of bus you ride, you can travel for less money to most places by bus, but be prepared to pay in time and discomfort and perhaps other problems.

We generally recommend that tourists should avoid the long distance buses unless there are better alternatives especially if you are new to China and don't know the language. Here is why:

Sleeper buses (卧铺车, wòpū chē): Most long distance buses that travel more than five hours are sleeper buses. What this means is that instead of a seat, people lie in cots stacked two or three high and two usually three across. For foreigners not used to it, this arrangement is uncomfortable because the cots are small, sometimes not clean, and you're cramped up close with strangers.

Theft: While you are sleeping, people can steal your things or pickpocket you. This happens commonly enough. So keep on extra eye on your belongings. Theft is more common on buses than in the hard bed or soft bed cabins on trains. It is best to not go alone.

Cleanliness: Different classes of bus will travel the same route usually. The more expensive tickets are less cramped and usually clean unless you get on in the middle of its route after other passengers have already ridden. The locals tend to spit more and drop trash and food more. For lower priced buses, you can expect that the blanket might not be washed.

No bathrooms: Unlike in the West, there are no bathrooms. So is not uncommon for people to throw up on the bus or have other issues. Foreigners not used to this situation may often have big meals beforehand or take drink too much liquid. Bus drivers may not stop if you have to get off. There are usually stops every few hours though.

Miscommunication and scams: Since tourists usually don't know what to expect, ticket sellers might overcharge or sell fake tickets. You might get on the wrong bus or not get off at your stop. The bus driver might not speak English.

Tips on How To Travel by Long Distance Bus

Tickets for long distance buses (长途客车, chángtú kèchē) are sold at the bus station and need to be booked in advance. You simply need to go to the ticket window and tell the clerk your destination and the number of tickets needed. Or, you can ask someone to write down the Chinese name of your destination and show it to the clerk.

Unlike trains, buses do not have different classes within a single vehicle; however, ticket prices vary according to the condition of the bus, and the price difference might be large. It is always advisable to choose the more expensive ones, for they are cleaner, more comfortable, and more likely to be well air-conditioned.

Be aware that it is often possible to bypass the ticket window at a bus station and buy tickets from a ticket seller at the bus itself. People can bargain. Also be aware that ticket sellers scout out tourists at bus stations and offer tickets for buses from the station or nearby that might be less expensive.

Sometimes these buses give even better service and cleanliness and are a good deal, and sometimes it is a scam or a fake ticket. But we suggest tourists avoid the hassles and problems of trying to go on your own.

Be sure you know from what door or area of the station the bus departs and the time. People working at bus stations usually speak little English, but they try to be helpful. If you are not sure where your bus is or which bus is yours, you can show your ticket to the worker and he/she will show you.

What’s Inside the Bus

Better quality coaches with seats: These are usually used on routes less than six hours long. Usually an express non-stop bus is clean and air-conditioned, and it has safety belts and one attendant. The locals never use the safety belts. There might be bathroom. The windows are shut and the air-conditioning is good. A bottle of water and sometimes a local newspaper is provided for free to each passenger. Often a video is played on flat screens.

Regular quality coaches with seats: Used to travel within three or four hours, the most common regional buses are tolerably clean, and they have no attendant. These buses stop along the way to pick up passengers. The windows are open and the air conditioning might not be on. There will be no water provided for free to passengers, but you can buy some for yourself. This type of bus has no washroom.

Sleeper buses (卧铺车, wòpū chē): Most long distance buses that travel more than seven hours are sleeper buses. As explained above, people lie in cots stacked two or three high and two usually three across. Sometimes a bottle of water is supplied. There is usually an attendant or two, and often they'll speak some English. There is no bathroom. A sheet, blanket, and pillow might be supplied. On an overnight trip, such a bus will usually stop every few hours where people can buy food.

Though taking a bus is possible for tourists, there are better ways to travel to most places. 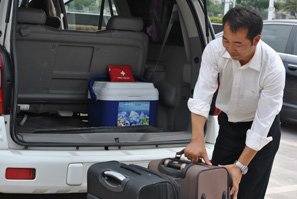 Private drivers: The most convenient, safe, and pleasant way is to go with a reputable private tour company. Our driver and guide will wait for you at your hotel and drive you around where you want to go by air-conditioned car.

We are known for providing hassle free and individualized help for our customers. We are especially helpful for tourists who don't speak the language and are new to traveling in China.

Bullet trains: On routes to cities where it is available, we recommend the speed, safety, convenience and low prices of the bullet trains. China's new bullet train system is unique in the world for its size and low priced tickets. For example, you can travel between Beijing and Shanghai by the superfast G train in five or six hours for 88 USD. China Trains Schedules and Booking>>

Domestic flights: For travel where there are no bullet trains, such as to the far west, to the northwest, or to the southwest and Tibet, taking a flight is the fastest and safest way.

City buses: Once the main form of public transportation, you could use these to travel around. In most cities, tickets cost only about 2 RMB (30 US cents), but they are often crowded, especially at rush hour, and there is a good chance a tourist might get on the wrong bus or miss their stop. Instead we suggest you take the subway or a taxi.

Subway: When you arrive at a city, we suggest you take the local subway instead of experiencing the problems of city buses. Subway lines are now operating in about 25 cities, and they are best for tourists for the English language help, safety, speed, and economical prices. Tickets may only cost about 2 RMB (30 US cents).

Car rental: Many tourists ask about car rental services in China. We don't recommend it for tourists. First of all, it is illegal for foreigners to drive without a Chinese drivers license in almost the whole country.

In Beijing and Shanghai, there are special laws that allow foreigners to rent cars at the airport and drive within the city with an international license, but there is a great danger to tourists driving in these cities. The unusual driving conditions, Chinese signs, unfamiliar laws, and congestion make this a poor option.

As one of China's biggest travel and tour companies, we can help you go almost anywhere. Tell us how we can help, and we'll also arrange accommodations, tours, and meals. Our guides can help interpret. Save time and money too.