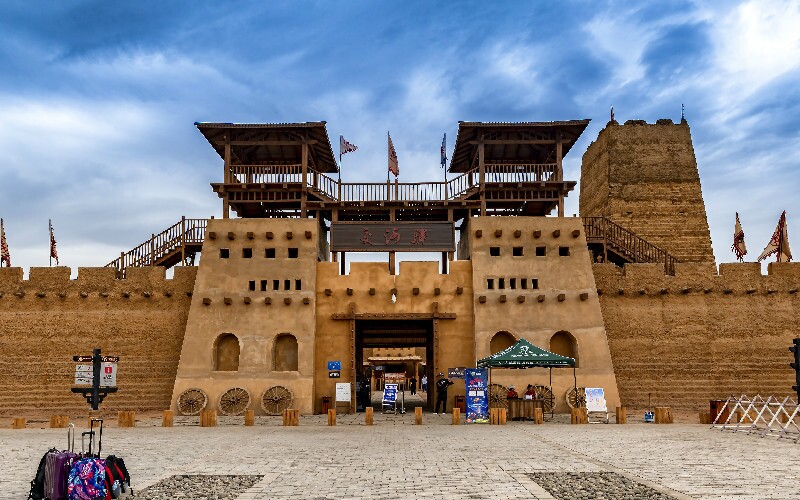 The Jiaohe Ruins — a Disappearing City of Earth

The Jiaohe Ruins are what's left of the world's 'largest, oldest, and best-preserved city of raw-earth buildings'. This big ancient city was dug out from Turpan's yellow desert siltstone. Most tourists think that the ruins of the ancient city of Jiaohe are Turpan's best travel highlight.

The ruins are disappearing so visit the site while it is still possible. We know the story behind the city of earth and the best visiting route. You will also take great photos when you visit the site with us as there won't be other tourists in your pictures.

The Layout of the Jiaohe Ruins

There was a long main street that went down the center, which divided the city into two parts. The western part was for common people, and the rulers lived in the east.

How Jiaohe City Was Built

Local kingdoms, and later Tang Dynasty Chinese, constructed the city out of the compressed loess soil of the desert. They excavated the ground to leave standing structures or dug rooms underground. The soil they dug out was rammed to build rooms above ground.

The underground rooms were cool, providing shelter from the strong sunlight in summer and the strong wind in winter. The rooms above ground was used as living rooms and kitchens.

The most wonderful thing was that the landscape of the location formed a perfect "city wall" so the people didn't need to build one. Jiaohe is on an island plateau about 20 to 30 meters (65 to 100 feet) high. The city is isolated by two braids of a river. The rushing water eroded steep cliffs that made a perfect city wall.

How Jiaohe Was Defended

Jiaohe is surrounded by two adjoining canyons with steep cliffs and two branches of a river running through. This made access to the city very difficult.

The city is said to have had only two gates. One was at the southwestern corner and one was in the east. It was unusual for a city of this size to only have two gates. There may be vestiges of a third gate.

When you walk among the ruins, you will find that there are hardly any windows, even in buildings with 6-meter-high walls. When you stand in a high place, you will only see high walls. All the houses were divided into different walled areas. Each area had a door, which was opened in the daytime and closed at night.

When invaders came, they could only stand on the roofs, but would have had difficulty finding doors to enter any of the houses.

Now, however, the roofs have eroded and only the high walls remain intact, so you can still see the structures of the houses and other areas.

The History of Jiaohe

In tombs near Jiaohe that date to 300 BC, the remains of Caucasians were recently found so some historians have suggested that the first inhabitants of the Jiaohe islet might have been Caucasians. The Gushi people, who were Caucasians, lived on the islet in a town called Cheshi.

In about 100 BC, the Han Dynasty began to trade with Western countries. The Han people wanted to control the trade and to protect it from rival empires.

In about 60 BC, the inhabitants of Cheshi came under the control of the Han Empire. Perhaps 1,000 troops were stationed there after that.

Around 200 AD, the Han Dynasty lost control of the area and then the Han Empire collapsed. Other kingdoms controlled the area until the Tang Dynasty.

In 640 AD, a Tang general conquered the area including Gaochang. Most of the construction that remains is from the Tang Dynasty era. It is said that 7,000 people lived in Jiaohe in the 8th century.

Why Jiaohe Was Abandoned

In the middle of the 14th century, the Mongol Yuan Empire collapsed. The resulting disruption of trade, warfare, and perhaps also a lack of water as well as a drier and colder climate associated with the Little Ice Age, caused people to abandon the fortress city.

Visiting the Jiaohe Ruins with Us

If you want to hear more stories about the Jiaohe Ruins, our knowledgeable tour guide will tell them to you during your trip. Just tell us your interests and requirements, and we will tailor-make your tour of the Jiaohe Ruins and any other Turpan and China highlights you are interested in.

Alternatively, you can have a look at the following itineraries that include a trip to the Jiaohe Ruins, for inspiration. They can be customized for you.