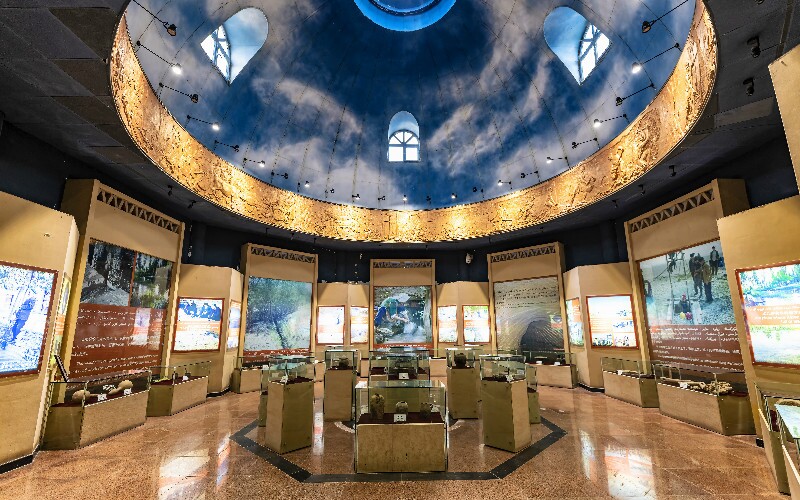 The Karez Well System is an important ancient irrigation system that is still used in Turpan, Xinjiang, in Northwest China. (Karez is the Uyghur word for 'well', from the Persian for 'channel'.) The tunnel system provides water for local people to drink as well as to water their crops. Locals dug wells and tunnels to transfer water from mountains miles away from their farmland.

Why the Karez Well System Was Built

In order to get enough water in the area for themselves, the caravan traders, for others passing through Turpan, and for agriculture and their cattle, the locals dug long underground tunnels that brought groundwater from the mountains to the north.

But why were karez wells used instead of ordinary wells? Why did they make the task so difficult by digging wells and miles of long tunnels? Turpan is an inland basin that's far away from the sea and surrounded by mountains. Humid air can't get in the basin and, as a result, there is very little rainfall. Groundwater is so deep there that it was not possible to get the amount of water needed by digging ordinary wells.

Turpan lies in the third deepest inland depression in the world. Along the northern rim of the depression is a range with high mountains and snowcapped peaks called the Bogda Mountains.

A lot of water is released as the snow melts on the mountains and the locals had to think of a way to bring it down to the basin without the water evaporating or being lost by ground seepage. As a result, they had to make underground tunnels. The locals took advantage of the big difference in elevation to make gently sloping underground tunnels (qanats or karez) to carry the water into the valleys.

Why the Karez Well System Was So Important The system helped to make the Turpan area an oasis on the Silk Road route. It also helped to make Turpan an important fruit and vegetable growing area in China. It is said that in 1949, about 600 karez were in use and they supplied most of the water used for irrigation.

In modern times, however, concrete canals and ditches were built, pipes were installed, and hundreds of wells were dug.

Now only about 300 karez are still used, and they supply about 16 percent of the water used for irrigation in the Turpan area.

The Structure of a Karez Well Vertical wells were spaced at intervals that allowed people to pull up water in buckets or to go down into the underground tunnel for repairs. These access tunnels had mounds around them, and the long lines of mounds stretching across the horizon looked like rows of gigantic ant hills.

Underground tunnels divert water from the mountain groundwater, carrying it to the farmland at a lower altitude. The underground tunnels eliminate the water evaporation that occurs rapidly with surface water in Turpan's hot and dry climate, and the so water can flow for miles. A ground canal is a small canal on the ground that enables people to use the water conveniently. Usually, a ground canal is built near farmland or in a residential area. The locals even put their beds above or near the ground canals, so they will get a cool environment for sleeping.

The Length of a Karez Well System

A karez well consists of vertical wells and underground tunnels. As the water originates from snowcapped mountains and flows deep underground far from farmable land, the tunnels are very long. Usually, a karez system is at least 3 kilometers (2 miles) long.

How to Build a Karez Well System Hundreds of years ago, when there was no pumped groundwater and no rainfall to fill an ordinary well in Turpan, the locals built karez wells. The most difficult part of building a karez well system was to build a straight underground tunnel.

There is a distance of about 20 to 70 meters between each two vertical wells. Without the use of a compass to set the right direction, the ancient Chinese people devised two ways of ensuring they were digging in the right direction and building straight underground tunnels, avoiding twists and turns that would lead to erosion and wasted effort. People tied two straight rods together with two ropes of the same length, so that one rod hung parallel to and below the other rod.

By leveling above ground and multiplying the inclination by the distance between wells they calculated the depth the next well should be. Then, by sighting along the two rods above ground, they made sure the rods were aligned identically.

Then the worker could dig the tunnel according to the direction the underground stick was pointing in. The stick method allowed for underground tunnels to be dug successfully between two vertical wells.

Unlike the two-rod method that required people sighting along rods above and below ground, the oil lamp method simply required digging a tunnel in the direction of the shadow cast.

An oil lamp was seated in the middle of a tunnel several meters back from the digging face, and a worker turned his back to the oil lamps and faced his shadow. The oil lamps used had a special design that meant they only cast light in one direction.

This method was so effective that two workers could dig two tunnels according to the direction of the shadows in front of them until they finally connected.

The Karez Well System Was a Dangerous Project

The Karez Well System was a very difficult project. In the Turpan area, the soil is hard calcareous clay. It's hard to imagine the difficulty the workers had trying to dig miles of narrow tunnels and wells.

The workers dug narrow tunnels that only allowed them to crawl along. The water from melted snow was cold and seeped into tunnels near the water table. The workers sometimes had to kneel in the ice-cold water to dig the tunnels. Sometimes there would also be tunnel collapses or a lack of oxygen.

How to Visit the Karez Well System It's recommended to have a tour guide with you who can introduce the Karez Well System to you. If you don't listen to a good introduction, the karez wells may simply seem like any other wells to you. Your tour guide will tell you about the interesting things that happened in the karez wells, such as people sleeping on the ground near the karez wells to benefit from the cool temperature.

The best place to visit the karez wells is the Turpan Karez Museum (吐鲁番坎儿井博物馆 also called the Turpan Water Museum). The museum not only has pictures and models detailing the history of the Karez Well System but there are also real underground tunnels that you can walk through to see an actual karez.

It's the most popular site that people go to when visiting Turpan, especially during the hot summer. This is because the temperature in the Karez Well System is very cool and comfortable.

During ancient times, when caravan traders passed through the area as they went to or from the Gansu Corridor to the east, the Turpan area was a place to trade, get provisions, and rest. There was a string of forts, cities, and small kingdoms along the northern rim of the Turpan Basin and the Taklamakan Desert.

In the Turpan area in the Tang Dynasty (618–907), there were two fortified cities called Jiaohe and Gaochang, which were about 44 kilometers (27 miles) apart. The caravans needed fodder for the camels and other animals and food for the guards, traders, and travelers. This meant there was a high demand for water and food to support the traffic through Turpan, and so the karez were used to supply some of the water.

After a period of interruption, Silk Road trade prospered again during the Yuan Dynasty (1279–1368). The Yuan Dynasty was also called the Mongol Dynasty. The Mongolians conquered China and many other countries. They made a big Eurasian empire stretching from Korea to Hungary, and they guarded the Turpan trade route. They destroyed both Gaochang and Jiaohe, but they encouraged trade through the area. When their empire collapsed, regional conflicts interrupted trade.

From the 1500s, reduced demand for China's goods, instability in central Asia, and merchant ships plying the coast of Ming China made the northern Silk Road routes virtually useless for long-distance trade, but people continued using the Karez Well System and have continued to do so in modern times.

Who Created the Karez Well System

The Turpan karez systems are like the qanats that were used in Persia and the Middle East. It is not known who originally created this technology.

It is said that qanats started to be used in Central Asia in about 800 BC. It is also not known when the first karez was dug in the Turpan area.

For people with only Iron Age tools, digging these tunnels was practical. They could be dug and maintained using simple tools, buckets, and draft animals to help pull up the dirt. Our local guides know the local culture well and, of course, all the interesting things there are to know about the Karez Well System. If you want to visit the Turpan Karez System, have a look at our customizable tour ideas for Xinjiang and China's Silk Road.