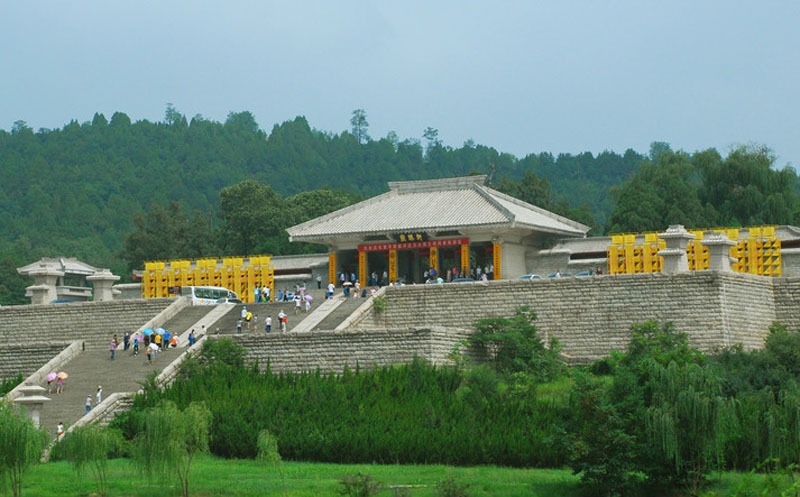 The Yellow Emperor (Huangdi in Chinese) is the legendary ancestor of Chinese people and the symbol of Chinese civilization. The mausoleum of the Yellow Emperor is the most important ancient mausoleum in China, praised as the First Mausoleum in China. On the Qingming Festival which usually falls on April 5, Chinese people from different places get together here to hold a memorial ceremony for commemorating the Yellow Emperor. It is located at Mount Qiao, 500 meters (547 yards) north of Huangling County of Yan’an, about 200 kilometers (124 miles) north of Xi’an (the capital city of Shaanxi Province). Therefore Yan’an is considered as the birthplace of Chinese civilization. It is definitely the must-see when people visit Yan’an.  Just ask us to customize a Yanan tour to your needs.

It is located at Mount Qiao, 500 meters (547 yards) north of Huangling County of Yan’an, about 200 kilometers (124 miles) north of Xi’an (the capital city of Shaanxi Province).

The Yellow Emperor Temple is also called Xuanyuan (the given name of Yellow Emperor) Temple. According to historical record, Xuanyuan Temple was first built at the western foot of Mount Qiao during the Han Dynasty (206BC-220AD). It was restored during the Tang Dynasty (618-907). It was badly damaged by floods and moved to the eastern foot of the mountain by Emperor Song Taizu during the Song Dynasty (960-1234 ) where it now stands.

There is a pond on the way to the temple. It is named Yinchi, taking an area of 200,000 square meters (215278 square feet). The water adds much vitality to the ancient temple. A 9-meter-wide and 66-meter-long stone bridge called Xuanyuan Bridge crosses over the pond.
Walking across the bridge and then climbing 95 steps, you will get to a square in the front of the Xuanyuan Temple. The square takes an area of 10000 square meters (107639 square feet), paved with 5000 big flagstones.

When you enter the gate of Xuanyuan Temple, you will see a huge cypress. It is 30 meters (98 feet) tall, 3 meters (10 feet) in diameter and 11 meters (36 feet) in girth. As a Chinese legend goes, it was planted by the Yellow Emperor personally and would over 4000 years old, the oldest cypress in China. The main hall is magnificent which houses the stone sculpture of the Yellow Emperor. There are over 40 steles of the past dynasties in the temple.

Mount Qiao (Bridge Mountain in Chinese) gained its name from its bridge-styling form with Jushui River flowing at its foot. The mountain is covered by 80,000 evergreen and luxuriant cypresses with history of thousands of years, which form the largest cypress forest in China. The mausoleum of the Yellow Emperor is hidden inside the dense cypress forest. It is a 4-meter-high (13 feet) mound, around which is a 1-meter-high (3 feet) brick-wall. According to historical record, many emperors held memorial ceremonies to the Yellow Emperor. There is a 20-meter-high (66-feet-high) platform located about 40 meters (about 44 yards) ahead of the tomb. It was the venue where the Emperor Wu of the Han Dynasty held ceremonies honoring the Yellow Emperor. If you want to overlook Mount Qiao and get the panorama of Xuanyuan Temple and Huangling County, a five-story and 20-meter-high (about 66-feet-high) pavilion called Longyu Pavilion provides an excellent vantage point.

The legend of Yellow Emperor

In legends, the Yellow Emperor was the title of an ancient imperial emperor—Xuanyuan Shi. His surname was Gongsun (or Ji) and named after his birth place-- hillock of Xuanyuan. The Yellow Emperor appeared exceptionally clever. He could spoke shortly after he was born. When he was 15 years old, there was nothing that he didn't know. Later on, he ascended to the throne of Xiong Kingdom.

He was agile as a teenage, amiable and capable as young adult, wise and persistent as an adult. He is a legendary character and is considered as the father of the Huaxia Tribe. In the meantime, he was the leader of three kings and five emperors (in ancient China, the Fu, Nuwa, Shen Nong were called "three kings" and Taihao, the Yan Emperor, the Yellow Emperor, Shaohao and Zhuanxu were called "five emperors").The Yellow Emperor was endorsed as ancestor of Taoism and enjoyed special status in Taoism.

During Yellow Emperor’s long reign, the country enjoyed strong state power, stable political status and cultural progress. During the period, there were many inventions and production, such as text, music, calendar, palaces, ships, clothing and vehicle with compass. In line with the legends, the Yao Emperor, the Shun Emperor, the Yu Emperor and the Shang Emperor were all his descendants, so the Yellow Emperor is considered to be the common ancestor of Chinese people. It is said that the Yellow Emperor lived for 110 years. One day, a yellow dragon from heaven flied down to take the Yellow Emperor to heaven. The Yellow Emperor knew that he could not disobey the destiny. Therefore he rode on the dragon. On their way back to heaven, when flew over Mount Qiao of Huangling County, the Yellow Emperor asked to be allowed to go down to comfort his people. People cried out and pulled on the Yellow Emperor’s clothes to try to keep him on earth, but it was in vain. He only left his clothes. Afterwards, people buried his clothes at Mount Qiao and established the mausoleum.

Every nation has its own legend period. The Yellow Emperor is a representative during China's legend era. He possessed many merits and made lots of creations, leading Chinese from savage to civilization. Consequently, he was regarded as a humane primogenitor. According to New Text of Twenty-five Histories, the Yellow Emperor probably exists for real in the history. He was a leader of alliance tribes in the central plain area during the patrilineal clan period. He unified the tribes in the central China through wars and did a lot of good deeds, and thus occupied an important position in ancient people's oral instruction history.

See the best of Yanan with our customize a Yanan tour to your needs.