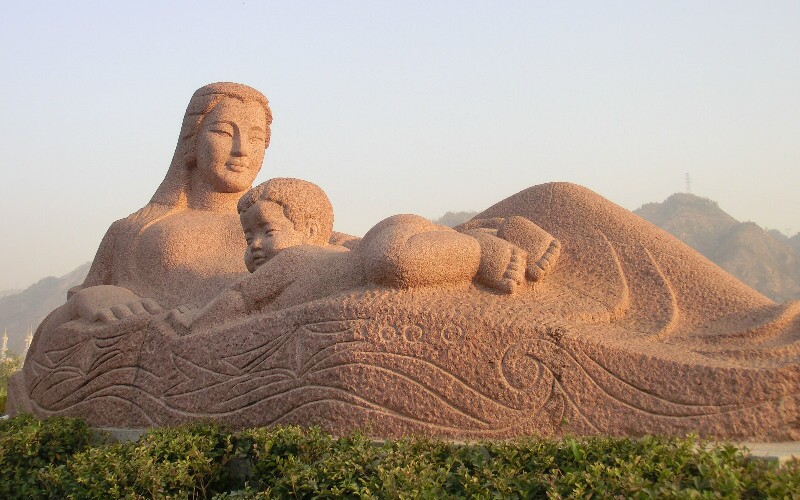 The Yellow River, is the second longest river in China after the Yangtze, and the sixth longest in the world, but less than the 100th for discharge. It dominates dry northern China. Unlike other rivers, it seems to decrease in flow as it goes.

Mouth: the Bo Sea at Shandong Province, a gulf on the East China Sea

Chinese people say the Yellow River is "the Mother River of China" and "the Cradle of Chinese Civilization". Historical evidence shows that the lower Yellow River basin was where Chinese civilization began, and the most prosperous region in early Chinese history.

Prehistoric Chinese lived just north of the Yellow River Basin at Zhoukoudian, south of Beijing, and around Sanmenxia on the Yellow River, midway between Xi'an and Zhengzhou.

Xi'an, on the Wei tributary of the Yellow River, was a prominent Chinese capital in several dynasties from the Qin Dynasty (221–206 BC) to the Tang Dynasty (618–907). The Yellow River Basin was the center of Chinese politics, economy, culture, and innovation for about 3,000 years.

3. The Muddiest Major River on Earth

The Yellow River got its name because of the ochre-yellow color of the muddy water in the lower reaches of the river.

Each year, the river carries 1.6 billion tons of fine sediment (loess) when its middle reaches flows through China's Loess Plateau region. It carries more sediment per cubic meter than any other major river in the world, and deposits most of it long before it reaches the delta.

Hukou Waterfall — the most sedimented major waterfall in the world

Hukou Waterfall, in the middle reaches of the Yellow River, is the largest "yellow" waterfall in the world, and the second largest waterfall in China after Huangguoshu Waterfall.

The waterfall is named Hukou (壶口 /hoo-co/ ‘Kettle Mouth’) because the riverbed there has eroded into a spout like an enormous teapot, from which the rushing "yellow" water pours out.

When the mighty Yellow River flows through the gorge at Hukou, it abruptly narrows, turning the water into rapids, ending in thundering chocolaty billows. The magnificent waterfall is 15 meters (50 feet) high and 30 to 50 meters (100–160 feet) wide, depending on the season.

Usually a river is the lowest point around — not so with the Yellow River!

Due to sediment accumulation, and successive levees built to contain the raised flow, the riverbed is up to 10 meters (33 feet) above the surrounding cities and farmlands in most of its lower reaches. So it is also called "the Hanging River" or "Above Ground River".

The Yellow River is the only river where ships sail overhead!

Because of the continual rise of the riverbed caused by the accumulated silt, the river tends to overflow its banks, and sometimes leave its banks far behind (see below). Surrounding areas were extremely prone to flooding and river course change.

The Yellow River has long been known as "China's Sorrow." It was the most destructive and dangerous river in the world, until damming and massive abstraction have reduced it to a carefully controlled trickle.

Between 602 B.C. and 1946, it has flooded 1,593 times, each time killing thousands by drowning, disease, starvation, and loss of livelihood. The 1931 Yellow River Flood was the most devastating natural disaster ever recorded, killing 1–4 million (apart from famines and plagues).

7. Over 20 Major Moves — from Tianjin to Shanghai

3,000 years ago the Yellow River emptied into the Bo Sea near Tianjin and Beijing, 200 km north of where it does now.

But in the last 1,000 years (and as recently as 1947) it has emptied into a tributary of the Yangtze, flowing out at Shanghai — 600 km south of its current delta.

It has changed its course dramatically an average of about once every 100 years, causing huge devastation.

8. Reduced to Nothing Annually Since 1972

Due to decrease in rainfall in the Yellow River catchment, and increased demands for irrigation, etc., the lower reaches of the Yellow River dried up completely for the first time in 1972, and since then have dried up almost annually.

If you want to visit any of these cities, China Highlights can offer you assistance. Contact us and we can tailor-make a tour for you according to your requirements.