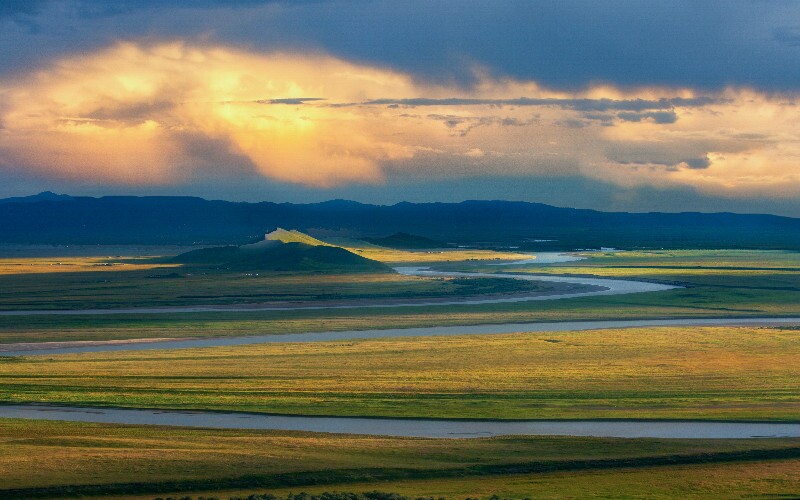 The Geography of the Yellow River

The Yellow River is the fifth longest river in the world, but over 100th for discharge! This is because it flows through dry areas of North China, which draw on it for agriculture, industrial, and municipal water needs.

Known as "the Mother River of China", it still contributes greatly to the water needs of some of the major historical cities of China.

Once known as "China's Sorrow" its flooding has largely been alleviated by dams and dykes (and the heavy abstraction mentioned above).

The Course of the Yellow River

The Yellow River originates from the Roof of the World (the Qinghai-Tibet Plateau) in the Kunlun Mountains in  western China.

The upper reaches of the Yellow River

It flows through nine provinces in the dry north of China: Qinghai, Sichuan, Gansu, Ningxia, Inner Mongolia, Shanxi, Shaanxi, Henan, and Shandong, before flowing into the Bohai Gulf at the city of Dongying.

The Yellow River is 5,464 kilometers (3,395 miles) long, the second longest river in China after the Yangtze River.

The Ordos Loop is the characteristic rectangular "n" shape that the Yellow River takes round the city of Ordos in Inner Mongolia, as it deviates 600 km north, 300 km east, then 600 km south.

Tributaries of the Yellow River are many, but none particularly famous, including the White, Black , Qingshui, Fen, Wei, Luo, Qin, and Dawen rivers.

The Yellow River Basin is located between Qinghai and Shandong provinces, with a characteristic broad serpentine shape, taking it as far north as Inner Mongolia and as far south as Sichuan.

The Upper Reaches of the Yellow River

The source section flows mainly through remote pastures, swamps, lakes, and gorges between the source and its emergence into more populated areas at 1,600 meters (5,200 ft) above sea level around Lanzhou in Gansu Province.

There are three large reservoirs in the upper reaches with hydroelectric dams: Liujia Gorge, Lijia Gorge, and Longyan Gorge.

Higher up the two largest lakes are Ngoring Lake (Elinghu) and Gyaring Lake (Zhalinghu), where fish are plentiful and protected in the Three River Sources Nature Reserve. (The Yangtze and Mekong also have their sources in that area.)

The Middle Reaches of the Yellow River

Hukou Waterfall - the "Yellowest" Waterfall in the World

The "Yellowest" Waterfall in the World

Hukou Waterfall is the second largest waterfall in China and the most sedimented major waterfall in the world. Its width changes with season, from 30 meters (98 feet) to 50 meters (164 feet). It's 18 meters (60 ft) high, forming a magnificent scene, like a giant chocolate fountain. Learn more about Hukou Waterfall.

The Lower Reaches of the Yellow River

The Lower Reaches, from Zhengzhou to the Pacific (the Bo Sea Gulf), have a length of 786 km, and drain a mere 23,000 km2 (8,880 mi2), the size of New Jersey. Excessive sediment deposits have raised the riverbed several meters above the surrounding ground, forming the worldly famous "above ground river"!.