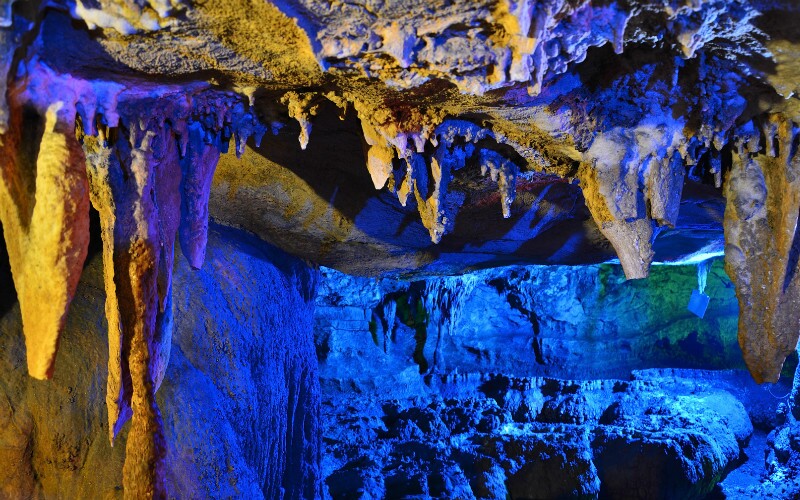 Yellow Dragon Cave, known as "the wonder of the world's caves", is one of the largest caverns in China. It is a karst cave, full of stalagmites, stalactites, underground streams, and large caverns.

You can enjoy a two-hour tour through the cave, including a boat ride and a hike with loads of steps.

Main Attractions in the Cave

Yellow Dragon Cave is a huge cave complex. Its largest caverns can be bigger than baseball fields. It is divided into dry and wet levels, consisting of a large number of chambers, pools, lakes, rivers, waterfalls, and hundreds of thousands of stalagmites, stalactites.

These underground miracles are given beautiful names, such as Dragon Palace, Fairy Palace, and Immortal Waterfall.

Covering an area of 6,000 square meters, Dragon Dance Palace (Wulong Ting舞龙厅) is the smallest hall among 13 halls in Yellow Dragon Cave. Legend has it that Dragon King holds a grand dancing party there every year. You can find many stalagmites standing there.

Dragon Palace (Long Gong 龙宫) is the largest hall with an area of 15,000 square meters and a height of 40 meters on average. It is a fantastic palace filled with about two thousand stalagmites standing in various postures.

Apart from stone waterfalls, you can also find a real waterfall in the cave. It drops more than 27 meters.

The river stretches for more than 2,800 meters. You will take a 10-minute boat ride on the river. You may have a chance to see giant salamanders. The boat ride is included in the ticket.

The Maze (Mi Gong 迷宫) is the highlight of Yellow Dragon Cave. It is located in the bottom of the cave complex, and filled with various kinds of stalactites and stalagmites. Some look like flowers, and some look like animals. It's full of imagery.

Travel through the cave begins with some stairs to climb and long walks, moving from hall to hall along the paths and bridges. And then you floatl on a boat along an underground river for about 800 meters. The full route through the cave takes 2–3 hours.

Know Before You Go

There are many stairs inside the cave.

How to Get to There

Yellow Dragon Cave is about 8 km east of the hotels at Wulingyuan. You can take public bus 1 at Wulingyuan Bus Station to get there, taking about 15 minutes. You can also take a taxi at a cost of 30 yuan.

Touring Yellow Dragon Cave with Us

Your tour to the cave will be more informative and interesting with a professional guide. He/she will not only show you the best of the cave, but share with you background information including legends and geographic knowledge.