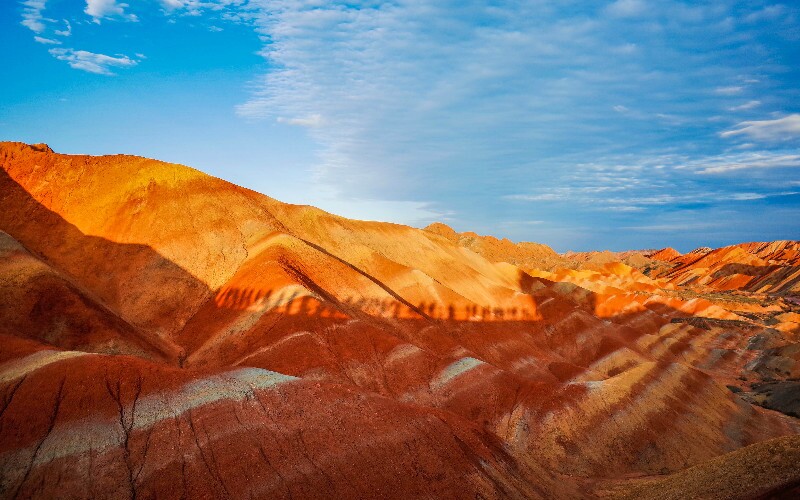 Zhangye Travel Guide - How to Plan a Trip to Zhangye

As an important staging point on the Silk Road, Zhangye linked the eastern and western routes. Zhangye is in central Gansu Province in the narrowest middle of the famous Hexi Corridor. Zhangye is between Wuwei city in the east and Jiayuguan in the west, with Qinghai Province to the south and Inner Mongolia to the north.

It’s also a film location recently made famous in China and abroad. You might be impressed by the spectacular landscapes in Disney's live-action movie Mulan, directed by Niki Caro. When Mulan is tearfully facing the sunset, the colorful landform behind Mulan is the beautiful Danxia “rainbow mountains” in Zhangye.

Things to Do in Zhangye

Zhangye was an important town on the ancient Silk Road, and now is a famous tourist city due in part to its long history and cultural relics, but mostly for its beautiful natural scenery. Zhangye Danxia National Geological Park is the must-see attraction in a Zhangye trip.

Giant Buddha Temple was built in the Western Xia Dynasty in 1098 AD. It houses China’s largest indoor reclining Buddha, which is 35 meters (115 feet) long. There are also many precious Buddhist scriptures.

Mati Temple Grotto is in the Yugu Minority Autonomous County in Sunan, about 65 km (40 mi) west of Zhangye city. It is famous scenic area, featuring Buddhist cave art, the scenery of the Qilian Mountains, and the culture of the Yugu Minority. Mati Temple Grotto got its name because of the “hoofprint” said to have been left by a heavenly horse when drinking water there.

The Black Water State archaeological site is about 13 km (8 mi) northwest from Zhangye city. There is a tombs complex of the Han Dynasty (206 BC – 220 AD) at this site, which covers about 4 square kilometers (1.5 sq mi). The Black Water State got its name because it was built along the Heishui (‘Black Water’) River, and the Black Water State Site is an ancient cultural site with artifacts dating back to the New Stone Age.

Besides the aforementioned Danxia park and cultural sites, Zhangye also has snow-capped mountains, grasslands, wetlands, forests, and deserts. It has become a new destination for photographers, and travelers often see it together with Dunhuang’s photogenic desert, 600 km (400 mi) west. If you’re interested, see our 6-Day Zhangye and Dunhuang Photography Tour.

Zhangye has a temperate arid climate with a low annual precipitation of around 200 mm (8 in). It is dry all year round. January is the coldest month with an average low temperature of -14°C (7°F), and July is the hottest month with an average high temperature of 30°C (86°F). In Zhangye summer is short, lasting from July to August, and winter is freezing and long, lasting from late November to March.

The best time to visit Zhangye is from June to September for the most comfortable weather. In September, the average temperature in the daytime is 23°C (73°F) and it is about 8°C (46°F) at night.  The temperature difference is large between day and night, so warm clothes such as thick jackets might be needed at night.

Tour booking is always tight during the summer high season, so early booking about one month in advance is suggested for Zhangye or Silk Road tours.

Where to Stay in Zhangye

As an important stop on the Silk Road tourist route, Zhangye, a small prefecture- level city, is also known by more and more people. There are no big hotels with international brands in Zhangye, but there are many medium-level hotels to chose from that are comfortable and clean. Travelers can choose to stay in Zhangye City Center or stay near Zhangye Danxia National Geological Park.

Compared to the surrounding area, you have more hotel choices in urban Zhangye, and the hotels’ conditions are better and more comfortable. Staying in the city center is more convenient for shopping and eating. They are also closer to the airport, high-speed railway station, and city attractions. However, it might be not convenient if you want to see the sunrise or sunset in the Danxia Geological Park, which is about 40 km from Zhangye city.

Zhangye’s Danxia mountains are the highlights of a Zhangye trip, and it is a must-do for some travelers to shoot the sunrise and sunset in the park. So, they usually choose to stay close to the geopark, even though the hotel service and facilities might be not as good as those in the city center.

Kaoshan Camp, near the West Gate of the geopark, is popular among travelers. Located adjacent to the Danxia mountains, Kaoshan Camp houses 70 tents for tourists, including unique Mongolian yurts. Night shows, bars, and barbecue are available in the camp.

If you want to stay in a Mongolian yurt in Kaoshan Camp, please contact us for booking.

How to Get to Zhangye

Zhangye is a small city, but it is convenient to get to Zhangye. You can take a flight, high-speed train, or long-distance bus to Zhangye.

Opened in 2011, Zhangye Ganzhou Airport is about 24 km (15 mi) from Zhangye city. Travelers can fly from Zhangye to Beijing, Xi’an, Shanghai, Lanzhou, Chengdu, Yinchuan, and Guangzhou.

There are two railway stations in Zhangye. One is Zhangye Railway Station, serving the normal trains, and the other is Zhangye West Railway Station, which is a stop on the high-speed railway between Lanzhou and Xinjiang Province, connecting the key destinations on the Silk Road, such as Jiayuguan, Dunhuang, and Turpan. The high-speed train is now is the most popular way to get to Zhangye.

High-speed trains are also available between Xi’an and Zhangye. See this 11-Day Tour from Xi’an to Kashgar for reference.

The city of Zhangye has a long history dating back to more than 2000 years ago. It was one of the four counties in Hexi (the Western River) and the center of politics, economy, culture and diplomatic activities of every past dynasty in the north-western part of central China.

Zhangye was called "Jin Zhangye" in old times. Due to the strategic importance in its military and geographical location, Zhangye became the center of politics, economy, culture and diplomatic activities of every past dynasty in the north-western part of China.

Travel with China Highlights for a Hassle-Free Zhangye Trip

If you are interested in traveling to Zhangye and don't want the hassle of planning and public transportation, you could just contact us with your interests and requirements, and we will tailor-make your ideal Zhangye trip. Or you could see our popular itineraries below for a starting point: