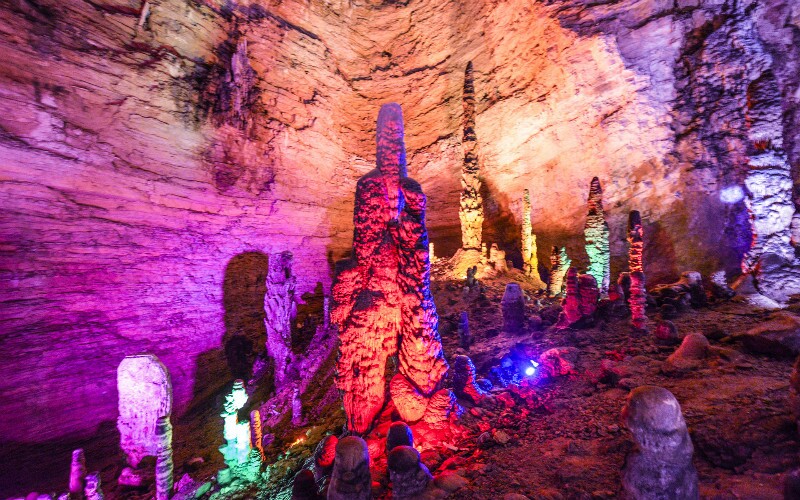 Xinghu Scenic Area consists of the Seven Star Crags Scenic Spot and the Dinghu Mountain Scenic Spot, the former being located in the midst of the city of Zhaoqing in Guangdong Province. The beauty and serenity of this place make it ideal for a peaceful excursion, and the historical landmarks also present within this scenic spot add to the pull of this "tourist magnet."

The arrangement of these seven crags in the limestone mountains matches closely that of the stars of the Big Dipper, and thus the name "Seven Star" was given to them on the basis of a legend that they were formed from the remnants of seven stars that fell out of the sky into the adjacent lake.

Xinghu means 'Star Lake', and this designation is derived from the seven crags that are found along its shores. To get a great view of the crags, one can climb the stair step sides of one of them and view the remaining six and the lake from a pavilion built on its top.

The crags are decorated with hundreds of cliff-side inscriptions dating from the Tang Dynasty (618–907), which are much studied by art historians and scientists alike. These crags have been the long-sung subject of ancient Eastern poetry, being described in many a haiku. There is also a religious significance attached to the caves in that Buddhist temples are found in and near them.

The Remainder of Xinghu Scenic Spot

Walking paths take you around the lake and wind near its mountains, cliffs, mounds, trees, and stalactite-filled caves. Sometimes you can find pieces of ink stone (used for traditional Chinese carvings), or you could purchase a pre-carved stone from a gift shop.

Buddhist and Taoist religious sculptures are scattered around the lake, and Qinyun Temple is also in the vicinity. Pools of koi carp and picnic areas make a great suggestion for a family picnic or barbecue outing. Star Lake's attractiveness and cultural importance have earned it status as a national park of China.

How Do I Get There and When Should I Go?

Zhaoqing is located about on the Xijiang River 90 km (55 mi) west of Guangzhou and can be easily reached by bus or train from that city.

Within Zhaoqing City, the Star Lake Scenic Spot is found near the city center and across from Paifang Square, between Xinghu West Road and Xinghu Avenue. It is easy to get to the scenic spot by taxi or on foot.

The tourists come all year long due to a mild climate, but one may wish to avoid the hot summer monsoon and typhoon season and the somewhat cool days of winter. Thus it is more ideal to visit in the spring of the fall.

Other Things to Do In or Near Zhaoqing

Besides a boat tour of the lake and exploration of caves and inscriptions, one should take note of Zhaoqing's ancient walls that have survived in good condition since the Song Dynasty (960–1279).

Xue Palace, the Peach Blossom Mountain Village, Swallow Rock Scenic Area, with its hundreds of odd-shaped mountains and 170 caves, and the Guangding County bamboo forest are all great stops to put on your tour list.

Finally, don't miss the "other half" of the scenic zone — Dinghu Mountain with its temple and tower.