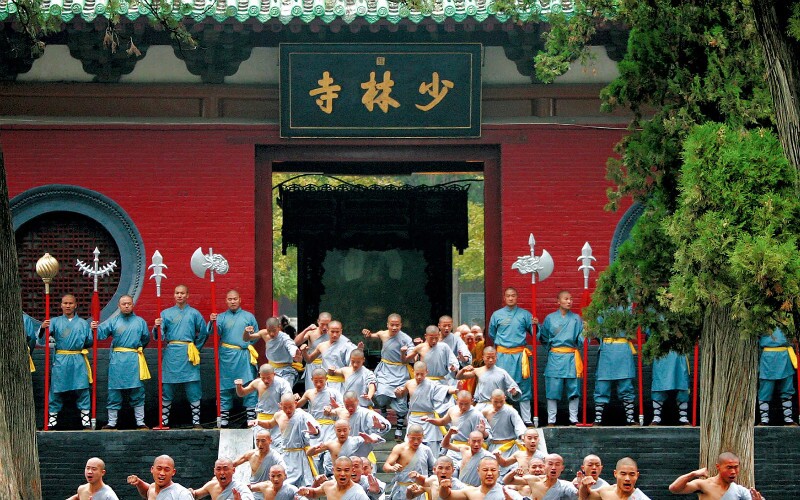 The Kung Fu TV series was very popular in the US in the 1970s, especially among children. It sparked interest in martial arts and Buddhism in the countries where it was televised. Though the history portrayed was fictional, the story of the temple being destroyed in the 19th century by the Qing Dynasty and a monk coming to the US is partially true because the temple was attacked and destroyed several times in the 20th century and monks did escape to the US where they set up a school for Shaolin. Nowadays, the temple has been reopened by the government and has become a tourist site and a UNESCO World Heritage site. The UNESCO committee recognizes both the old remaining buildings and the historical role of the temple in spreading Zen Buddhism and martial arts to Japan, Korea and other countries. It is a place where people can go to see martial arts performances, some architecture from the Ming or Qing eras, and the graves of hundreds of people in the Forest of Pagodas.

Shaolin Temple was the main temple of Shaolin Buddhism in China. It is located near the base of Songshan Mountain near Dengfeng City in Henan Province in central China. The style of Buddhism developed here centered on martial arts training and Zen meditation. The Zen way of meditation practiced by many Japanese originated here as did certain styles of martial arts in East Asian countries. It is thought that the teachers at the temple had a big influence on both the Buddhism and the martial arts in Korea and Japan, but they didn’t have as big an influence in China where there were many other religions and philosophies and martial arts styles.

Shaolin leaders left the temple in the 20th century and settled in various places and the US. The religion was repressed first by foreign countries, then by the warlords and political armies, and then by the Chinese government. People trained in those schools that they established in other places say that the martial arts and religious philosophy at the Shaolin Temple site isn’t true Shaolin teaching, but a mixture of other styles and teaching. The fighting style at the temple now is called Wushu.

Three major things to see are the martial arts performances staged near the entrance, the old architecture further up the mountain and the Forest of Pagodas. It is said that in the early 1900s, 90 percent of the buildings in the big complex were destroyed. What remains is mainly from the Ming and Qing eras.

The Pagoda Forest is a big group of about 250 stone or brick stupas that were built from about 791 AD during the Tang Dynasty to the Qing Dynasty. Though they are called pagodas, they are not really pagodas because they are not buildings meant to have people inside them. They are two to four or five storey stone or brick monuments for the people who died. The Shaolin Monastery was founded by an Indian named Batuo. He and the emperor who favored his teachings started to construct buildings at the site in 497 or so. Another Indian who is now called Tamo by Chinese came to China about the year 526. According to reports, in India he had trained hard in Mahayana Buddhist practices that required hard exercise and martial arts training as well as study and meditation. When he arrived at the Shaolin Monastery, he criticized the monks for being weak and without martial arts training. He was told to leave. He was said to have meditated in a cave for a period of time, and then he was accepted by the other monks and they started training.

In modern times, the biggest attacks came after the Boxer Rebellion when some Shaolin monks may have participated in the attack on missionaries and foreigners living in China. This Boxer Rebellion started about 1899, and then it turned into an open attack on foreign armies in conjunction with the Qing army. The attack failed, and in 1901, the Chinese Shaolin leaders and monks started to escape to other countries where they formed criminal organizations, Shaolin associations and Shaolin schools. Then in 1928, a warlord set fire to 90 percent of the buildings and destroyed many manuscripts in the library. Again during the Cultural Revolution in the 1960s, Communist students attacked the temple and flogged and paraded the five remaining monks that they found there. The Buddhist materials they found were destroyed.

However, in the last two decades, the Chinese government has established the Shaolin Temple again. Partly because of the popularity of Shaolin and Zen Buddhism in the rest of the world, many “Shaolin” schools opened around the temple. Tourists came to see the Shaolin Temple, and foreigners went to train in the schools, but the government took over the operation of the remaining martial arts school and forced the others to leave the area of the temple site. Now there is only one school operating at the temple site. However, the martial artists might not actually be practicing Shaolin Kungfu or even be Buddhists.

Near the Shaolin Temple on Songshan Mountain near Dengfeng City in Henan Province, there are other ancient religious sites, a Confucian academy called Songyang Academy and an old observatory called Gaocheng Astronomical Observatory. Many tourists think these other sites nearby are more interesting than the Shaolin Temple. The Taoist Zhongyue Temple was a center for Taoism. The Gaocheng Astronomical Observatory was built in 1276 by Kublai Khan to observe the movement of the sun and stars and to measure time.

zhengzhou Zhengzhou Travel Guide - How to Plan a Trip to Zhengzhou