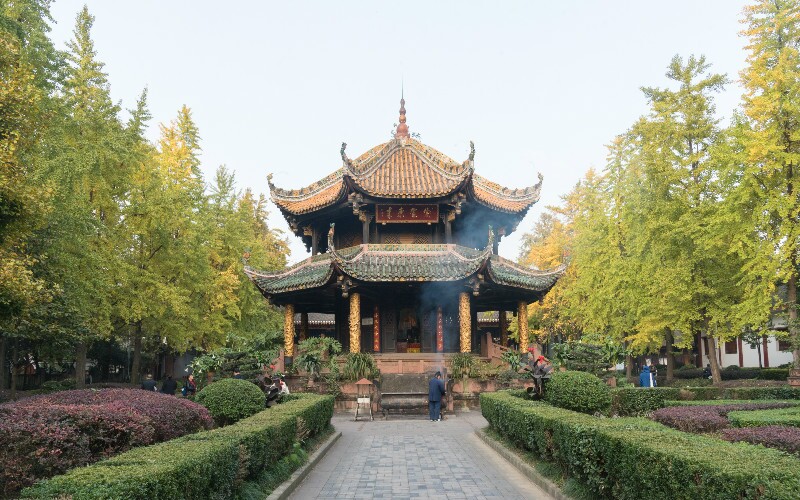 Qingyang Palace is located in the southwest suburbs of Chengdu, 3 kilometers from the city center. It was first built during the Tang Dynasty over 1000 years ago but the original buildings were ruined and destroyed over years and the currently palace was constructed during the Qing Dynasty.

One of the most grandt buildings on the Qingyang Palace ground is the Sanqing Hall. Built during the Tang Dynasty and rebuilt in the 8th year of Tongzhi's reign during the Qing Dynasty, the wooden and brick structure covers an area of over 1,600 square kilometers. Walls, windows and pillars of the building are colorfully and exquisitely decorated with carvings of flowers, two lions playing silk balls.

The name of the palace "Qingyang Palace" or Black Goat Palace is derived from one pair of black bronze goat sculptures placed in Sanqing Hall. The single-horned goat on the left is in unique shape, which looks like a sheep at a glance, but it is acutally a mythical looking creature which combines features of the 12 animal signs in Chinese Shenxiao. It has a mouse's ears, an oax's nose, a tiger's claws, a rabbit's mouth, a dragon's horn, a snake's tail, a horse's face, a goat's beard, a chicken's eyes, a dog's belly and a pig's thighs. Legends go that the two goats were incarnates of two boy servants of the Pure Emperor, and they could cure all diseases. A slight touch on certain part of the goat body will release pain and eliminate disease in the equivalant part of human body.

The most magnificent building on the Qingyang Palace ground is the Eight Trigrams Pavilion. Built on a square pedestal with a colored glazed dome, this octagonal building was erected without a nail or wedge. Surprisingly, the stucture is very stable, having successfully endured erosion of winds and rains for hundreds of years. The square pedestal and round pavilion body follows the Taoism philosophy of "the sky is round and the earth is square". The glazed dome is engraved with 81 dragons, symbolizing the 18 spirits of Laozi. In the middle of the pavilion is a vividly carved sculpture of Laozi riding on a black goat.

Qingyang Palace is the largest and oldest Taoist palace in Chengdu, and is one of the most famous Taoist palaces in China.

Pingyang Palace houses many important Taoist relics. Among all the collections, the most valuable one is undoubtedly the wooden engraviong of Dao Zang Ji Yao Engraved in the 32th years of Guangxu's regein during the Qing Dynasty, this volume contains over 130,000 two-sided wooden gravings. It is belived to be the most comprehensive Taoist scripture.

It is said that Laozi rode a black goat to the venue where the Qingyang Palace is located to teach Yinxi Taoism scripture. While during the process of the teaching, Laozi had to leave and said to Yinxi: come to meet me you in Qingyang Palace in 1000 days. After 1,000 days, Laozi came to Qingyang Palace and continued his teaching to Yinxi. During the Tang Dynasty, the emperors believed in Taoism and considered Laozi their ancestor. A palace was hence built at the site to dedicated to Laozi.

It is said two emperors of the Tang Dynasty once came to the palace to worship Laozi in the 15th day of the second lunar month, which is believed to be the birthday of Laozi. Since ever, a grand flower fair has been held in the Culture Park next door to the Pingyang Palace to celebrate the birthday of Laozi.

On the 25th day of the second lunar month, a grand flower fair is held in the Culture Park next door to the Pingyang Palace to celebrate the birth day of Laozi.