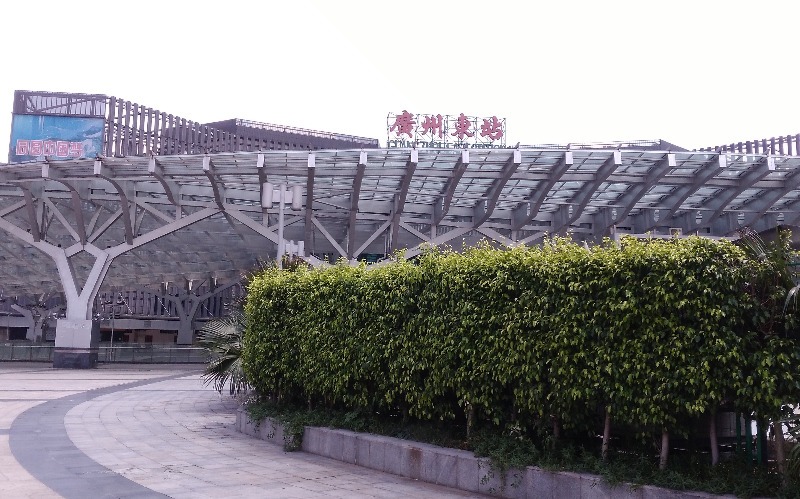 The Guangzhou East Station is a very busy and often crowded regular and high-speed train station, heavily used by tourists and foreign travelers. It is important for its central location in the Tianhe Central Business District, its high-speed line to Shenzhen, and its metro hub for two main subway lines.

It is heavily used by tourists and business people from Hong Kong who come via the Luohu Border Port. They take the high-speed train at Shenzhen Station and access the metro below to travel in the city or to go to the airport and train stations.

See the popular train travel routes (departing from Guangzhou East Station) below to get some travel ideas for planning trips in China:

Bullet trains: Of Guangzhou's four bullet train stations, its C-class train is the best for quick access to/from the Tianhe and central Guangzhou area and southern Shenzhen and Hong Kong.

The fast train to Luohu, Shenzhen is the busiest route by far and one of the busiest in the whole country.

Frequent: There are about 64 D-trains running daily to Shenzhen Railway Station from 06:30 to 22:45. There is a train every 15 to 30 minutes, and it takes about 1 hour and 12 minutes. Another 21 D-trains leave from Guangzhou Railway Station that is 10 kilometers away and stop at the station on their way to Shenzhen Station. A train departs from that station every 30 to 45 minutes, so D-class trains leave Guangzhou East for Shenzhen about every 12 minutes or so.

Efficient between Hong Kong/Shenzhen and Guangzhou: Considering the speed, convenience, flexibility, and ticket prices, taking a high-speed train to the Luohu border crossing can be the most efficient and comfortable way for a tourist to go to Hong Kong and southern Shenzhen at present. The trains leave as frequently as every 8 minutes during rush hours.

More central: The city's other bullet train line to Shenzhen starts at Guangzhou South that is on the outskirts of the city and not in the central city area most tourists and travelers go to. That line doesn't go to the Hong Kong border, but the trains go to Futian Station and Shenzhen North Station.

There are ordinary trains to Meizhou, Shantou, Xiamen, Beijing, Harbin, Changchun, Chengdu and other cities. By transfering, tourists can go to hundreds of cities.

Note about the train classes: The recommended trains from this station are mainly the D-class fast trains and the T-class (regular) and Z-class (direct) trains. The D-class (also called C for this route, meaning intercity) travel at about 250 kph. The Z, T, and K trains travel at 160 kph, 140 kph, and 120 kph (75 mph) respectively. However, the K trains are often dirty, stop more often and for longer periods, and theft is a problem.

There is a lack of English signage, and the station sprawls, so add about 15 minutes extra travel time for orientation if you are using this station for the first time. There are English-speaking staff readily available to help foreigners.

Conventional trains: It is recommended that you arrive at the station about an hour before departure time if you have tickets and about two hours before if you intend to get a ticket there since waiting in line might take an hour on busy days.

Safety: Keep your luggage and bags closed and close to you. In both the crowds in the station and on the regular trains, pickpocketing is a problem.

Generally, unless you know the city bus routes, the best way to go to and from the station is by taxi or subway. Otherwise, if you are unused to riding Chinese buses, you could get on the wrong bus or miss your stop. Guangzhou has four train stations. Be sure about which one you are going to and explain to your driver clearly about which station you are going to.

It is best to catch taxis at the main exits near at the front square. There are people all around the area on the look-out for unsuspecting non-Chinese travelers offering rides, baggage handling, etc, and they may do crimes like giving counterfeit money or scams. Also, they will probably charge you much more than do these in the plaza.

Legit taxis will generally pull up to the door in this designated taxi area where there may also be police and/or guards watching.

Subway to Shenzhen's Other Railway Stations

This station is only about 10 kilometers away, and it would seem that going by subway is quick and fast, but it isn't. Journey time by metro is about 40 minutes (4 RMB). Taking the taxi is faster and less stressful.

Just take the bullet train. The journey time is approximately 70 minutes, and when you get out onto Shenzhen Station's main plaza, walk south 100 meters to the Luohu / Lo Wu Border Crossing entrance. The East Rail Line at Lo Wu Station on the Hong Kong side is especially convenient for metro travel around Hong Kong. See Border Crossings in Shenzhen/Hong Kong>>

Metro Lines 1 and 3 to the Main Attractions

To Zhujiang New City: The subway station next to the CTF Finance Tower and the Guangzhou IFC Tower that are two of the tallest in the world.

You could book tickets in the station, at the other train stations, or at many other ticket selling locations in the city. Be clear about which train station you want to use. Foreigners who don't speak Chinese or are unfamiliar with the process might prefer using a tour agency. You'll need your passport. See How to Buy Tickets in China>>

High-speed train counters: Past Gate 1 on the first floor, you'll find the ticket counters and automated ticket machines. There may be even a fifteen minute line during rush hours. It is one of the heaviest used intercity routes, but with trains leaving every few minutes during rush hours, waiting is minimal.

Conventional train ticket counters: Passengers taking slow trains should go to the ticket counters on the second floor or on the far end of the station building.