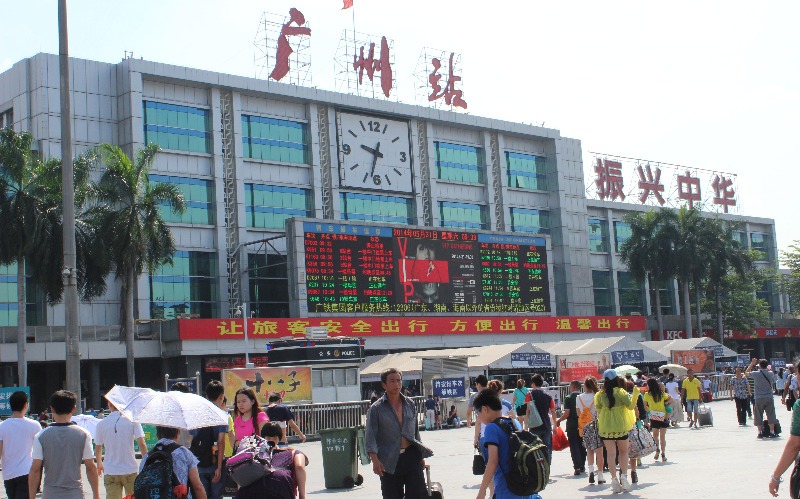 Guangzhou Train Station is one of the biggest stations in China and useful for metro travel, long distance slow travel, and going quickly to Hong Kong/Shenzhen. It is a big old station in the west central city area.

Usefulness: The dozens of slow regular trains allow you to go to places not serviced by bullet trains (most of the country still) and travel economically and see the country. Guangzhou Railway Station serves non-bullet trains to major cities including Beijing, Shanghai, Xi'an, Chengdu and Hangzhou. Some high-speed trains to Shenzhen also depart from here.

Guangzhou Railway Station has a metro interchange for lines 2 and 5 as well.

These popular train travel routes from Guangzhou Station will give you some travel ideas for planning trips around China:

Bullet trains: There are four bullet train stations in Guangzhou, and this station's C-class train can work for quick access to/from the west central Guangzhou area and the southern part of Shenzhen and Hong Kong.

Perhaps useful between Hong Kong/Shenzhen and Yuexiu District: Taking this C-class high speed train to/from the Luohu border crossing could be the most efficient and comfortable way for a tourist to go from the Yuexiu area or west and north of Yuexiu to Hong Kong and southern Shenzhen at present considering the speed, convenience, flexibility, and ticket prices. But you have to time your departure well. See Border Crossings in Shenzhen/Hong Kong>>

More central than Guangzhou South: The city's other bullet train line to Shenzhen starts at Guangzhou South and goes to Shenzhen North and Futian Station in northern Shenzhen. That train takes about 60 percent less time to travel (33 minutes) and puts your closer to Futian financial district and Bao'an Airport. But it is on the outskirts of Guangzhou and not in the central city area most tourists and travelers go to. However, there is a direct metro line from Shenzhen North to Futian Border Crosspoint.

C-class bullet trains: This line opened in 2016 and is part of a major high speed network in Guangzhou. The line goes to/from the station to 10 other stations and ends at Zhaoqing. Some trains only stop at four or five stations. These are industrial areas few tourists go to.

Slow conventional: The station was created to be a major hub for conventional train lines, and this is still the popular long-distance travel method of most Chinese.

Note about the train classes: The recommended trains from this station are the C-class bullet trains and the T-class (express) and Z-class (direct) trains. The K trains are often dirty, stop more often and for longer periods, and theft is a problem.

Note on alternative long-distance bullet train routes: Instead of these slow trains, from Guangzhou South, there are bullet trains you can take to many cities west, north and along the east coast of China such as Guilin, Yangshuo, Macau/Zhuhai, Nanning, Guiyang, Xi'an, Wuhan, Beijing, Changsha, Shanghai, Hangzhou and along the eastern coast. So now you have a faster choice.

A massive and less convenient station: This old station has a large front plaza and an overall area of 377,600 square meters (4,000,000 square feet) with not enough convenient exits. The transportation facilities to the area including the metro station exits are not as quick and easy to access as Guangzhou South and Guangzhou East. Also the place is so big that getting around it takes longer and is tiring.

It is disorientating for first-timers, especially if you don't speak Chinese and read Chinese signs. It isn't really set up to handle foreign travelers as well as the other two that are more modern. Crime is also more of a problem.

Big clock: A big clock in front identifies the building.

Delivery: Outside the station building at the east corner, you will find a China Railway Express office (中铁快运) where you can have your large luggage delivered to destinations at a reasonable price.

Storage: By the side of the ticketing counters, they have a temporary luggage deposit desk. The price starts at 5 RMB/piece for a day. Overnight costs extra.

Portage: Staffers in red caps will help you carry large luggage onto the train, 10 RMB/piece.

Generally, unless you know the city bus routes, the best way to go to and from the station by public transportation is by taxi or subway. If you are unused to riding Chinese buses, you could easily get on the wrong bus or miss your stop.

Guangzhou has four train stations. Be sure about which one you are going to and explain to your driver clearly about which station to go to.

Catch taxis at the taxi stand in the front plaza on the first floor. They are to the left of the central doors as you exit next to the bus parking station on the east side of the plaza. There are people all around the area on the look-out for unsuspecting foreigners in order to do crimes such as giving counterfeit money or scams. They may offer rides, baggage handling, etc. They might charge you much more than do these at the exit.

Legit taxis will generally pull up to this designated taxi area where there may also be police and/or guards watching. Guangzhou's taxi scammers are especially notorious.

Subway to Guangzhou's Other Railway Stations

The metro exits are on the southwest side of the plaza.

Note that these lines get packed from about 7:30 am to 9:00 am and 5:00 pm to 7:00 pm. The trip might take 45 minutes or more including transfer, and you might have to push your way on board. With baggage, this is more difficult to do.

Bus to Guangzhou East: It be reached directly by taking bus 271 from Guangzhou Railway Station within one hour.

Metro Lines 2 and 5 to the Main Attractions

To Zhujiang New City: The subway station is next to the CTF Finance Tower and the Guangzhou IFC Tower that are two of the tallest in the world.

To Chen Ancestral Academy: It is one of the top historical sites. Our Guangzhou and Shenzhen historical and cultural tour provides private transport and you can modify the itinerary to go to other places.

You can buy train tickets in the station, at other stations, at city train ticket booths, or online. Be clear about which train station you want to use. You might prefer using a tour agency like us. See How to Buy Tickets in China>>

Buying Tickets with Us

For booking, go to https://www.chinahighlights.com/china-trains/, choose your trains, and we will do the rest!