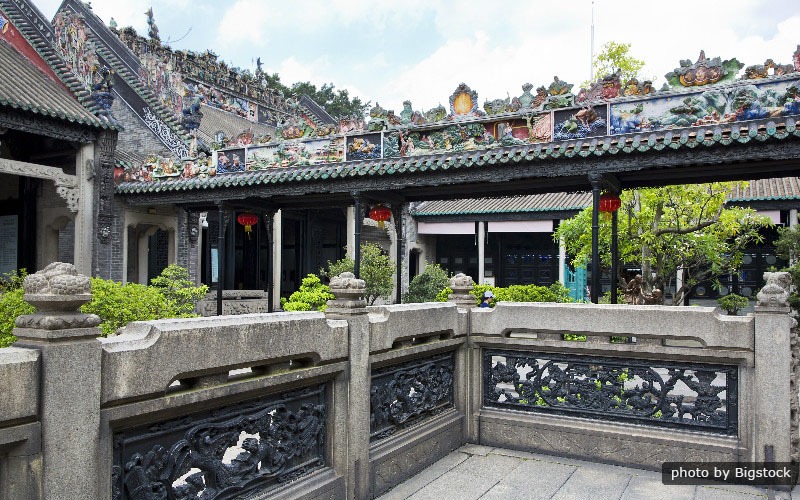 The Chen Clan Ancestral Hall (also known as the Chen Clan Academy, for those who's surname is Chen), which now houses the Guangdong Folk Art Museum, is a great stop on your tour of Guangzhou for its history and architecture.

It was originally a space for students training for the Confucian Imperial Examinations, built by two overseas Chinese in America returning to Guangzhou.

The Chen Clan Ancestral Hall (陈家祠, Chén Jiā Cí) was set up by two Chinese-Americans who wanted students from the Chen family to have an academy in Guangzhou as they were preparing for their Confucian Imperial Examinations. It was built just before the end of the Qing era between 1890 and 1894, with the two founders whose surname was Chen, Chen Ruinan and Chen Zhaonan, rallying support from all over Guangdong. It is said that money was contributed by 72 Chen families.

Because the Confucian Imperial Examinations were extremely difficult to pass, the shrine contained dormitories and support for students to study for their examination. Passing this would help them gain a stable official position within the Qing government.

However, because the Qing Dynasty was failing at the time of construction, students here probably knew that they wouldn't have much of a future in government. When the imperial examinations were eventually abolished in 1905, the building was turned into a practical school for Chen clan students.

The Building of the Chen Clan Ancestral Hall

The Chen Clan Ancestral Hall has a very traditional look to it, and it is huge. It is interesting that the structure was built in such a traditional manner at a time when building going up in commercial cities in the south often had a Western architectural style.

The building features intricate wood carvings inside, and polished wooden rafters. The building was also a shrine to worship the Chen family ancestors, and it looks much like a southern Chinese temple shrine.

In 1957 the Guangzhou city government took over care of the building, and in 1959 it became a museum, and the remaining artwork and traditional architecture and decorations were deemed to be so valuable that in 1988 it was named a National Key Cultural Heritage Protection Unit by the State Council of China.

Currently it is a Chinese folk art museum, and one of Guangzhou's best tourist highlights. The exhibits include a variety of folk arts and crafts, as well as interesting old maps and family trees, making the visit worth it for both the architecture and the exhibit.

The building covers 13,200 square meters or 142,000 square feet. It has 19 buildings with nine halls and six courtyards that are connected in a symmetric pattern. On the main axis are the Main Entrance (头门), the Assembly Hall, and the Rear Hall (后堂). These three main buildings are separated by courtyards.

The Chen Clan Ancestral Hall is a traditional Chinese academic complex. It is incredible how much intricate artwork went into everything from the roof that has 11 ceramic ridge crests that look like dragons lying on the roof, to the iron castings of the stone handrails.

The iron castings are engraved with delicate designs and pictures. There are four different themes to the pictures called "Qilin and the Phoenix," "Dragons and Orbs", "The Three Goats", and "Goldfish in a Pond". A lot of highly skilled craftsmen must have put a lot of work into the artwork and decorations, and construction was undoubtedly expensive.

The museum is open from 8.30am until 5.30pm every day, and an average visit takes 2-3 hours. Best times to visit are off-peak, so not during Chinese public holidays.

The museum makes a great break from work for those visiting Guangzhou for the Canton Fair!

There are so many other sights to explore in Guangzhou, including the popular Guangzhou Chimelong Holiday Resort which features a safari park, a zoo, a circus, an amusement park, a water park, a golf center, and a resort all in one. This combination makes it one of a kind in Asia, but also throughout the world.

In the city center of Guangzhou you absolutely must visit Canton Tower, the second tallest building in China for an incredible view, and there is also Shamian Island, a foreign settlement built on this island in the Pearl River in the 19th and 20th centuries.

For those looking to escape into nature, Guangzhou is close to Baiyun Mountain (White Cloud Mountain), the perfect place to stretch your legs and clear your mind.

We can help you customize a tour to visit the best of Guangzhou if you know which sights you want to see, or just take a look at our Guangzhou Tours.