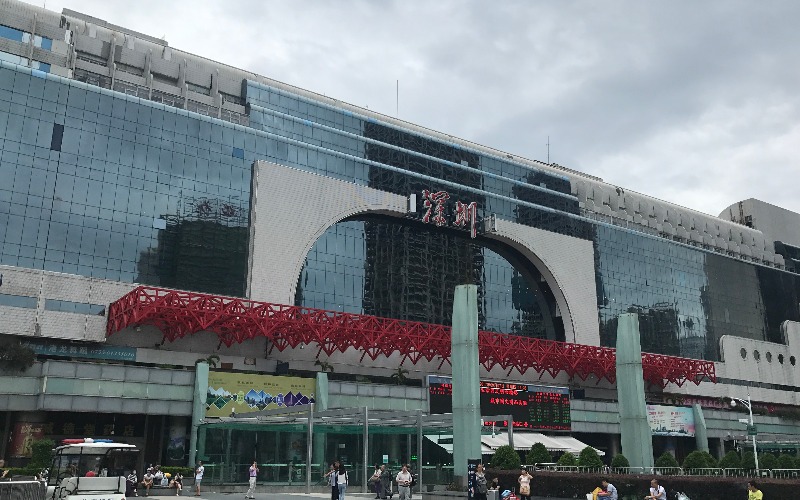 The large station is mainly for conventional slow trains, and it is useful for travelers mainly for rail access to the Hong Kong border, its facilities, restaurants, bullet train access to Guangzhou, and metro, bus, and taxi stations.

Shenzhen Station has the Guangzhou to Shenzhen bullet train and several overnight regular train routes that tourists might find useful.

Shenzhen Station offers the best fast access to central Guangzhou: Shenzhen's other bullet train lines don't start at the border, and they don't go to the central / Tianhe area's that most travelers want to go to. Considering the speed, convenience, flexibility, and ticket prices, it is the most efficient/comfortable way from Hong Kong to Guangzhou for tourists at present.

Trains leave as frequently as every 5 minutes during rush hours.

However, for tourists who would enjoy a leisurely slow train ride and want to sleep in a bunk, riding the station's conventional trains is a way to get to know the people and see the scenery. There are T-trains to Shanghai, Beijing, etc., and a Z-train (express) to Wuhan.

*"+1" means that the train arrives the next day.

There is English signage and some English-speaking staff readily available to help foreigners get tickets and find the departure waiting rooms.

Conventional trains: Despite of its easy accessibility from every corner of the city, ticket-checking and waiting often takes a long time, so we strongly suggest you be at the station as least 2 hours prior to your departure time if you're taking a conventional train.

Click for a general location map for the stations of Shenzhen. Shenzhen Railway Station is adjacent to the Shenzhen Bus Station and the Luohu Border Crossing.

Two squares: The main east square is much bigger than the west square. Both have taxis, long distance buses, and city buses. All these transportation modes in easy walking distance makes the station convenient for travelers if you know where these facilities are and how to navigate around the area. It is the lack of English signage that makes the place confusing for foreigners. So study the layout before you go.

Access via the east square, west, square, and by the broad entrance in front of the large Shangri La Hotel that is directly north of the station.

The metro station is in an especially convenient place under the plaza. It is only about 30 meters away from the train station.

The Border Crossing Building is directly south of the main east plaza about 50 meters from Exit A of the metro station. This building is the southern boundary of the whole station area.

Big mall: There is a big mall building called Luohu Shang Ye Cheng (商业城) with shops and tailor shops across the broad east plaza from the building. There is a police station in it. It is the eastern side of the plaza, and under it is a bus station.

Long distance bus stations: There are two. One is under the mall in the east plaza, and one is in the southwest corner of the train station called Qiaoshe Coach Station. The former is more convenient and has nicer buses that cost more. Some go direct to places in Guangzhou, and if you want to go to specific places there and get on the right bus, you might find this more convenient than other methods. The latter is for the cheapest long distance bed buses. Some go even to Guilin and Yangshuo and these are used mainly by workers or Chinese now that bullet train travel is available.

City bus stations: There are two of these as well. The biggest is in the eastern plaza and to the north of the mall building. There are a score of convenient routes that go all over the city. The smaller is in the western square area adjacent to the Qiaoshe Station.

Taxi waiting areas: The main one and the recommended one for foreign tourists is to the north of the mall. Taxis can also be caught in the Qiaoshe square area or in the street on the northern side of the plaza near the Shangri La Hotel.Lou

There are three floors and an underground level:

Confusing: Be aware that although it is a border station, English signage is limited, and the station sprawls. First-timers will likely find the station confusing and hard to navigate around in. Even the Immigration entrance is confusing to navigate, especially if you don't speak Chinese. This is why it is good to study this station's layout first before you go.

You'll find the Shenzhen Metro Line 1, Luohu Station beneath the big east square. If you are coming out of the Cross Border Building, the down escalators of Exit A are in front of you. When you're downstairs, you'll find automatic ticket dispensing machines where you can buy tickets.

This metro station also sprawls, so it is good to know the exit layout:

Facilities and Services at the Station

Left Luggage Office: The left luggage room is located in the waiting area of 3F. It usually charges about 25 RMB per day depending on the size of the luggage.

LED signs: Both outside and inside the station, there are big LED screens that offer detailed information about the trains such as departure times.

Information desks: There are two places to go if you have questions or need help on 2F and 1F.

Luggage and package services: By the right side of the station, you will find a China Railway Express Office (中铁快运) where you can have your large luggage delivered to predesignated destinations at a reasonable price.

Hotels, restaurants, and shops: You'll find a plethora of these all around but inside and outside the station area. Opinions differ about the shops and stores. Many say avoid the shops and the big mall in the station in front of the border crossing. Others claim to get excellent prices and workmanship on professional tailoring. It probably comes down to your haggling skills and whether you find a good store owner and/or tailor.

There are both Western and Chinese fast food restaurants in the train station building such as McDonald's. You'll find much better prices if you walk to small restaurants on the other side of the Shangri-La.

Generally, unless you know the city bus routes, the best way to go to and from the station by public transportation is by taxi or subway. Otherwise, if you are unused to riding Chinese buses, you could get on the wrong bus or miss your stop. Shenzhen has six train stations. Be sure about which of the six train stations you are going to and explain to your driver clearly about which station you are going to.

Shenzhen Station is in Luohu District, 17 kilometers (11 miles) from Shenzhen North bullet train station and 40 kilometers (25 miles) from Bao'an International Airport. The Luohu Border Checkpoint is only about 100 meters south.

Getting to the west square: On the southwest side of the plaza is a station exit to the Qiaoshe Station area. But it is difficult to find because of few signs. You can’t see it from the plaza. You must go to the southeast corner and find stairs or an escalator that leads to an overpass and walk some distance to the descending stairs. Mainly locals use that bus station.

It is best to catch taxis in the big east plaza. There are people all around the area on the look-out for unsuspecting non-Chinese travelers offering rides, baggage handling, etc, and they may do crimes like giving counterfeit money or scams. Also, they will probably charge you much more than do these in the plaza.

Legit taxis will generally wait on the east side plaza area where there may also be police and/or guards watching.

Subway to Shenzhen's Other Railway Stations

Futian Station Station is important since it is on the future bullet train line to Beijing and Hong Kong (2018) and a major metro hub. It is the second largest underground metro/train station in the world. As of 2016, there are bullet trains running between it and Guangzhou South.

At Shenzhen Station you are at a convenient, but busy, border with HK: the Luohu / Lo Wu Border Crossing. The East Rail Line at Lo Wu Station on the Hong Kong side is especially convenient for metro travel.

Metro Line 1 to the Main Attractions

Window of the World is a major theme park in Shenzhen adjacent to others.

To Window of the World: The subway station is directly in front of the theme park.

To Sea World (a popular restaurant and shopping area):

You could book tickets in the station, at the other train stations, or at many other ticket selling locations in the city. Be clear about which train station you want to use. Foreigners who don't speak Chinese or are unfamiliar with the process might prefer using a tour agency. You'll need your passport. See How to Buy Tickets in China>>

High speed train counters: At the counters on the east side of 1F, you can expect even a fifteen minute line during rush hours for the high speed train. It is one of the heaviest used intercity routes, but with trains leaving every 5 minutes, waiting is minimal.

The CRH train’s ticket office and waiting rooms are between the conventional long-distance train station and the border check-point building. It might be difficult to find. From the front of the conventional train station, walk about 100 meters or so south along the eastern side of the plaza on the ground level. The ticket windows are in a small area, and the waiting rooms are adjacent to it.

Conventional train ticket counters: Passengers taking slow trains should go to the ticket counters at the north of the station building. It is recommended that you arrive there 1 hour in advance or even an hour and a half during busy travel times.