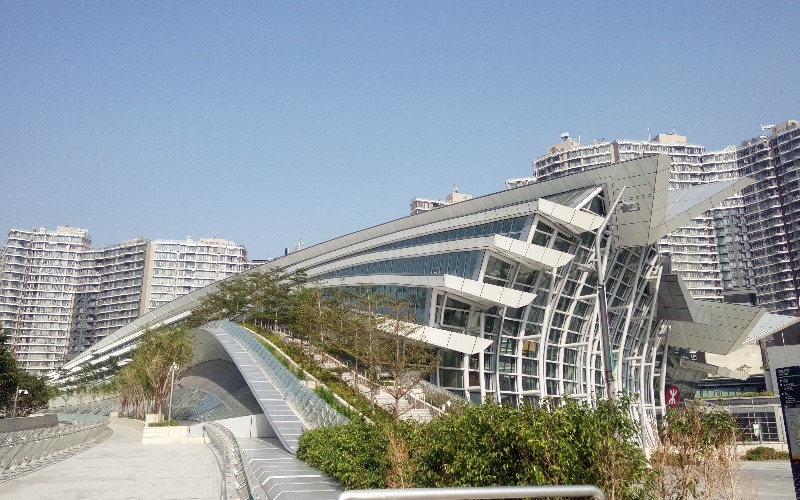 West Kowloon Station is the south terminus of the Guangzhou–Shenzhen–Hong Kong Express Rail Link (XRL). This station is in West Kowloon and adjacent to metro stations of Kowloon and Austin. So it is now the major travel hub in the Kowloon area for both China travel and internal transportation.

It is the world's largest underground train station and has won international design awards. For travelers, it is now the fastest way to travel between Hong Kong and much of China within an easy day's travel time. Those wishing convenient travel to and from southeastern China and international locations can now utilize the bullet train, the MTR, and Kong Kong International Airport.

The 5 floors are the surface level lobby at the ground floor (G1), the ticketing hall (B1), the arrival concourse (B2), the departure concourse (B3) and the platform level (B4).

Special Features and Facilities of Interest for Travelers

The huge train station has many facilities good for tourists and travelers. There is direct access to the Elements Mall that is one of Hong Kong's Best Luxury Malls, direct access to the West Kowloon Cultural District and Xiqu Centre, an open plaza city park in front of the building, and a rooftop promenade with great Victoria Harbor and skyline views where you can watch the Symphony of Lights or fireworks in the evening.

You'll also find convenient restaurants, fast food, and shop services on level B1. But for better dining and shopping, we suggest you walk 9 minutes to the Elements Mall via the passageway. For Chinese opera, tea and art, you could use the pedestrian passageway to Xiqu Centre outside of Austin Station.

Artistic touches include angled pillars and the streamlined roof that features 4,000 pieces of glass and more than 16,000 pieces of aluminum sheeting with irregular shapes. Tourists will enjoy the airport-like seating arrangements.

Awards: In 2010, the designers won the "Cityscape Awards for Architecture" of the Emerging Markets of Tourism, Travel & Transport Future Awards and the "Best Future Project ─ Infrastructure" of the World Architecture Festival Awards.

You can now travel to stations in 44 cities in Mainland China, and more cities will be available in the future.

West Kowloon Station embarks 127 pairs of high-speed trains to Mainland China every day. These include 114 pairs of short-distance trains to Futian, Shenzhen North and Guangzhou that leave at an average interval of 25 minutes, 15 minutes and 30 minutes respectively. Thirteen pairs of long-distance trains run to major cities outside Guangdong Province.

Information for the most popular Guangdong regional bullet trains is below.

Information about these popular long-distance high-speed trains is below.

Booking tickets online with a travel agency like China Highlights is the fastest and most convenient way.

West Kowloon Station has the Hong Kong Port Area and Mainland Port Area on B2 and B3 floors, respectively. Passengers traveling between Hong Kong and Mainland China by high-speed trains can go through adjacent entry and exit immigration. This new arrangement saves a lot of time and hassle.

The ticket collecting and purchasing office for China-bound trains is in the Ticket Hall on level B1. Once you have the tickets, pass through the ticket examinations and security scanner checks, and then go down to the Departure Hall on level B3 via the escalators.

On B3, first go through Hong Kong Immigration Departure Clearance, have your passport checked, and then pass through the Customs clearance area, walk down a long corridor, and walk into the China Immigration Check Point where you'll wait in line for visa and passport checking. Then your go through the Customs Procedures area, and then wait for the gates to the train platform to open.

Once opened, departing passengers should go down to the B4 Platform on the escalators, and then find and enter your passenger car as indicated on your ticket.

Information board for trains departing from Hong Kong

The passengers who are arriving will disembark their trains at the B4 Platform. Go up to level B2 via the escalators, and then undergo the passport checking at the Mainland Departure Clearance area. Go through the adjacent China Customs area and walk down the passageway. At Hong Kong Immigration, they will check your passport and visa status. Undergo the Hong Kong Quarantine check, if any, pass through Hong Kong Customs, and then have your ticket checked before exiting the station.

The following three ways of transportation conveniently get you to and from West Kowloon Station.

Through the MTR, you can easily transit from the West Kowloon Station to other regions of Hong Kong:

For information about suggested touring routes using the MTR for transportation, see Touring Hong Kong by MTR Subway and Tram.

Taxi stands are available on the ground floor, B1 and B2 floors. The local taxi service is of comparatively good quality and can take you to Tsim Sha Tsui within two minutes.

At present, we suggest these two ways for rapid public transit. Quicker bus routes will probably open in the future.

By MTR subway: Take the Airport Express train to Kowloon Station, take the C1 Exit, and then enter the station via the footbridge or underpass. The travel time is about 25 minutes, and the ticket price is about 100 HKD or 13 USD for a single trip.

By airport bus: Take bus A12 to the Western Harbour Crossing Toll Plaza, and then walk to the nearby Austin Road West to take bus 215X to get there. The duration is about 45 minutes, and the ticket price is about 50 HKD or 7.40 USD.

The ICC Tower on the harbor houses the luxury Elements Mall. It is about 11 minutes away from the station.

West Kowloon Station is about 6 minutes via MTR from the well known Tsim Sha Tsui attractions including Harbour City Mall, the Avenue of Stars, the Star Ferry, the Symphony of Lights, Nathan Road and lots of other popular places near Victoria Harbour.

Recommended scenic walking route: Instead of walking along tunnels to take the MTR, a scenic 20 minute or so walk will put you on Nathan Road near Kowloon Park, and you can walk down to the Victoria Harbor front.

Right around the station, there is the ICC Tower and Elements Mall and the new Xiqu Centre in the West Kowloon Cultural District.

Here are suggested touring plans for Hong Kong to help you save time as you see the best in Hong Kong according to your price budget.

Private Transport: Instead of using taxis, we could arrange private transport for your tour.

All our tours are modifiable. You can mix and match tours or design your own. Contact us. We reply in 24 hours.