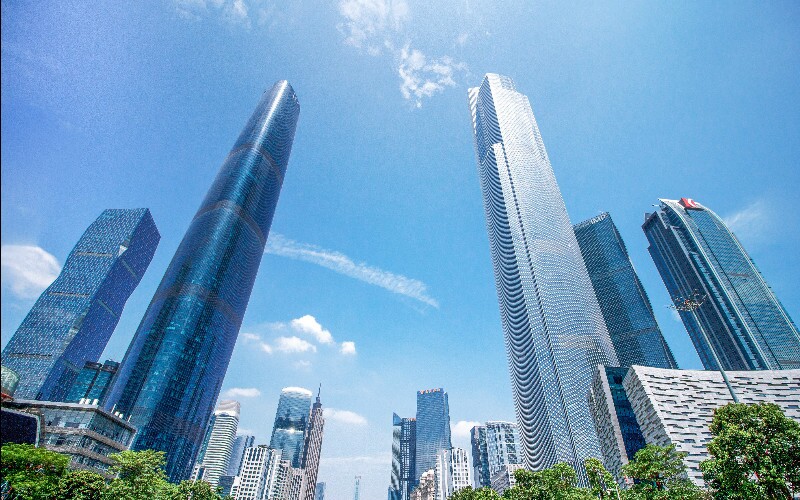 The new supertall CTF (Chow Tai Fook 周大福) Finance Centre Tower will be finished in 2016 in the downtown Tianhe area in Guangzhou.  Like the other supertall buildings built in China since 2010, the top floors contain an observation deck and hotel.

It is the world's 7th tallest building. There is currently a megatall building spree happening around the world, so by 2018, the building will probably be much lower down the list of tall buildings in the world.

One of the world's highest observation decks: Tourists can enjoy the view from the deck on the 111th floor. It is only a little lower than the Burj Khalifa's 555 meter deck. It is about one hundred meters higher than the one on the Guangzhou IFC Tower.

Tallest in Guangzhou: The building dwarfs the 439 meter Guangzhou ICF Tower that was Guangzhou's tallest building. It will be about 38 meters taller than the Shanghai World Financial Center and the Taipei 101 too.

One of the world's tallest hotels: Some of our tourists might enjoy a stay here at the hotel in the top floors. As of 2016, only several such as the the Ritz Carlton in the ICC Tower in Hong Kong that is at 484 meters (1,587ft) is higher. It is higher than Shanghai Tower's J Hotel.

Big ritzy mall: Along with the main tower, a ground level and underground mall and metro station interchange is being built that is designed to make the mall get heavy traffic.

The complex was designed by Kohn Pedersen Fox. Construction of the main tower began in 2010. It was meant to complement the Guangzhou IFC Tower. It is also called Dongta (广州东塔, East Tower), and the other tower is called West Tower.

Part of the Downtown Skyscraper Cluster

The new CTF stands out as one of two supertall towers in Tianhe in downtown Guangzhou. The other tower is the Guangzhou IFC Tower that is about 200 meters away. With the Canton Tower, the three towers dominate the Tianhe area.

The building is built according to a recent innovation in very high skyscraper design. Like the rest of the world's tallest buildings that were built in the last several years, instead of having a simple steel girder framework for a skeleton, it has a thick concrete core. Along with the thick central core, there are 8 super-columns, two at each side, that reinforce the framework. It is a showcase of 21st century engineering.

The advantage to this design is that it allows for more window space on the sides. It is also meant to be stronger and earthquake resistant. Building in Guangzhou is difficult because the the city is sometimes hit by typhoons.

Discover the New Guangzhou Center for Yourself

The Canton Fair is held at Pazhou twice a year

The most famous visitor highlight is the twice yearly Canton Fair that is China's biggest trade fair and one of the biggest in the world. It is held in April and October each year and attracts people from all over the world.