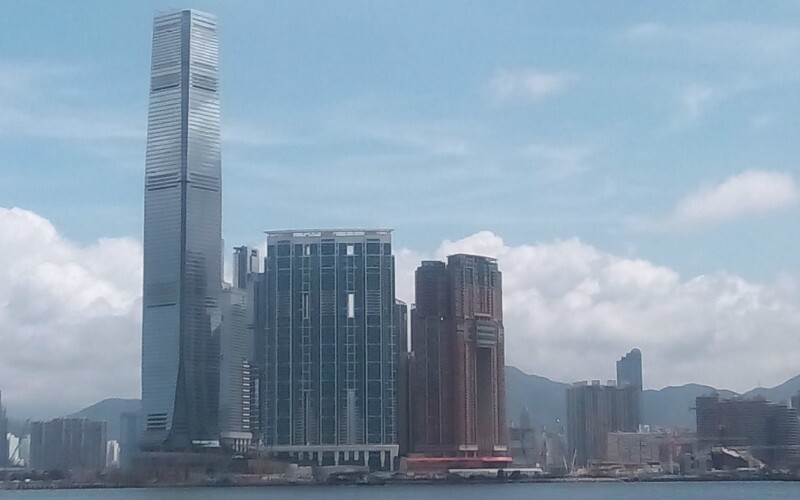 The ICC Tower is important for tourists. It has the highest observatory, one of the plushest of Hong Kong's malls, and has good MTR subway transportation. These reasons and more make it a tourist highlight in Hong Kong.

The ICC Tower and Elements Mall stands out among the others

The International Commerce Center (ICC) is part of a planned second financial district in the city. It's an attraction for both tourists and business people.

This is a notable record-breaking building. It is innovative in that it contains residential, commercial and business facilities and a world-class transportation system. It is part of an efficient self-contained community called Union Square.

The ICC Tower is a tourist attraction. The building and the adjacent mall under it are designed for visitors and tourists. Tourists are interested in the view from the top, the Elements Mall, the light display, staying at the Ritz Carlton Hotel, and dining at the restaurants.

The mall in the bottom floors is one of the top five luxury malls and it is in a strategic location. It isn't fully developed yet because the new central business district area is still under construction. As of now, it mainly attracts wealthy shoppers from the Union Square area, some tourists and sightseers, and people passing to and from the Kowloon Station.

The construction around it discourages pedestrian traffic. Customers seem sparser than the busier malls. When the construction projects are completed, it should go up in rank in popularity and ritziness. By the end of the decade, a bullet train line from Guangzhou may connect with the MTR station below and greatly increase visitors.

Visitors usually enjoy it for its central location, open feel, blend of shops, variety of restaurants, and entertainment areas. It was built by the same company that built the IFC Mall and towers and has the same comfortable feel.

So you won't see crowds of people, but you'll see high-priced jewelry showcased in the shop windows and other things beyond the budget of most people. The mall measures about a million square feet. It is quite big and luxurious.

Unlike the IFC Mall across the bay that has the reputation for being Hong Kong's "ritziest mall", you'll see no fast-food chain restaurants. The international restaurants in the mall are all quality restaurants.

The Elements Mall gets its name from the 5 elements of Chinese Daoist philosophy: wood, water, metal, fire, earth. There are five sections with these names in the mall that each sell different kinds of goods or services that somehow match these ideas.

The Fire section has Hong Kong's best theater. There are 12 screens, and the theater seats 1,600 people. It is equipped with excellent audio equipment. Perhaps it was put in the Fire section because people get excited in there.

To show how upper-class the Elements Mall is, the Three Sixty supermarket is an organic and natural food supermarket. It is unusual in Asia. There is even organic milk, organic coffee, and organic hamburgers. The supermarket is in the Wood section.

Sky 100 is an observation floor with a 360 degree view. You can see the city from the highest observation deck in Hong Kong on the 100th floor of the building. They present an interactive media presentation about the ICC Tower, Hong Kong, and Hong Kong's history.

There are telescopes and a photography booth. Sofas allow people to relax for a while watching the city and the harbor below. There are beverage machines. The ticket price is about 168 HKD (21.70 USD) except for Sunday when it is 220 HKD. People can stay there until 9 or 10 pm when it closes.

The elevator can shoot up in 60 seconds, and people enjoy the quick ride.

The 101st and 102nd floors have the best restaurants. They serve mainly visitors, business people, and people staying at the Ritz Carlton above. Dragon Seal for Chinese food and Inayaka for Japanese food are on 101.

In the Elements Mall, the popular dim sum restaurant Lei Garden received one star for 2016.

The top floor has a lounge and swimming pool called Ozone that is the highest such hotel facility in the world. The cheapest rooms are deluxe rooms with prices that start at least 4,000 HKD (500 USD) per night.

The Avenue of Stars

The building now has the best light display in the city. The light display is an achievement. Hong Kong is known for interesting light displays that tourists can watch most evenings from the Avenue of Stars.

The building is primarily a business and residential complex for the new financial district for Hong Kong that is under development. The ICC Tower is a part of Union Square that attracts wealthy people and business people because they can work, live and shop in the same complex. Its transportation system may be the best in Hong Kong when the bullet train line opens.

The ICC Tower is in a strategic location. It is over the new interchange point for major rapid transit systems and is close to the airport.

Services for the CBD are being consolidated in innovative ways for time and money-saving efficiency. For wealthy financiers and businessmen, saving time, convenience, and quick travel to meetings is very important. It is important to be able to travel quickly and to stay at a place where a lot of colleagues and customers live.

Residential and Business Facilities Built Together

The ICC Tower and the Union Square complex has an advantage because the residential buildings in Union Square and the new Ritz Carlton are right next to the business offices of major international corporations.

Credit Suisse, Deutsche Bank, and other major corporations have offices in the tower. The restaurants and the luxury mall areas are convenient places to meet people and have a meal.

The ICC Tower may have the best regional and international travel system in the world once it is finished, perhaps by 2019, and other planned mass transit projects are completed. People in the complex will be able to travel quickly in the city, in the region, and internationally.

The tower's regional transportation system is also an advantage compared to Central District's. A line being constructed to link Guangzhou, Shenzhen and Hong Kong. People may be able to travel to the Guangzhou South Station in less than an hour. The line will link hundreds of millions for quick travel to the airport and the ICC Tower.

From the Guangzhou South Station, train travel to Wuhan and many other cities further inland would take only a few hours. These areas in southeastern and central China are one of the world's biggest industrial regions and population centers. So the rail line links together international business people and the industries.

New tunnels are being built through the mountains to Shenzhen. The only Hong Kong station for the line called West Kowloon Station is being built next to the tower.

Travel to Shenzhen and the rest of China will be easier and quicker for those staying at the tower than from anywhere else in Hong Kong. The trains along the Hong Kong section of this rail line are expected to travel 200 km/hour.

Travel to the Hong Kong International Airport is convenient because the special Airport Express MTR station is basically "in house" under the ICC Tower. It leaves frequently and whisks people to the airport in about twenty minutes. What both saves time and adds convenience is the airport baggage check in at the station.

The ICC Tower 環球貿易廣場 builders are Sun Hong Kai and the MTR Corporation. They are continuing Hong Kong's tradition of being innovators in skyscraper construction. The ICC Tower was built using innovative construction techniques, and its function as a part of a planned residential, commercial, and business complex with its own regional and HK train stations is innovative as well.

The building was built between 2007 and 2010. Its world-class transportation system and building a joint residential and business complex were major design goals.

They wanted the building's shape to match well with the IFC Tower and to enhance the overall beauty of Victoria Harbor. The stylistic effect of their twin towers is that of twin light towers standing at the entrance of Victoria Harbor.

Hong Kong has a legacy of innovating construction techniques and record-breaking construction projects. For example, in 1989, Hong Kong became the first city outside of the US to have a skyscraper. It is called the Bank of China Tower. It had innovative design features.

Modern times demand innovative construction. In the past, business people and financiers around the world preferred to work downtown and live in the suburbs.

In Hong Kong's case, that meant they worked in Central, Admiralty and Wan Chai and lived on Victoria Peak, the Midlevels area or on one of the islands. That was when when regional and international travel required relatively a lot of time.

Now, faster air travel, faster regional travel and the quicker pace of financial markets is making being able to work and live at the same place very important. The ICC Tower is innovative in fitting together fast transportation systems, residences, the mall, the hotel, and businesses in a planned community.

Sun Hung Kai has a history of being engineering innovators. They built the IFC Tower that is the second tallest building in the city, Park Island Apartments, Noah's Ark Theme Park, and numerous other projects. They innovated skyscraper construction techniques for this building.

They installed double-deck elevators to save space and make elevator travel quicker. These are the first such elevators in Hong Kong.

They also utilized new high-strength concrete that was pumped up to the top of the building using a new kind of pump. This new kind of pump conveys concrete 1,000 feet higher than pumps could previously. This saved money.

China Highlights specializes in tours for individuals and groups that and personalized and tailored according to customer wishes.