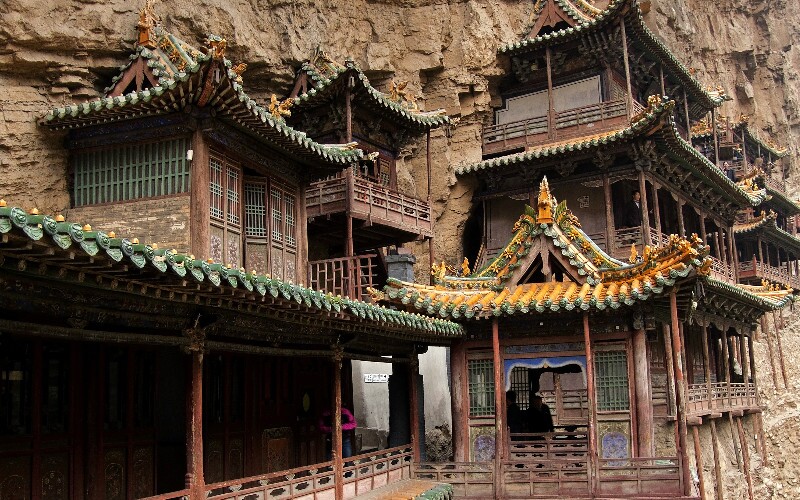 Datong is the second biggest city in Shanxi Province, and is famous in China as a historical city. It is about 350 km (210 mi) west of Beijing. Here are 10 interesting facts you should know before visiting Datong.

A statue in the Yungang Grottoes

The Yungang Grottoes were built in 460 AD. They are excellent representations of Buddhist art in the 5th and 6th centuries. In 2001, they were made a UNESCO World Heritage Site.

The Yungang Grottoes are one of the four famous grottoes sites in China. They are the must-see attraction when vising Datong.

2. Datong's Nine Dragon Screen Wall is the biggest one in the World.

3. Datong has lots of historical sites.

Datong is one of the "nine ancient capitals in China". It is famous for its abundant historical sites. With a Buddhist history of over 1,500 years, Datong's architecture, statues, and sculptures showcase Buddhism in China magnificently.

Datong is rich in high-quality coal. As a major coal provider in China, it is known as the "coal capital". It developed into one of China's most polluted cities due to its heavy coal use.

Pollution has been reduced in recent years to significantly less than Beijing's, and can be avoided largely by visiting in the warmer months.

5. It was the first place in China to experience Buddhist persecution.

Buddhism developed fast in the Northern Wei Dynasty (386–534). Due to temples becoming too rich and powerful, Emperor Wu(562–578) of the Northern Zhou Dynasty (557–581) issued laws to forbid Buddhism. To better control the country, he confiscated Buddhist leaders' land and gave it to the soldiers.

6. It has been an important crossroads from imperial times till the present.

Datong is six days' march west of Beijing, on the border of Shanxi Province, Hebei Province, and Inner Mongolia. It was an important military stronghold in ancient times, and its special location makes it an important crossroads connecting Northern China and Northwest China nowadays.

Datong was founded and named Pingcheng in 200 BC, after a battle between the Han Empire and the Xiongnu.In 398 AD, it became a capital city of the Northern Wei Dynasty(386-581).

8. Datong has a section of the Great Wall of China.

Datong has a section of the Great Wall of China.

Datong's Great Wall section is 335 km(201 mi) in length. It was built from the 4th century BC and maintenance was discontinued in the 18th century. It has a history of over 2,100 years. It was reported that there are 1,878 sites with Great Wall remains in Datong.

It is recorded that Marco Polo visited Datong when it was under the control of Kublai Khan in the Mongol-led Yuan Dynasty era (1279–1368). His travelogue Travels of Marco Polo praised Datong's weapons manufacturing industry and the Yungang Grottoes.

10. It's best to avoid Datong's winter when visiting.

The Hanging Monastery in winter

The best time to visit Datong is from April to October. Spring is windy and dry, summer is temperate with moderate rainfall, and autumn is cool, dry and sunny.

Winters are long and very cold in Datong. Though dry,the wind chill and sub-zero days, not to mention most of the year's pollution, make it difficult to enjoy being outside from November to March.

Do you want to discover more about Datong, get the most out of the sights, and find the best places to eat? Our expert tour designers and tour guides can help you with that.

See our most popular Datong itineraries for inspiration. If they do not cover all you are interested in, they can be customized:

We can also help you plan a unique tailor-made Datong/China tour based on your requirements.