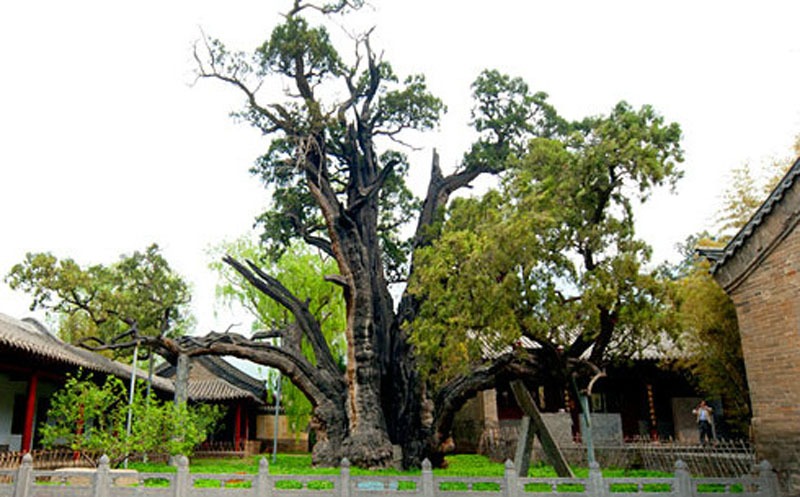 The academies were a unique form of higher education in the society of China. The system appeared in the Tang Dynasty, reached its peak in the North Song Dynasty, and came to an end at the end of the Qing Dynasty, which was only about 100 years ago.

You can see the style of the Qing Dynasty in the layout of the academy. More than 500 rooms still exist so far in the academy.

Outside the gate, there is a tablet inscription of the Tang Dynasty which is called the "King Tablet of Songshan Mountain". The very old trees and tablet are just two of the ancient relics in this ancient academy.

In the yard of the academy there are two weirdly shaped giant "General Cypresses" that were planted in the Han Dynasty, which stand opposite to each other. One of them is separated from the middle of the trunk and the other is resting on the wall. Some experts and scientists said that these two cypresses can still live for about 1,000 years.

The 5 Areas in the Academy

Firstly, the Xianshi Temple is a place where teachers and masters of the past are enshrined. Behind it is the lecture hall and then the Daotong Temple. And behind the Daotong Temple lies the Book Collection Building. The rooms on both sides are book rooms, classrooms and so on. On the walls of the bungalows in the yard, there are inscriptions of the scholars of the past dynasties. The content and calligraphy of those inscriptions have their own characteristic styles. In the west, some buildings stand which were used as classrooms and examination rooms during the Qing Dynasty.

Songyang Academy was called Songyang Temple in the past. Songyang Temple was created in the 8th year of Taihe, during the reign of Emperor Xiaowen of the Northern Wei Dynasty. The temple had several hundred monks, and Songyang Temple used to be where Buddhist activities were held.

During the years of Daye, in the reign of Emperor Yang of the Sui Dynasty, the temple's name was changed to Songyang Taoist Temple, and it was where Taoist activities were held. In the 2nd year of Jinghu, during the reign of Emperor Renzong of the Song Dynasty, the Songyang Taoist Temple became the Songyang Academy, a major Confucian academy. Then, the Songyang Academy was an educational institution where famous scholars gave lectures on classics.

At the end of the Qing Dynasty, the Imperial Civil Examination System was abolished and new schools were set up. As a result, the Confucian academic system that had a history of over 1,000 years came to an end. However, as a bright pearl in the educational history of ancient China, the Songyang Academy would be written into the annals of history.