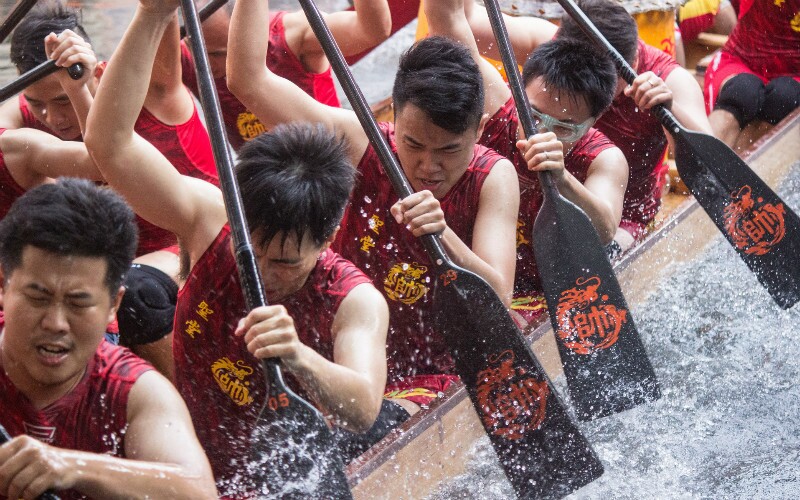 It is a traditional holiday that falls on the fifth day of the fifth lunar month in the Chinese calendar.

In 2023, Tuen Ng Festivalfalls on June 22 (Thursday). In the Chinese mainland, it is a 3-day national holiday, but it is a one-day public holiday in Hong Kong.

The Origin of Tuen Ng Festival

As per the legend, Tuen Ng Festival originated from the death of Qu Yuan, a patriotic poet of the State of Chu during the Warring States Period.

He waded into a river to drown himself and died soon after his beloved homeland’s sovereignty on the fifth day of the fifth lunar month, which is when the Dragon Boat Festival is now held. Qu’s body could not be found, so local people raced out in their boats and dropped sticky rice dumplings into the river to keep fish and evil spirits away from the poet’s body.

Thus began the traditions of dragon boat racing and eating rice dumplings on the fifth day of the fifth lunar month.

However, some people found that Tuen Ng actually started before the death of Qu Yuan. It was a dragon-related festival to start with, and the dragon boat race did not take place on Tuen Ng day until the Ming dynasty. Dragon is the god that rules the water world.

Dragon Boats feature the head and tail of a dragon. After the dragon boats sailed in the water, the water is blessed and people nowadays still swim in this ‘dragon boat water’ hoping to stay healthy for the rest of the year. See more legends behind the festival.

When the Tuen Ng Festival approaches, the waterways around Hong Kong come to life with hundreds of dragon boats competing against each other.

Racing these long boats on Tuen Ng Festival is an old tradition. In the past, mainly fishermen competed. Nowadays, it has become an international sport event and teams even come from overseas to compete.

These long canoes mimic the old war canoes of the past. The crews paddle to the beat of a drummer. Various heats and competitions are held around the region, and boats vary in size from 20 to 80 people.

The shores are crowded with visitors. Food markets are everywhere and music and live entertainment fill the air with an atmosphere of excitement. See more about dragon boat racing.

The CCB and Stanley races are the biggest and maybe televised.

The CCB competition is an international event pitting teams who won in competitions in other countries and regions. Thousands of competitors and tens of thousands of their supporters gather on the various race days. Crowds can watch these races accompanied by various festivities, parades, and entertainments.

The Stanley Race is a quite popular local event. The races started in the 1960s from a small village and grew so that now paddlers from more than 280 local organizations compete including local companies, universities, and international corporations compete.

The races include both expats and locals and teams of men and women contestants. About 30,000 spectators may watch.

Along with the big Stanley Beach race day, there are also smaller competitions at about eight other locations including Aberdeen, Sai Kung, Sha Tin, Cheung Chau, Discovery Bay, and Tai O. These are generally local competitions for people living in that particular town or island area. These races are usually combined with other traditional Chinese festivities such as parades or carnivals.

Apart from watching the races, or indeed participating in them, eating traditional sticky rice dumplings called zongzi (‘joong’ in Cantonese) is another important thing to do during the Tuen Ng Festival.

In the past, every family would make sticky rice dumplings and pass them out as gifts, receive them, and eat them. Today only a few of the more traditional older family members will bother to cook their own, while the majority are purchased from restaurants and bakers.