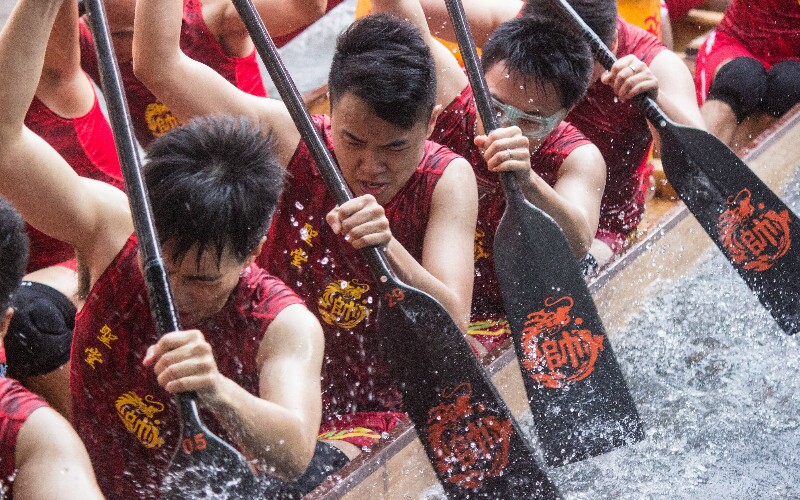 Dragon boat racing is the most popular activity during the Dragon Boat Festival. This folk custom has been held for more than 2,000 years throughout southern China, and now it has become an international sport.

A dragon boat is a human-powered wooden watercraft. It is shaped and decorated in the form of a Chinese dragon. Dragon boats vary in size by region, and the crew numbers change accordingly. Generally it is about 20–35 meters in length, and it needs 30–60 people to paddle it.

During the race each team has a drummer in the head of the dragon boat; the drummer is the heartbeat of the team. Dragon boat teams paddle harmoniously at a pace which is set by the drummer, and do their best synchronized efforts.

Qu Yuan (343–278 BC), was a Chu State official in the Warring States Period. He was the earliest famous poet in China. See Qu Yuan Ancestral Hall for more about Qu Yuan.

When the Chu capital fell the patriotic poet drowned himself in the Miluo River. The local people were said to have paddled out on boats, either to scare the fish away or to retrieve his body. The dragon boat races represent the attempts to rescue and recover the body of Qu Yuan. This is said to be the origin of dragon boat racing.

The custom of dragon boat races probably began in southern China, where the 5th day of the 5th lunar month was a totem ceremony. The dragon was the main symbol on the totem, because the Chinese are said to be the sons of the dragon. They also made dragon-like canoes.

Dragon boats racing with drummers to keep the rhythm standing in the canoes.

Later Chinese connected this custom with Duanwu Festival, which came to be known as the Dragon Boat Festival. Since this custom was only practiced in southern China, this might be why dragon boat racing isn't that popular in other parts of China today.

Read more about The History and Legends of the Dragon Boat Festival.

Now dragon boat racing is an international event. This sport is popular in the USA, Canada, Europe, Australia, Taiwan, Hong Kong, and Singapore. Some dragon boat races aren't held around the Dragon Boat Festival. Some are in July, August, or September. You need to check their websites for the schedules.

Where to See Dragon Boat Races in China?

Dragon Boat Festival is one of China's traditional festivals; many places in China will hold Dragon boat races to celebrate the festival on the fifth day of the fifth lunar month, especially in southern China. Here are four recommended places to see dragon boat racing:

Dragon Boat Festival is a national holiday in China. Chinese people will enjoy a 3-day holiday, most people will go traveling during the festival, therefore attractions and transportation will be crowded, and accommodation may be slightly more expensive.

See below the most popular China tours: