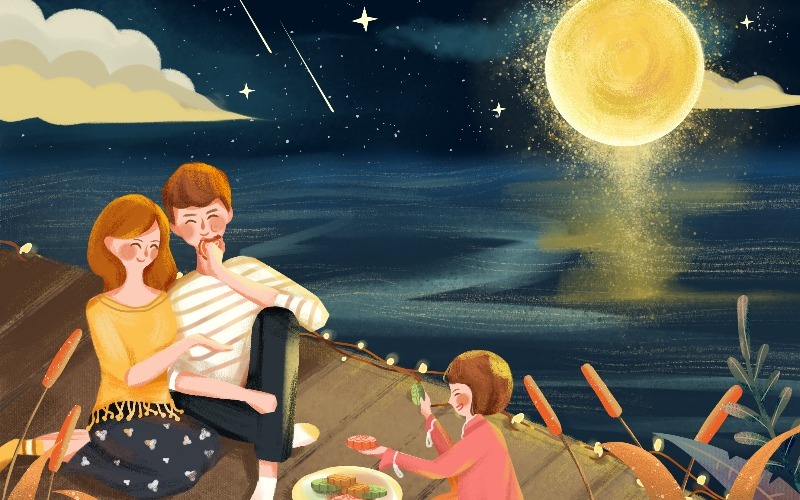 Mid-Autumn Festival, Zhongqiu Jie (中秋节) in Chinese, also known as the Mooncake Festival or Moon Festival, is one of China's biggest holidays. The festival is a joyous celebration with family reunions, mooncakes, parades, and lanterns.

Mid-Autumn Festival is also a popular observance in many other Asian countries such as Japan, Korea, Malaysia, and Singapore, but with different names. The festival date in these countries is the same as in China.

Mid-Autumn Festival is held on the 15th day of the 8th month of the Chinese calendar, which is in September or early October on the Gregorian calendar.

In the Chinese mainland, people usually have a three-day public holiday for Mid-Autumn Festival (using 2 weekend days for 5-day week workers, so it only uses one day of statutory holiday).

In Hong Kong and Macau, the day after the Mid-Autumn Festival is a public holiday rather than the festival date itself (unless that date falls on a Sunday, then Monday is also a holiday), because many celebration events are held at night.

In Singapore and Malaysia, the Moon Festival is not a public holiday officially.

How Is Mid-Autumn Festival's Date Determined?

Mid-Autumn Festival is held on the 15th of the 8th lunar month in the Chinese calendar, within half a lunar month of the autumn equinox (from about Sep. 6 to Oct. 6).

On the Chinese lunar calendar, the 8th month is the middle month of autumn and the 15th is its middle day. As, traditionally, the four seasons each have three lunar months, day 15 of month 8 is "the middle of autumn". So it got its name.

The date of the festival is a full moon, and that is why it is also called the Moon Festival. On the 15th of each lunar calendar month, the moon is at its roundest and brightest, symbolizing togetherness and reunion in Chinese culture.

Why Is Mid-Autumn Festival So Early in 2023?

What to Expect for Mid-Autumn Festival 2023

People will reunite with their families and friends, and see lanterns lit, buy and exchange mooncakes, visit temples, and attend celebration events.

In cities such as Beijing and Shanghai, there might be lantern exhibitions with traditional stage shows. See more Mid-Autumn Festival traditions in China.

In Kuala Lumpur, there will be dragon and lion dances, artists and youngsters performing dances and songs, and floats carrying the seven maidens including Chang'e in the lantern carnival. The Mid-Autumn Festival Lantern Show will also be held at Thean Hou Temple.

In Penang, the ‘River of Lights' lantern parade will be held in Georgetown. Besides the lantern parades, locals will also perform traditional lion dances and wushu (martial arts). See more details about Mooncake Festival in Malaysia.

How to Eat Mooncakes during Mid-Autumn Festival: 12 Useful Tips Help You Eat Without Shame