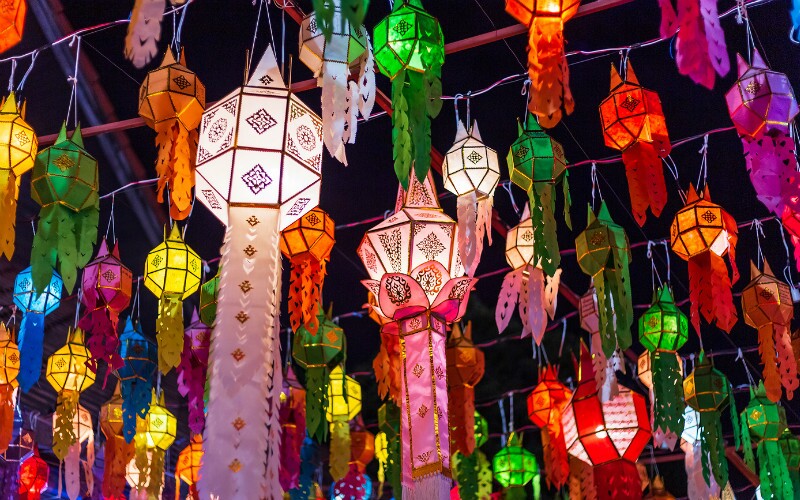 When Is Mid-Autumn Festival 2022 in Vietnam?

This year, the Mid-autumn Festival will be held on September 10th, 2022, in the middle of the eighth lunar month.

The festival is not a public holiday, but in many parts of the country, there are events activities, and decorations to mark this special day on the annual calendar. See How the Date of Mid-Autumn Festival Is Determined.

How Do the Vietnamese Celebrate the Mid-Autumn Festival?

Various activities are held to celebrate the Mid-Autumn Festival in Vietnam. The main activities include worshiping the God of Earth, carrying carp-shaped lanterns and watching a lion dance parade.

It's a tradition for the Vietnamese to make and carry lanterns during the night of the Mid-Autumn Festival. It is a happy time for children. Parents will spend time making lanterns for their children or buying them from the stores.

A legend states that a carp spirit once killed many people during the night of the Mid-Autumn Festival, so that no household dared to go outside during that night.

Later, a wise man thought of an idea: he made a carp-shaped lantern with a stick in its belly, and then advised people to walk at night holding a carp-shape lantern. The carp spirit was terrified by the light from these lanterns, and has not dared to go out to kill anyone during the Mid-Autumn Festival since then.

Nowadays, children hold various kinds of paper lanterns and play in the moonlight, while eating mooncakes during the evening of the Mid-Autumn Festival.

Before Mid-Autumn Festival, mooncake stalls appear on every other corner, pop-ups with elaborately decorated boxes filled with a variety of mystery cakes and fillings. There is a wide range of mooncakes in Vietnam with different kinds of crust and fillings. They also come in different shapes and sizes. People buy mooncakes to worship ancestors, share with families and give them to their loved ones as gifts.

3. Worshiping the God of Earth

Usually, a worshiping platform is set up in the yard during the night of the Mid-Autumn Festival, on which mooncakes, fruit, and snacks are laid. Later, family members sit together to eat the food while appreciating the moon.

The platform is not taken down until midnight when the food has been completely eaten. Most families also set up a special platform for children, so that they can enjoy food at any time during the evening.

At night, groups of children parade through the streets, going from door to door and asking the owners for their permission to perform the lion dance. If it is agreed, then the children will put on a show, which is believed to bring luck and fortune. Afterward, the owners will give the children 'lucky' money for their gratitude.

These lion dances are fascinating, and huge numbers of children, ranging from little kids to teenagers, participate in this activity. As a result of having so many groups of children marching around, the streets of the cities echo with the sound of drums, as dozens of lions roam about.

Top Places to Celebrate Mid-Autumn Festival in Vietnam in 2022

The Hoi An Lantern Festival celebrates the full moon, and it is also known as the full moon lantern festival. It usually takes place every month, on the 14th day of the lunar month.

As the name suggests, the biggest feature of this festival is the lanterns. Lanterns are beautifully lit in and around the old town. You can walk around the wonderful ancient town, and not only can you enjoy colorful lanterns, but also see locals playing Chinese chess, folk performances, and live music. You can also take a Sampan ride on the Hoai River, which is perhaps the best way to take in Hoi An Lantern Festival's magical atmosphere.

As the Mid-Autumn Festival is nearing, Hanoi Old Quarter become super exciting and colorful. Many streets in the Old Quarter are filled with brilliant colors of lanterns, star-shaped lanterns, paper masks, traditional toys, and decorative items.

Tuyen Quang City is not a popular destination for foreign tourists. Interestingly, it holds the biggest Mid-Autumn Festival celebration in Vietnam. In Tuyen Quang, the whole city will celebrate this together. Thousands of people of all ages and genders will walk on the street along with huge lanterns of all unique shapes and colors like the parade. There are several huge lanterns that are bigger than a whole bus.

In Saigon, there is a variety of places to celebrate the Mid-Autumn Festival. Luong Nhu Hoc Lantern Street is a great place to go. The whole area is lighted up by countless beautiful lanterns in uncounted different shapes.