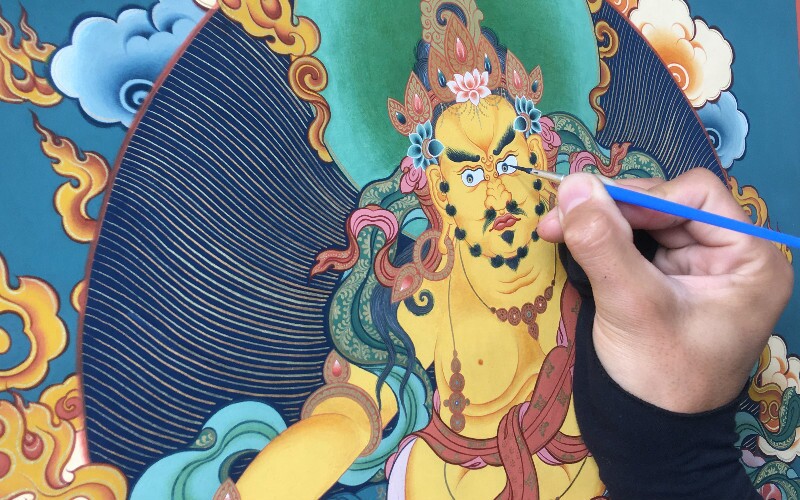 The Thangka Unveiling at Tashilhunpo

Between the 14th day and the 16th day of the fifth Tibetan lunar calendar month, there is an annual Thangka worship festival where huge Thangka pictures are displayed at the Tashilhunpo Monastery in the city of Shigatse.

The several large Thangka festivals in Tibet are very important for Tibetan Buddhists. During the three-day festival, people will be able to view three big pictures painted on cloth of different Buddhas.

This worship has been going on for about 500 years, and it is an important festival for the old monastery. During the celebration, tourists can see huge pictures of the Amitabha Buddha, the Sakyamuni Buddha, and the Byams-Pa Buddha or Maitreya Buddha as well as see the buildings of the large Buddhist monastery complex that was founded in 1447.

Travel with China Highlights to experience this festival.

Crowds come to surround the three Buddha Thangkas that the monastery unveils annually. They take the opportunity to pray. The Thangkas are first covered with huge sheets of cloth.

Then, they are unveiled for the crowds of people. Some of the Tibetans are dressed in traditional clothes. They stand on the nearby slopes to view the pictures. The Thangkas are colorful and each portrays a Buddha.

Pictures of three Buddhas are presented. The pictures are very big. They look to be half the size of a basketball court. On the first day of the three-day festival, the Amitabha Buddha is unveiled.

The Amitabha Buddha is said to be an advanced Buddhist monk named Dharmakara who vowed to save all beings. He made a heavenly realm for people to live in called the Pure Land if they need his help.

These teachings were found in Buddhist scriptures that were brought to China from Central Asia about 147 AD. The teachings became popular in East Asia after the year 402 through the work of a monk named Huiyuan and another monk named Shandao.

Pure Land Buddhism that emphasizes the Amitabha Buddha as a universal savior developed during the Tang Dynasty era and spread to Japan where it is still popular.

On the second day of the festival, the picture of the Sakyamuni Buddha is revealed. The Sakyamuni Buddha was Gautama Buddha who traveled widely in the Indian sub-continent region teaching about enlightenment to the Hindu people sometime between the years 560 BC and 400 BC.

He preached to people of various castes and to the rich and poor, and this broke the tradition, and opposition arose against him and his followers.

When people say “Buddha,” they usually are referring to him. He is generally regarded as the first and greatest of the five great Buddhas.The Maitreya Buddha is a Buddha who is said to come in the future.

In the Tibetan language, he is called Byams-Pa, and in Chinese, he is called Mile-fo. He is expected to come in the future as the fifth and last of the Buddhas.

In early Buddhism, Maitreya was said to dwell in the Tusita heaven (the realm of the fully-delighted gods) and to wait for the decline and eclipse of Buddhism when he will come to the world in about 30,000 years time.

This belief was further developed in Mahāyāna countries, and in Tibet, many of the Buddhists are preparing for his coming. He is usually depicted with feet placed on the ground as he enters the world.

The Tashilunpo Monastery was historically the seat of the Panchen Lama. The Panchen Lamas are monks selected to be Lamas. Lamas are people who are thought to have a Buddha in them.

In Tibetan Buddhism, Panchen Lamas are second-ranked lamas after the Dalai Lamas who traditionally lived in Lhasa. Historically, they played a role in selecting Dalai Lamas, but they had little land.

It is said that the monastery and temple were founded by the first Dalai Lama in 1447. In 1791, an army attacked it, but they were driven out. In the 19th century, the temple was said to be extraordinarily adorned and magnificent.

About two-thirds of the large monastery complex was destroyed during the Cultural Revolution in the 1960s.

The temple is now surrounded by smaller houses and buildings, and it may be difficult to get a good view. But there are still halls remaining, and some remaining monks still sometimes chant and play instruments in the morning.

The Maitreya Temple that was built in 1914 has a big Maitreya Buddha statue that is said to have been made of about 300 kilograms or more than 600 pounds of gold. Maitreya worship was a significant part of the temple’s history.