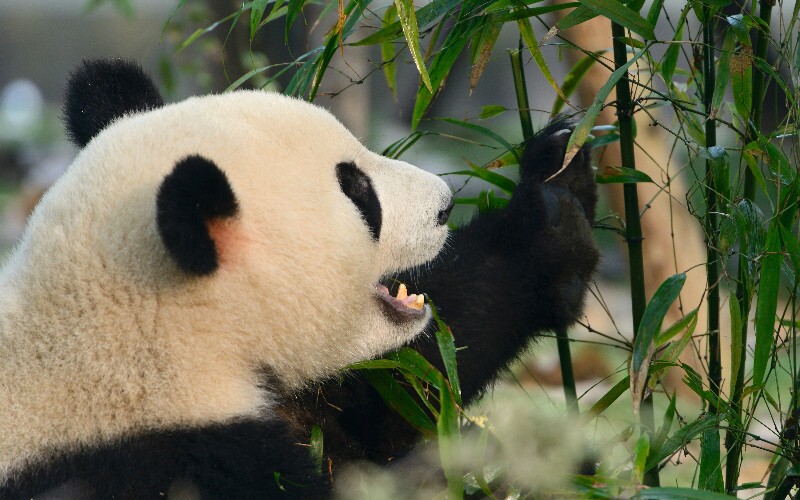 China has tried hard to protect its lovely giant pandas. Most panda conservation work has involved protecting their habitat, making laws to punish hunters and smugglers, and captive breeding.

On September 5th, 2016, the IUCN announced that giant pandas had been removed from the endangered list. Now their new designation is "vulnerable".

The government has adopted a three-pronged approach to promote the survival of the giant panda as a wild animal species:

The most important work to save the giant panda is to protect their habitat. Without this, pandas could only survive in captivity.

To protect giant panda's habitat, China government has set 13 panda nature reserve areas. In the areas, farming fields have been left to grow back as forest. Trees and bamboo have grown well, and habitat are recovering. Also farming practices around the forests have been reduced or separated from the reserve areas.

According to government research in 2015, habitat for giant pandas has grown by about 2,720 km2, (almost the area of Yosemite National Park), compared to in 2003. At 25,770 km2, panda habitat is now almost twice the size of Serengeti National Park.

In the reserve areas, conservation staff live and work to rescue sick or starving pandas, and to stop smugglers from hunting giant pandas.

In 1980s, much of the bamboo on the Qionglai Mountains (the giant panda's main habitat area) died. Thus many giant pandas were starving, and were rescued to Chengdu Zoo.

In 1987, to separate the research work, the Chengdu Panda Center was established for giant panda research. The original six starving giant pandas have bred more than 150 pandas since then!

Unlike ordinary zoos or attractions, panda research centers focus on research and breeding. There are several panda centers around Chengdu to breed pandas, educate people about protecting pandas, and to do research to help save this lovely species.

Some research centers, like Dujiangyan Panda Valley, prepare the captive-bred pandas to be introduced into the wild.

3. Laws and Stiff Penalties - Over 10 Years in Jail for Hunting or Smuggling Giant Pandas

Giant pandas are the national treasure of China.

The giant panda is known as the 'national treasure' of China. It's one of the "first class protected species" according to China's Wild Animal Protection Law.

Now the law states that panda hunting/smuggling carries a minimum jail sentence of 10 years and a fine. Life imprisonment and the death penalty may be employed in extreme cases.

Why the Giant Panda was Endangered - Mainly Habitat Reduction

There are many reasons that caused giant pandas to be endangered. But the main reason was disappearing habitat.

1. Giant panda habitat was reduced gradually by farming and forestry. As China's population increased around giant pandas' habitat the forest was cut down by hill farmers.

2. Because their habitat was decreasing, giant pandas had to move up to higher mountain areas, which had few bamboo species. When these species declined, giant pandas didn't have enough food.

3. Giant pandas only give birth to 1 or 2 cubs at a time. However, especially in a tougher environment, they usually can't raise both. They usually get pregnant every two years at most, but the decreases in their population made it increasingly difficult for females to find a mate, so reproductivity decreased.

4. After giant pandas were discovered by foreigners in the late 1800s, more were poached, and many more were shot for their fur. Though poaching stopped after the 30s due to war and the new regime, locals continued to hunt pandas for food and fur, and smuggling was again rampant in the 80s.

The giant pandas couldn't adapt quickly enough to their environmental changes and human persecution, and were declared endangered in 1990.

See How China Protects Its Giant Pandas for Yourself

If you are interested in seeing giant pandas, and want to visit a research center or panda habitat in person, don't hesitate to contact us to create a panda tour according to your interests and requirements.

You can see our interesting giant panda experiences below for inspiration.