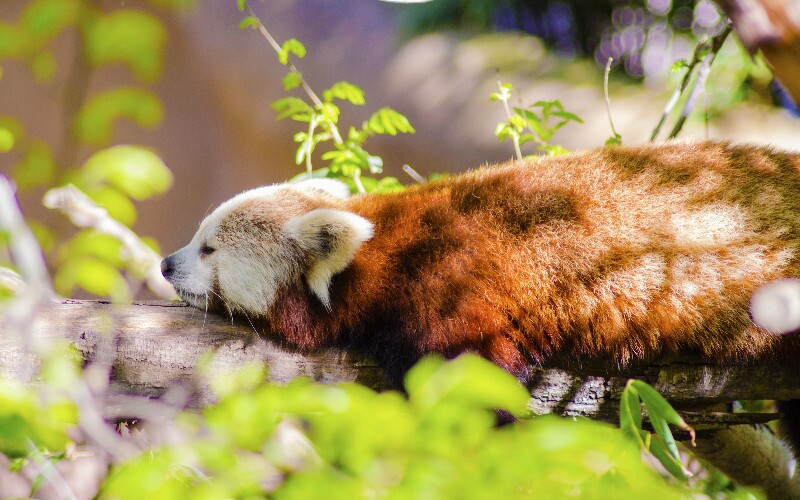 China is of course known for the famous giant panda, but that is absolutely not all of the wildlife it has to offer! In fact, that isn't even all of the pandas China has to offer!...

Another incredible creature that you cannot find in most other countries is the red panda. These are red/brown creatures that have long, fluffy, striped tails like raccoons, faces and diets that resemble a giant panda's, but clean themselves like cats.

There are probably many things you don't know about red pandas. Read on for interesting and surprising red panda facts and answers to red panda FAQs.

The red panda is named after their the color of their fur, which helps keep them warm in cooler climates, and which camouflages them in fir trees.

They also have white markings on their faces, with red 'tear tracks' from their eyes to the corner of their mouths. Research shows these marks potentially help to keep the sun out of their eyes!

2. What is the difference between red and giant pandas?

Red pandas and giant pandas are very hard to confuse as they are much more different than their names suggest.

Red pandas are a lot smaller - they are about as big as a domestic cat! They also belong to different animal families (see question 3!), and they are not the same color. While giant pandas are black and white, the red panda is, as the name suggests, more red with brown and white features.

3. And what are the similarities between the red and giant pandas?

Apart from their diet similarities, both red and giant pandas have a modified wrist bone that acts like a thumb, helping them to grasp bamboo when feeding!

For a detailed comparison of giant pandas and red pandas, see Red Pandas vs Giant Pandas: Differences and Similarities.

4. How big exactly are red pandas?

The fully-grown red panda is approximately 5kg in weight (11 lb), compared to the weight of an adult giant panda which is at least 70kg (150 lb)!

5. Are they members of the bear family like giant pandas?

Red pandas are not members of the bear family.

Red pandas are not members of the bear family, unlike giant pandas. Red pandas are members of the same family as skunks, raccoons, and weasels, but have recently been placed in their own family, Ailuridae. They have no living relatives, and their nearest fossil ancestors lived 3-4 million years ago!

6. Why do red pandas have long tails?

Red pandas' long and bushy tails are used for balance as they climb from branch to branch in the trees, and they can use them for warmth by wrapping them around themselves.

7. Where do red pandas live?

Red pandas live in the Eastern Himalayas and the range's foothills, in countries such as China, Nepal, Bhutan, and into Myanmar. They live in forests, and spend a lot of their time up high in the trees, with claws to help them move from branch to branch.

Bamboo makes up 85-95 percent of their diet, but they can only digest about 24% of the bamboo they eat. This means they need to consume 20-30% of their body weight daily!

Red pandas are usually quiet but those who have come really close say that they sometimes squeal, twitter, and huff-quack a little.

Red panda cubs look just like small bears, with a light brown coat, pink paws and snouts. The red pandas' gestation period is anywhere between 90 and 145 days, and most female red pandas give birth to one to four young.

11. Why are red pandas endangered?

Red pandas are endangered because the trees in which they nest are being chopped down and their habitat is dissapearing, and there has also been a decrease in their diet staples such as bamboo.

There are only an estimated 10,000 red pandas left in the wild. Because they are mostly active at night it is hard to get a firm count.

Some estimates do put this number at a shockingly low 2,500.

Red pandas live between 8 to 10 years in the wild, but can live longer (up to 15 years!) when in captivity in zoos.

Red pandas are solitary animals, usually living alone. If they are traveling together it is usually a pair or a family.

The male red pandas are territorial, and will mark their territory with a strong odor from the scent gland (similar to skunks this smell can also be released to fend off a predator).

16. Which panda was named first?

17. When are red pandas most active?

Red pandas are nocturnal, and most active at both dawn and dusk. You will find them active during the day too, but not during the hottest parts of the day (similar to giant pandas!)

Red pandas clean themselves. They do this through using their paws, in a similar way that domestic cats do. This is really cute to see!

19. When were they first seen?

The first known record of the red panda was on a Chinese scroll from the 13th century! We do know that they have been around for much, much longer than that.

20. Where to see them in China today?

You can see red pandas in many of the giant panda sanctuaries, including the Chengdu Giant Panda Breeding and Research Base in Chengdu, Sichuan province, or the Dujiangyan Panda Base also in Chengdu.

You can also find them in zoos in China, such as the Beijing Zoo and the Guangzhou Zoo.

Giant panda cubs photographed by one of our customers. Read more about their experience.

If you want to see red pandas during your time in China, please let us know when you are booking your trip so we can make sure to build these amazing creatures into your itinerary!