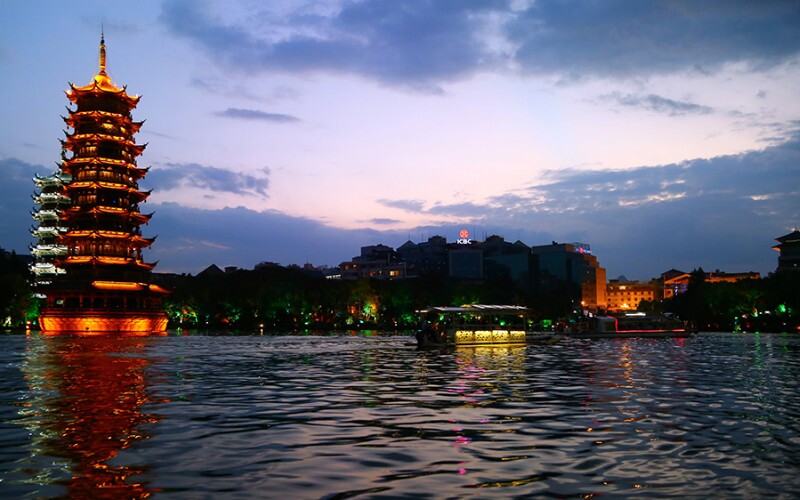 The Two Rivers and the Four Lakes

Guilin's showcase two rivers (the Li and the Taohua) and four lakes (Rong, Shan, Gui and Mulong), are perhaps best seen from on the water itself. The Two Rivers and the Four Lakes (Liang Jiang Si Hu) form a continuous picturesque waterway through the center of Guilin City.

Banyan Lake (Rong Hu) and Chinese Fir Lake (Shan Hu) are the two largest and most famous of the lakes on the Two Rivers and Four Lakes cruise. They are located in the very center of Guilin City, either side of Zhongshan Zhonglu (Sun Yatsen Middle Road). The origin of both parks dates back to the Tang Dynasty (618-907), when they were part of a city moat. As Guilin expanded in all directions, the moat became a lake within the city area.

Chinese Fir Lake was named after the Chinese fir trees growing on the shore.

The sun and moon pagodas in Fir Lake at night

Standing in the water of Shan Hu are the Sun Tower (Ri Ta 日塔 /rrr taa/) and the Moon Tower (Yue Ta 月塔 /youair taa/). The Sun Tower is painted gold and the taller of the two. In the night it is lit with bright yellow lights. The Moon Tower has deep brown beams and aqua eaves. It outshines the moon at night, with its artificial white lights.

The two towers are open to the public and there is an underground aquarium-like viewing tunnel linking the pair. The towers are in the style of Buddhist pagodas and Buddhist music can sometimes be heard emanating from them during the day.

The Class Bridge over Banyan Lake

A zigzag bridge leads to Mid-lake Isle, which is dotted with long open-sided corridors, waterside pavilions and ancient buildings. Built in the Song Dynasty (960-1279), Blue Ribbon Bridge, now called Sun Bridge, separates the lakes. The two lakes together were often referred to as Round Lake.

The 1.5-hour cruise is well worth the price as it offers a chance to view Guilin’s tranquil mountain and water scenery, along with traditional Chinese architecture, ancient inscriptions on the bridge arches and well-maintained park-style lake frontage, from the best vantage point: on the water itself.

The cruises run during the daytime and in the evening, affording the opportunity to see the scenery or the fantasy nighttime illuminations.

Take a boat to enjoy the night view of the Two Rivers and the Four Lakes.

Two kinds of cruise boats are available — standard and luxury — the cruise is far cheaper in the daytime and some cruises do not cover the entire area, so make sure you get the cruise you want.

The cruise usually begins from a pier near Liberation Bridge (Jiefang Qiao) opposite Seven Star Park. The cruise boat heads up the crystal clear Li River past a verdant green island to Folded Brocade Hill (Diecai Shan). Round the back of the hill there is a system of lock gates, which lift the boat up to the level of the city lakes.

The cruise then proceeds round the movie set quality recreated Chinese architecture of Wooden Dragon Lake. If the tour is taken at night this and all the other lakes are beautifully lit to bring out the shapes of the trees and architecture. On a good day, under the light of the sub-tropical Guilin sun, the tour is a chance to go sightseeing from the coolest place in the city: on the water.

Next is Osmanthus Lake, where one can appreciate the luxuriant and well-tended osmanthus foliage surrounding the water. On the boat goes, under bridges decorated with pictures and Chinese script telling stories of long ago, to Banyan Lake. There one can see a musical, spotlit (at night) show of fountains, rising and falling from the lake itself.

The boats then make a circuit of Chinese Fir Lake, which is not only surrounded by Chinese Firs, but also bamboo, osmanthus and many other trees and flowers. The main attractions of Chinese Fir Lake are the Sun Tower and the Moon Tower, twin pagoda-style towers that are majestic in the day and iridescent at night. Opposite is the looming shape and red neon letters of Guilin’s exclusive Waterfall Hotel. The whole other side of the hotel becomes a manmade waterfall, lasting for about half an hour from 8:00pm.

From Shan Hu the cruise continues to the Peach Blossom River, via a return to Rong Hu. Most cruises finish at the lock gates by Elephant Trunk Hill (Xiangbi Shan), where one branch of the Peach Blossom River joins the Li River. However, the boat could descend in the lock gates with passengers and return to the Liberation Bridge pier past the front of Elephant Trunk Hill.

Walking Around the Lakes

Walking around the lakes you can feel more about the beauty of the Two Rivers and the Four Lakes.

Another way to enjoy the beautiful scenery along the lakes is to take a walk on its banks. The walk can be done both for daytime and the evening, as the lake colorfully lit. See our recommended Two Rivers and Four Lakes Circuit Walk.